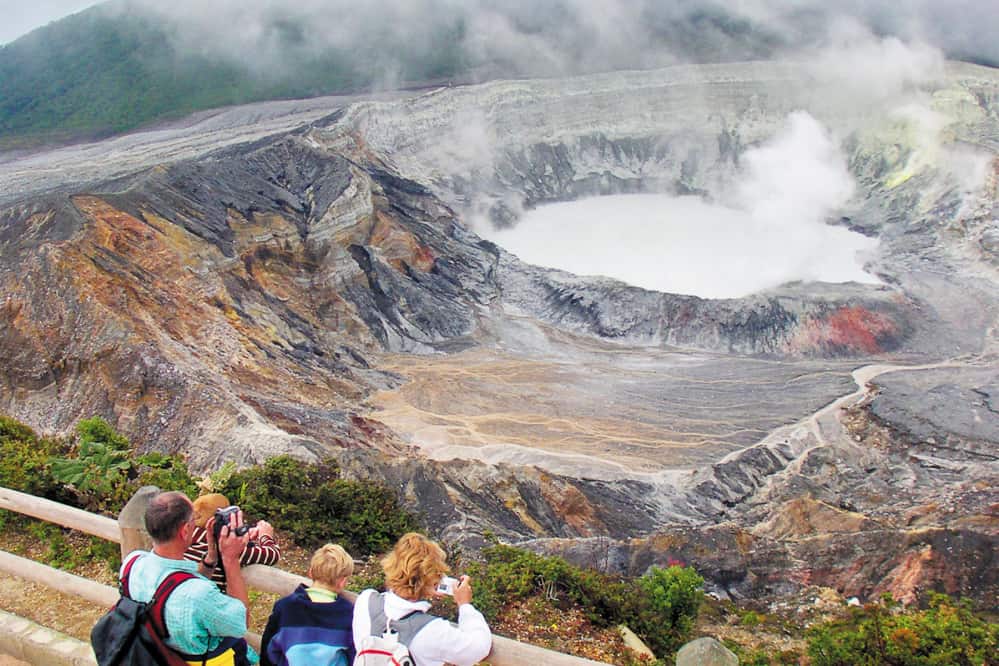 Visitors to Poás Volcano National Park can safely view the volcano's main vent from a distance of almost 1 kilometer. (The Tico Times)

Most people visit Costa Rica’s volcanoes to admire their beauty, but one man apparently had a different idea.

The news website CRHoy.com posted a video Thursday reportedly shot on June 7 showing a man who had driven his truck past several security checkpoints up a pedestrian walkway in Poás Volcano National Park to the overlook at the edge of the crater. There, he parked, grabbed a bag from the bed of his truck and proceeded to throw it over the fence and into the crater.

Shocked tourists looked on as a park guard rushed the man to restrain him. Among the items that were tossed into the crater were images of the Virgin Mary as well as religious flyers and other objects, according to park administrator Redy Conejo. All the discarded objects were collected and removed from the crater. The whole ordeal lasted less than 15 minutes, Conejo said.

Conejo told The Tico Times Friday that it was a “one in a million kind of event.” In his 10 years at the park, Conejo said he had never seen anything like it.

Conejo did not hazard a guess at the man’s motivation. The man did not say why did decided to use Poás Volcano as the dumping site for his unwanted items. The man, who was not carrying any identification, was detained by National Police. Transit Police removed the truck and the case was passed on to the Judicial Investigation Police.

The park administrator said that they had already taken steps to improve security at the popular tourist destination since the incident. New cameras have been installed along with additional protocols to review vehicles.

Conejo said that despite the new measures, the park is still understaffed. As many as 3,000 people can visit the park on a single day, with as few as five guards on duty across the park’s 6,500-hectare territory. Poás Volcano sees more than 350,000 visitors annually, Conejo said. With so few guards, events are bound to happen, he said, albeit perhaps not as bizarre as this one.