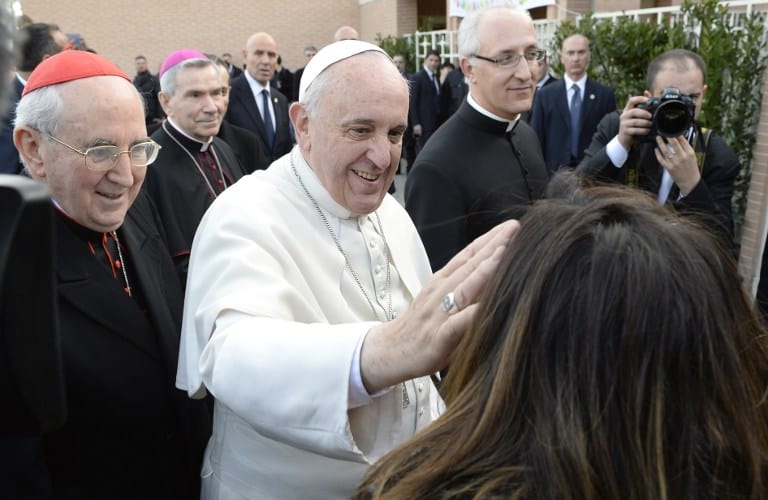 Pope Francis blesses a woman as he is welcomed by faithfuls while arriving for a visit to the parish of San Tommaso on the outskirts of Rome on Feb. 16, 2014. (AFP)

Pope Francis said Wednesday that he supports equal pay for men and women who perform the same jobs. The fact that a disparity exists, the pontiff said, is a “pure scandal.”

Francis’s comments highlighted the church’s long-standing social teachings on workers’ rights, in a speech on the importance of marriage in society.

In his Wednesday general audience remarks, Francis asked Catholics to consider “the Christian seed of radical equality between men and women” when discussing the reasons behind declining marriage rates around the world, according to Vatican Radio.

In response, Christians should “become more demanding” for that “radical equality,” the pope added. For example, “by supporting the right of equal pay for equal work.”

“Why should it be taken for granted that women must earn less than men? The disparity is pure scandal,” Francis said, according to the Italian news service ANSA.

“The witness of the social dignity of marriage shall become persuasive, precisely by this way: the way of witness that attracts,” he added.

According to the National Catholic Reporter, the pope also said it was “not true” and an “insult” to suggest that women’s rights movements should take the blame for declining marriage rates. Doing so “is a form of chauvinism that always wants to control the woman,” Francis said.

John Carr, until recently the longtime head of the social justice arm of the U.S. Conference of Catholic Bishops, said Francis’ statement is not new in Catholic teaching but that the pope is highlighting it in a notable context — saving families.

“Others talk about the moral pressures on families, but he also focuses on the economic issues. He is stating it in the context of the importance of the family, and he considers economic justice essential to the family,” Carr said.

In 1995, Pope John Paul II addressed the issue of equal pay directly in a “letter to women,” writing that “there is an urgent need to achieve real equality in every area: equal pay for equal work, protection for working mothers, fairness in career advancements, equality of spouses with regard to family rights.”

Francis’ message on Wednesday was also in line with another influential aspect of Catholic teaching on gender found in John Paul II’s work, on the “complementary” natures of men and women.

“At the same time, we must recognize the maternity of women and the paternity of men as a perennially valid treasure, for the benefit of children,” Francis said.