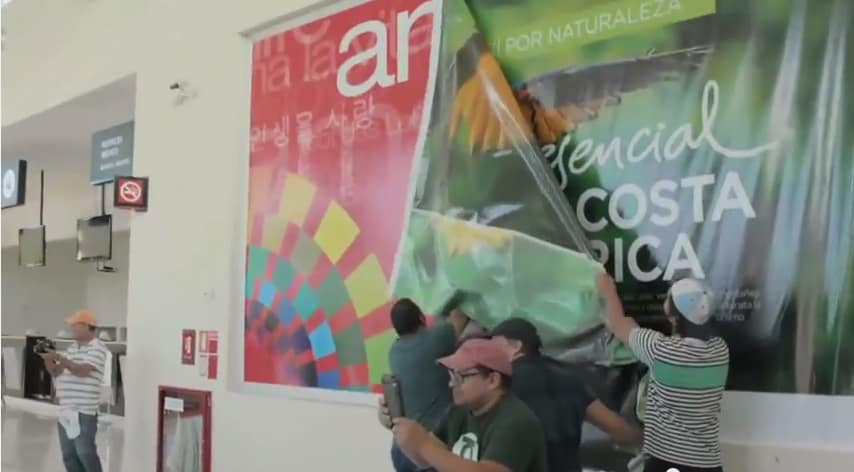 A screen shot from Ecuador's controversial tourism campaign, in which tourists were tricked into thinking they were traveling to Costa Rica, April 13, 2015. ((Courtesy La Nación YouTube))

Imitation might be the sincerest form of flattery but that’s not how Costa Rica took it.

Ecuador, looking to encourage its citizens to travel within their own country, carried out an elaborate ruse to convince a group of 40 tourists that they were taking a trip to Costa Rica.

After hiking, swimming and rafting, authorities revealed to the group that they had never left Ecuador.

The stunt carried out by the Ecuadorean airline Tame, Ecuador’s Tourism Ministry and Ministry of Transport and Public Works triggered a firm response from the Costa Rican Tourism Institute (ICT), Casa Presidencial and the Foreign Ministry. They demanded Costa Rica’s likeness be removed from all materials and issued a letter of protest, according to a statement from the ministry.

A video documenting the ruse shows the unwitting tourists boarding a plane, taking off and flying a circuitous route to simulate the trip to Golfito, Costa Rica, a destination better known to Ticos for tax-free shopping than adventure tourism.

The video shows the travelers swimming, whitewater rafting and even buying fake Costa Rican trinkets at the airport.

Road signs were altered to complete the illusion and organizers used cellphone and GPS jammers to keep passengers from using their phones to discover the hoax, the video shows.

At the end of the trip, the campaign organizers tore down an “Esencial Costa Rica” banner that had been posted at the airport to reveal the Ecuadorean tourism slogan: “love life.”

The organizers took the video off the web after Costa Rica complained. But the daily La Nación reposted it.

Costa Rica’s acting Foreign Minister Alejandro Solano expressed the government’s displeasure with the campaign on Sunday. The Ministry said Ecuador agreed to release an apology for the campaign gone awry.

“We’re unhappy about their use of our country to trick their people into getting to know their own country,” Tourism Minister Wilhelm von Breymann told The Tico Times Monday.

Von Breymann said that ICT and Procomer’s lawyers were looking into possible legal action over the misuse of Costa Rica’s national brand.

Costa Rica has its own initiative, “Vamos a turistear,” to encourage more domestic tourism.

National Tourism Chamber President Pablo Abarca said it wasn’t worth getting worked up over an isolated incident. But he noted that there are other countries reaching for Costa Rica’s crown in tourism.

“What this advertisement proves is that there are important, aggressive levels [of competition] in the region, something that we have warned about before,” Abarca wrote The Tico Times in an email.