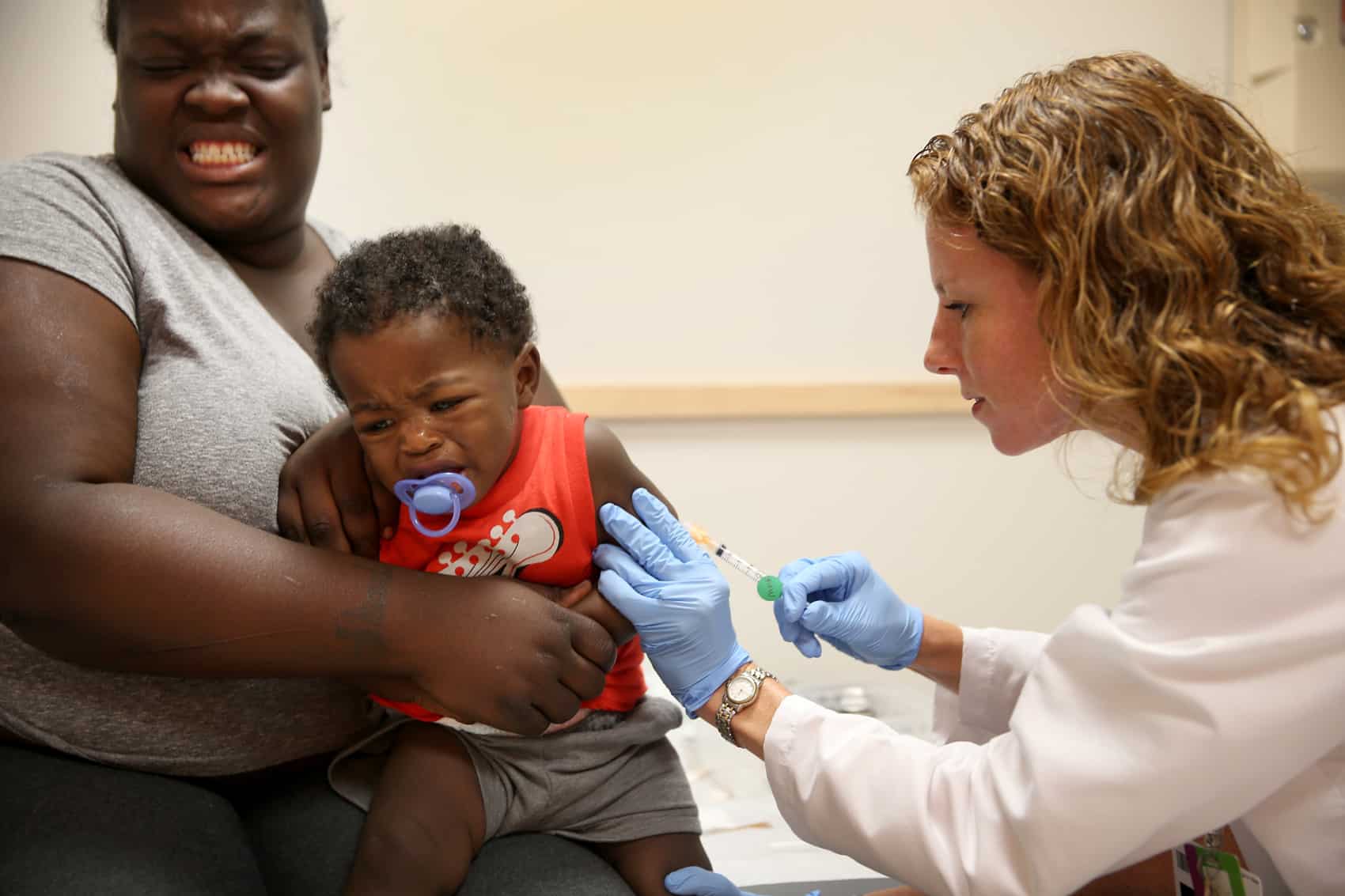 India Ampah holds her son, Keon Lockhart, 12 months old, as pediatrician Amanda Porro administers a measles vaccination during a visit to the Miami Children's Hospital on June 2, 2014 in Miami, Florida. The Centers for Disease Control and Prevention announced that in the United States they are seeing the most measles cases in 20 years as they warned clinicians, parents and others to watch for and get vaccinated against the potentially deadly virus. (Joe Raedle/Getty Images North America/AFP)

Costa Rican health officials are worried that the recent outbreaks in the United States of measles, a vaccine-preventable disease, could threaten the country’s 16-year record without the virus.

The Costa Rican Social Security System, or Caja, which oversees the country’s socialized health care system, released a warning Friday asking parents of young children to bump up their vaccination schedule before traveling to popular U.S. destinations like Disneyland. Between Jan. 1 and Feb. 6, 121 people from 17 states and Washington, D.C. were diagnosed with measles related to an outbreak at the  Disneyland amusement park in Anaheim, California, according to the U.S. Centers for Disease Control and Prevention. Last year saw 644 cases from 27 states, the greatest number of cases since measles elimination was documented in the U.S. in 2000.

The Caja recommended that children between 6 months and 14 months old traveling to the U.S. bump up their first dose of the recommended measles vaccination normally scheduled for after the infants turn 1. These children should still continue with their regularly scheduled three immunization shots after one year and three months on top of the booster. All children between 4 and 6 years old who have not received their second dose should do so before leaving the country. Children who have two of the three treatments are not at risk, according to the Caja statement.

Passengers traveling to the U.S. should present a copy of their airline ticket to doctors to receive the advanced dosis, said Dr. Raúl Sánchez. These measures are designed only for families traveling out of necessity, the Caja said, adding that their medical recommendation was not to travel to the U.S. with young children.

“We’ve made the decision to reduce the risk of brining in new cases of measles. Costa Rica has not had any cases of measles since ’99,” Dr. Isabel Fernández said in an audio statement Friday.

“This shows that we’ve seen good progress with our vaccinations and we need to strengthen it,” she added.

Costa Rica has seen increasing measles immunization coverage during the last several years, increasing from 83 percent coverage in 2010 to 91 percent in 2013, the coverage rate in the U.S. that same year, according to data from the World Bank.

Costa Rica saw one outlier case of measles in 2003 but there were no additional cases reported.

“This is going to help us minimize the risk that these children, who are the most susceptible, leave the country and return with the illness,” Fernández said.