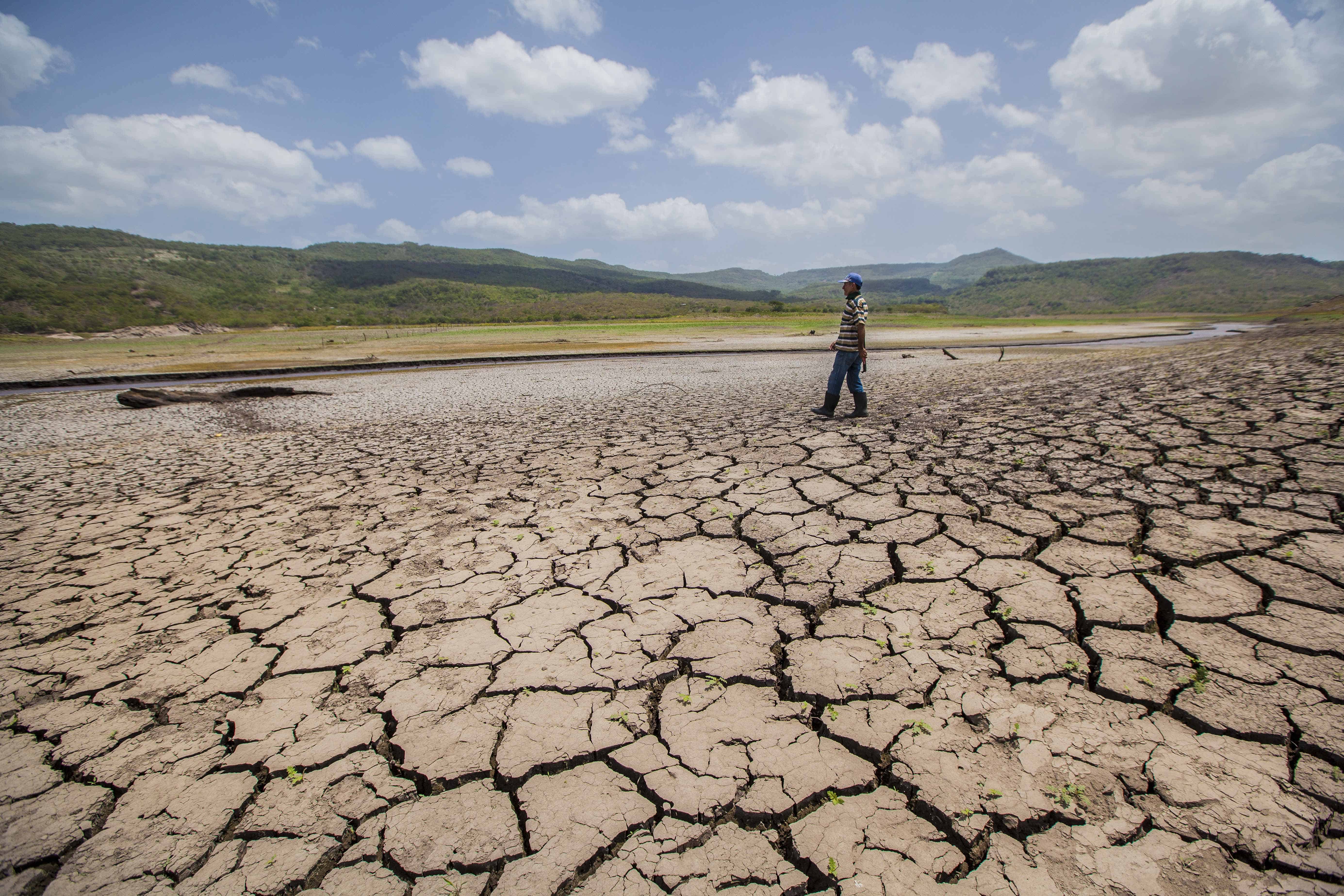 A man crosses the reservoir of Las Canoas, 60 km from Managua, on his way home on July 30, 2014. About 2,500 heads of cattle have died so far in Nicaragua due to a drought caused by the El Nino phenomenon, authorities said. (Diana Ulloa/AFP)

BOACO, Nicaragua – The last raindrop fell three months ago, forcing Carlos Román to take his cattle further and further away to find water and keep them alive in Nicaragua’s northeastern farmlands.

Nicaragua and the rest of Central America have been hit by a major drought that has killed thousands of cattle, dried up crops and forced cities to ration electricity.

Costa Rica, Honduras and Guatemala have declared emergencies in the worst affected areas to speed up aid delivery. El Salvador and Nicaragua have opened special funds to help farmers.

In northern Nicaragua, vultures are eating the carcasses of cows that are dropping dead in dried out pastures.

“It’s exhausting. I have to travel up to five kilometers,” Román said as he walked slowly along an artificial lake under a scorching sun that has reddened his face.

“Half the lake has dried up,” said the 41-year-old father of four and farmer who sells milk for a living in the Boaco province, 70 kilometers northeast of the capital.

“When the winter’s good we sow wheat and beans, but there is nothing. We eat what we can find,” he said.

Central American agriculture ministers held a videoconference on Wednesday to seek coordinated actions to cope with the drought.

The lack of rain has been blamed on the probable arrival of the El Niño weather phenomenon, which is characterized by unusually warm Pacific ocean temperatures that can trigger droughts.

It is the latest trouble to hammer a region already beset by gang violence and poverty, which have driven families and unaccompanied children to migrate illegally to the United States.

The drought has swept across a region known as “the dry corridor,” which covers nearly a third of Central America, where 10 million people live, according to a 2013 study by the U.N. Food and Agriculture Organization.

Nicaragua’s government says the country is enduring its worst drought since 1976.

The first harvest, which takes place between May and August, has yielded nothing, according to Nicaragua’s national farmers and ranchers union. Some 2,500 cattle have died and 700,000 more are in critical health as they roam dry pastures.

Honduras’ rainy season is usually from May to November, but not this year. The drought has decimated 70 percent of corn crops and 45 percent of beans, affecting 72,000 families.

The Honduran state energy company said it was rationing power for up to four hours a day in several cities because of low water levels in dams that power hydro-electric plants.

The water scarcity has even reached Colombia, where the cattle ranchers’ federation found 30,000 dead livestock.

El Niño, which occurs every two to seven years, has clobbered Central America 10 times in the past 60 years.

“What we are seeing is the consequence of El Niño,” Luis Fernando Alvarado, a researcher at Costa Rica’s National Meteorological Institute, told AFP. No water, no life

To cope with loss of crops, governments have imported U.S. and Mexican corn and beans from Ethiopia.

Román, the Boaco farmer, said he would emigrate to Costa Rica or Panama in the coming months to find work there if the rain doesn’t come.

Some 2,000 people live in the surrounding communities, where they used to have enough water to bathe, clean clothes and hydrate their animals.