How the Clintons went from ‘dead broke’ to rich

Former U.S. President William J. Clinton (1993-2001) is visiting Costa Rica today, July 1, as part of the inauguration of a new medical research and teaching facility at the Universidad Latina in San Pedro, east of San José.

WASHINGTON, D.C. – Over seven frenetic days, Bill Clinton addressed corporate executives in Switzerland and Denmark, an investors’ group in Sweden and a cluster of business and political leaders in Austria. The former president wrapped up his European trip in the triumphant Spanish Hall at Prague Castle, where he shared his thoughts on energy to a Czech business summit.

That lucrative week in May 2012 offers a glimpse into the way Clinton has leveraged his global popularity into a personal fortune. Starting just two weeks after exiting the Oval Office, Clinton has delivered hundreds of paid speeches, lifting a family that was “dead broke,” as wife Hillary Rodham Clinton phrased it earlier this month, to a point of such extraordinary wealth that it is now seen as a potential political liability if she runs for president in 2016.

Bill Clinton has been paid $104.9 million for 542 speeches around the world between January 2001, when he left the White House, and January 2013, when Hillary stepped down as secretary of state, according to a Washington Post review of the family’s federal financial disclosures.

Although slightly more than half of his appearances were in the United States, the majority of his speaking income, $56.3 million, came from foreign speeches, many of them in China, Japan, Canada and the United Kingdom, the Post review found.

The financial industry has been Clinton’s most frequent sponsor. The Post review showed that Wall Street banks and other financial services firms have hired Clinton for at least 102 appearances and paid him a total of $19.6 million.

Since leaving the State Department, Hillary Clinton has followed her husband and a roster of recent presidents and secretaries of state in this profitable line of work, addressing dozens of industry groups, banks and other organizations for pay. Records of her earnings are not publicly available, but executives familiar with the engagements said her standard fee is $200,000 and up, and that she has been in higher demand than her husband.

The speaking itineraries could be a political challenge for Hillary Clinton should she run for president, giving opponents an opening to attack the Clintons for being beholden to powerful interests. Some companies that have paid Bill Clinton for speeches have faced scrutiny from federal regulators.

Clinton’s income from speaking, unlike that of other former presidents, is detailed in annual public disclosures because his wife has held public office.

Both Clintons also give speeches for free. Bill Clinton, for instance, makes frequent visits to the Clinton School of Public Service at the University of Arkansas — appearances that Skip Rutherford, the school’s dean, called “an Arkansas fringe benefit.”

The Clintons also sometimes request that sponsors pay their fee as a donation to the Bill, Hillary and Chelsea Clinton Foundation, the family’s nonprofit group that leads global philanthropic initiatives. Hillary Clinton is doing this with her $225,000 fee for a speech this fall at the University of Nevada at Las Vegas, according to her office.

Bill Clinton has delivered his paid speeches to a diverse array of industry groups — from liquor distributors in China to coal-fired utilities in Florida to pharmaceutical executives in New Jersey — as well as to some nonprofit organizations, such as a Salvation Army chapter in Tulsa.

“He’s a stud,” said Anthony Scaramucci, founder of SkyBridge Capital, which paid Clinton $175,000 to address its annual investment conference in 2010. Clinton’s speech at the Las Vegas confab was so riveting, Scaramucci said, “there was nobody at the Bellagio cabana sunning himself when President Clinton was in the ballroom speaking.” 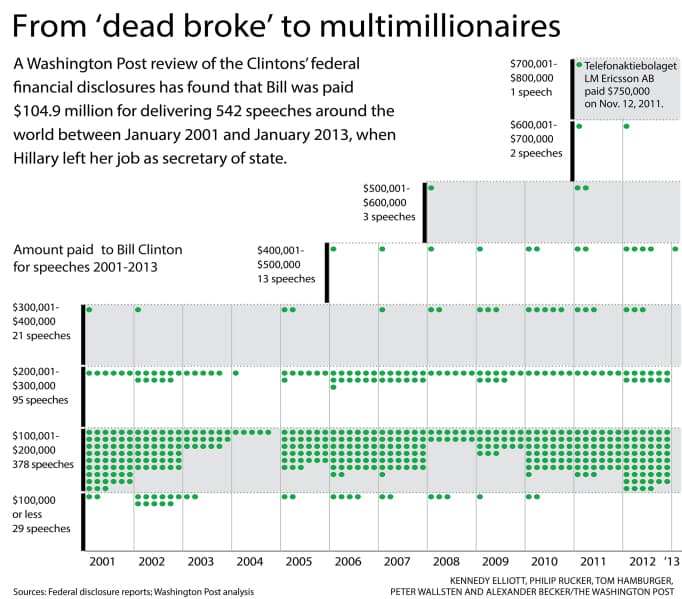 Goldman Sachs has hired Bill Clinton for eight speeches over the years totaling $1.35 million, many of them client meetings in such locales as Paris, Phoenix, and the South Carolina beach resort of Kiawah Island.

Goldman also has paid Hillary Clinton: She addressed tech entrepreneurs in Arizona last fall and women in finance in New York this year.

“President Clinton’s always interesting, but there’s a lot more demand right now for her because she just came out of government and people want to hear about that, whether it’s Iran or Russia or the big challenges she’s faced, and about the dysfunction in Washington,” said a Goldman executive who requested anonymity to discuss internal thinking.

The Post’s analysis found that TD Bank underwrote 10 of Clinton’s speeches and paid him about $1.8 million, making it his largest single sponsor in the financial industry. TD Bank is affiliated with TD Ameritrade, founded by Joe Ricketts, a prominent donor to Republican campaigns and conservative causes.

TD Bank spokesman Gabriel Weissman said he had “nothing to add” to the public disclosures. A spokesman for Ricketts declined to comment.

Paid speeches are the biggest source of income for the Clinton family, although both Bill and Hillary also have earned tens of millions of dollars writing books and through their investments.

In his addresses, Bill Clinton speaks about policy issues of the moment, domestic and foreign, and tailors his remarks to the business interests of his sponsors. He often speaks without notes and keeps his audiences in rapt attention, playfully answering questions and dispensing pearls of wisdom from his White House years or childhood in Arkansas.

“It makes me feel like I’m president again,” Clinton said in 2012 as he looked out at a large convention crowd at the National Retail Federation, which paid him $200,000.

Clinton shared advice with the retailers passed down from his mother: “When I wanted to be a musician, I was not very good for years, and she just kept beating up on me and she said, ‘You just can’t quit.’ ”

In 2011, the Silicon Valley Information Business Alliance paid Bill Clinton $200,000 to address about 400 entrepreneurs on trade issues with China and the financial crisis in Europe. Clinton spoke for about an hour, took questions and posed for pictures, said James Cai, a lawyer and president of the alliance.

The group was so pleased with Clinton’s appearance that Cai said it tried to hire Hillary Clinton in 2013 — even developing a theme, “women entrepreneurs,” that organizers hoped might attract her. Cai said she declined the invitation. He said he didn’t know her reason, but noted that the fee offered to Hillary was less than the amount paid to Bill.

Both Clintons are represented by the Harry Walker Agency. Some sponsors say the Clintons’ contracts have contained stipulations barring sponsors from recording their speeches or distributing video or text of their remarks.

“There’s not a lot of negotiating room,” said Chuck Carr, a vice president at the Institute of Scrap Recycling Industries, which hired Bill Clinton to speak in 2009 and Hillary Clinton in April. “You are offered a contract and there’s very little in the contract that you can change.”

Don Walker, the firm’s president, did not respond to requests for comment.

The engagements typically are closed to the news media, although some of Hillary Clinton’s recent appearances have been open to reporters — including her paid speech in Chicago to the United Fresh Produce Association and Food Marketing Institute on June 10, the day her new book, “Hard Choices,” was released.

Although many former presidents hit the speaking circuit in retirement, Bill Clinton’s staying power has been unusual. His busiest year on record was 2012, when he gave 72 paid speeches and earned $16.3 million, according to The Post’s review.

“I’m shocked that people still want me to come give talks,” Clinton said this week, appearing to feign modesty in an interview with NBC’s David Gregory.

In the weeks after Clinton left the White House, Walker told The Post that offers were “piling up like airplanes over LaGuardia on a foggy day.”

Clinton gave his first paid speech on Feb. 5, 2001, before Morgan Stanley Dean Witter bond traders and clients at a golf resort in Boca Raton, Fla. The firm paid Clinton $125,000, but some clients complained, fearing the controversy surrounding Clinton’s recent pardons could rub off on the firm.

The company’s chairman at the time, Philip Purcell, wrote an apology to clients for not being “more sensitive to the strong feelings of our clients over Mr. Clinton’s personal behavior as president.” Purcell declined to comment on the matter.

Controversy has surrounded a few other Clinton speeches as well.

A year later, amid inquiries from federal regulators, Rodman & Renshaw began to close its securities business and dissolved its accounts. The firm’s court-appointed bankruptcy trustee, Yann Geron, declined to comment except to say “the current state of the company is that it is being liquidated.”

In 2013, Clinton’s $500,000 fee from the Jewish National Fund to speak at a 90th birthday gala for former Israeli president Shimon Peres leaked to the press and sparked an uproar. The fee was initially going to be paid to the Clinton Foundation, but the former president rerouted it to an Israeli charity.

Other former presidents also have stirred controversy with their paid speeches. Shortly after leaving office in 1989, Ronald Reagan received $2 million for addressing business executives in Tokyo at a time when the United States had an acrimonious trade dispute with Japan. George H.W. Bush made millions of dollars speaking to corporate groups around the world, as has George W. Bush, who in 2011 addressed, among others, financial firms caught up in scandal.

Scaramucci, the hedge fund manager, said he credits Bill Clinton with helping to put his annual SALT conference on the calendar for many financiers. After Clinton’s appearance, he said, conference attendance grew by a third. And citing Clinton helped Scaramucci persuade other big-name speakers to appear in later years, including George W. Bush and former French president Nicolas Sarkozy.

“When you get the big dog, you can get the rest of the people to come after him,” said Scaramucci, a top Republican fundraiser. “President Clinton single-handedly helped to institutionalize and bolster the prestige and credibility of our event.”

Scaramucci said he tried to book Hillary Clinton for his 2014 conference last month, but she declined. “Mrs. Clinton,” he said, “is obviously in very high demand.”