Expected restrictions on industrial tuna fishing have been stalled pending the publication of a decree signed by former President Laura Chinchilla (2010-2014).

Though Chinchilla signed the decree, it does not become law until it is published in the official government newspaper, La Gaceta. Chinchilla failed to give a publishing order before she left office, and the decision over whether to enact the new regulations now falls to current President Luis Guillermo Solís, who took office on May 8.

The decree, which would ban fishing with purse seine nets — the fishing method favored by industrial tuna boats — within the first 60 miles of the Costa Rican coast, was the result of two years of negotiations with artisanal and sport fishing lobbyists and Chinchilla’s administration.

With years of negotiations already behind them, environmental groups and small-scale fishermen who supported the new regulations are calling for Solís to publish the decree immediately, but complaints from the local tuna cannery Sardimar and its parent company, Alimentos Prosalud, have given the government pause.

Barely a month into the current administration, Solís and Gustavo Meneses, the newly appointed director of the Costa Rican Fisheries Institute (INCOPESCA), have been presented a complex decree and have been asked to come up with a prompt decision.

Support and opposition for Chinchilla’s decree

Signed just days before President Chinchilla left office, the decree creates two regulated fishing zones where purse seine fishing is banned. The first zone includes the first 60 miles from Costa Rica’s Pacific shoreline, and the second is 48,822 square miles surrounding the country’s furthest island territory, Isla del Coco. The two fishing zones make up a little more than 37 percent of Costa Rica’s Exclusive Economic Zone, the first 200 nautical miles from its shore in which the country has the sole rights to exploit the ocean’s natural resources. 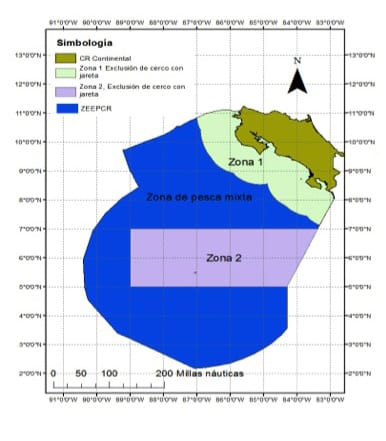 “This was a compromise,” said Mauricio González, executive director of a Pacific organization that represents the country’s artisanal fishermen. “If it was up to us, there would be no purse seine fishing in the entire EEZ.”

Members of the industrial tuna industry don’t see any compromise in the decree. Sardimar opposes any regulations on purse seine fishing, claiming that if the practice is banned they will not have enough cheap local tuna to stay in business.

“The areas they have blocked are where the most tuna is caught,” said Asdrubal Vasquez, executive director of the Costa Rican Tuna Industry Chamber (CATUN). “We are in agreement that we need to let our fisheries recuperate, but we are not in favor of doing it this way.”

Instead, Vasquez and the other members of CATUN want to implement new technology to limit the environmental impact of purse seine overfishing. When asked what technology was capable of doing that, Vasquez said he didn’t know, but “there are scientists who can figure it out.”

Industrial-sized purse seine fishing boats – all of which are foreign flagged ships – captured 90 percent of the tuna fished from the Costa Rican Pacific between 2002 and 2011, according to a 10-year study by the Costa Rican Fisheries Federation (FECOP). Often equipped with the most advanced fishing technology, the ships are able to capture entire schools of tuna in a single cast.

To accomplish these massive catches, industrial tuna boats use helicopters to fly over and identify schools of tuna. Once a school is spotted, the ship deploys small go-fast boats to circle the tuna with a net. With a net completely surrounding the school of tuna, the ship hauls the catch on board using cranes.

“We can’t compete with that kind of technology,” González said, referring to the country’s artisanal fishermen who seek high-quality tuna and other fish for restaurants. According to González, the boats in his sector might catch 20 tuna in a day and sell them for up to triple the price of canned-quality tuna. An industrial ship can bring in between 10 and 100 tons of tuna at a time with nearly all of the profits going to the foreign fishing companies.

“The country is losing the economic rewards that tuna provides by giving it away to international boats,” said Enrique Ramírez, executive director of FECOP. “Small national boats can fish sustainably, get a better price for high-quality tuna and all of that money will stay within Costa Rica instead of the profits ending up in some other country.”

Currently, purse seine boats are permitted to fish in all but the first 12 miles of the Costa Rican Pacific. González and other small-scale fishermen claim the lack of regulations on purse seiners has driven them out of Costa Rica’s EEZ.

“In order to still catch what we used to we have to go farther out, using more gas and more money,” González said. “These international ships are making out with millions of dollars, while Costa Rican fishermen are losing money.”

Though fishermen say the country loses profits to industrial fishing fleets, executives at Sardimar say it is the current system that keeps them doing business in Costa Rica. In order to encourage industrial tuna canneries to operate in the country, the Costa Rican government passed a law that renews tuna fishing licenses for free to boats that sell a month’s worth of cargo (with a 300 ton minimum) to Costa Rican canneries. The regulation allows Sardimar to purchase tuna for lower than market prices, and the cannery now commands 70 percent of the Central American canned tuna market.

“Changes to the system could cause us to lose our competitive edge in an extremely competitive industry,” Vasquéz said.  “We are worried that restricting where boats can fish will mean international boats won’t want to come to Costa Rica and we will not be able to get the raw materials we need.”

According to Vasquéz, Sardimar would consider leaving Costa Rica if the decree is published into law, eliminating nearly 1,500 jobs in the Pacific province of Puntarenas.

Vasquéz and Sardimar executives say the incentive law keeps tuna and its profits in Costa Rica through the cannery, but fishermen and environmental groups claim that industrial fleets are skirting the law.

“The ships reach their 300 ton minimum with the cannery and then sail off with the rest of the tuna to sell it at a higher price in other countries,” González said. “There is no efficient way to make sure these boats are unloading all of their cargo in Costa Rica like they are supposed to, and none of the money from the tuna that gets sold elsewhere makes it way back to Costa Rica.”

When an industrial tuna boat wraps its nets around a school of tuna, it also ensnares any other creatures swimming in the area. Valuable marlin and mahi mahi and endangered sharks are among the 1,000-some metric tons of unwanted fish caught by purse seine boats every year, according to the Inter-American Tropical Tuna Commission (IATTC). Purse seine licenses only permit the capture and sale of tuna, so this bycatch is either tossed overboard where it often dies or is sold illegally on the black market.

According to FECOP, non-selective fishing methods — which include purse seine nets and any other type of fishing that results in bycatch — have reduced Costa Rica’s fishing productivity by more than 40 percent in the last decade. But it is a non-commercialized species – dolphins – that are put at the most risk by purse seine tuna fishing.

For reasons unknown to scientists, tuna and dolphins often swim together in the Pacific Ocean, and tuna fishermen have long used easy-to-spot jumping dolphins to help point the way to schools of tuna. The IATTC reports that more than 68 percent of reported seine nets cast in Costa Rican waters are thrown over pods of dolphins. Environmental groups estimate that between 5 and 7 million dolphins have been killed by purse seine fishing since the 1950s.

Tuna fished and canned in Costa Rica carries the “dolphin safe” label, which means crews must free all dolphins from nets before tuna is pulled on board. Despite efforts to decrease dolphin bycatch, environmental groups say dolphins are still getting hurt.

“Dolphin-safe studies don’t report the post-capture stress factor,” Ramírez said. “Stress can still lead to dolphin mortality from heart attacks or muscle tears. We have reports of pregnant dolphins aborting from stress or leaving their calves to die while they try to get out of the nets faster.”

The future of the decree

In a meeting Friday morning, members of the Solís administration agreed to a two-month deadline to complete studies of the current decree. According to Meneses, the government will not come out for or against the decree until the issue is fully researched.

“You can’t be in favor of something you know nothing about,” Meneses said. “We are not going to irresponsibly approve a decree from the previous administration before we know everything about it.”

Although he has not rejected the regulations outright, Meneses has one major concern with the decree’s current form: “What I do know is that the regulatory measures needed to implement this decree are not in Incopesca’s budget.”

Meneses added: “We agree that we need to develop a fishing management strategy, but we can’t take on something completely unviable.”