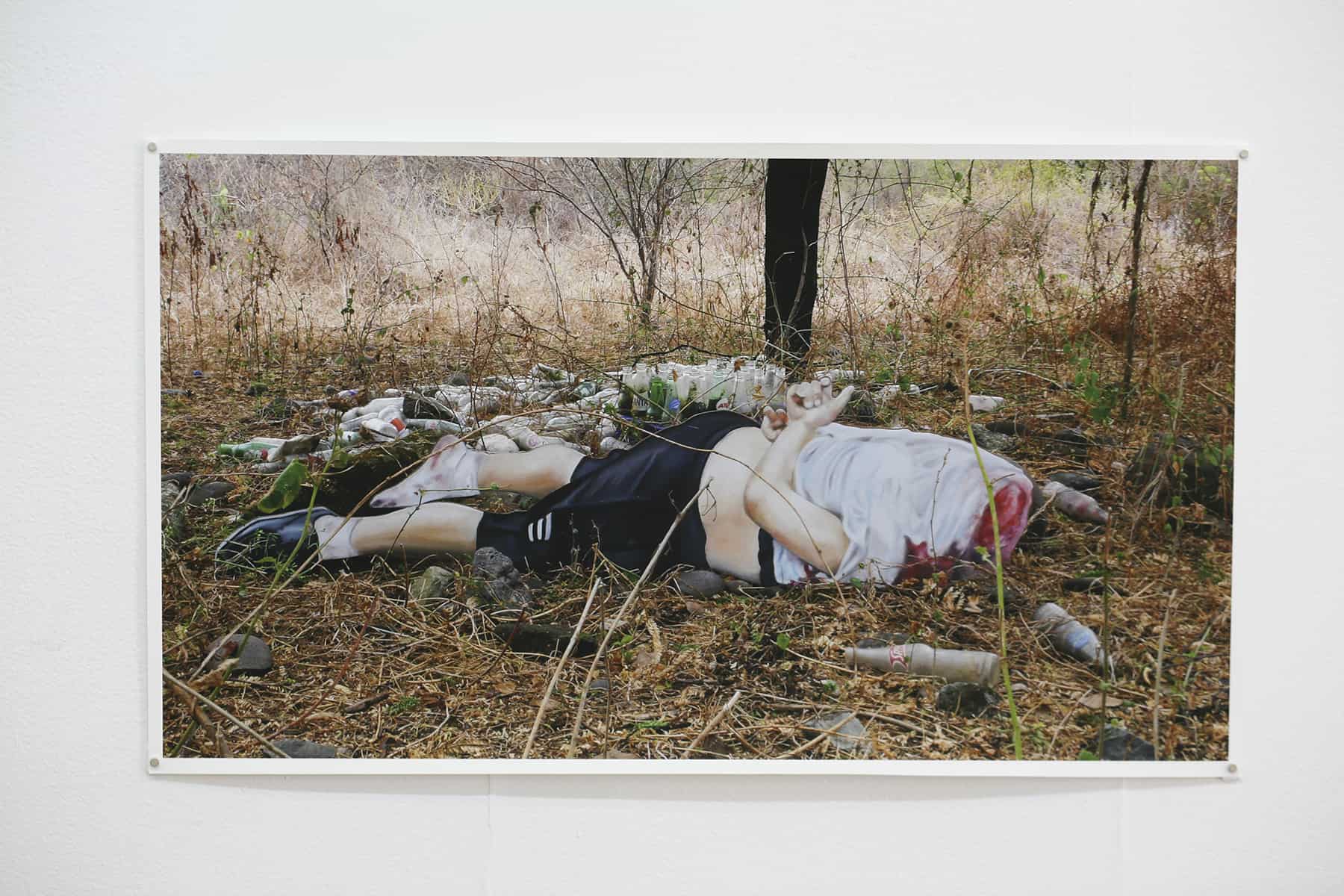 In the exhibit “Hopefully the Sun Will Save Me,” a group of filmmakers meticulously recreates a grisly mass murder. (Courtesy TEOR/éTica)

If you visit TEOR/éTica Gallery in Barrio Amón, the pictures of decapitated bodies may confuse you. At first glance, the title will not help: “Ojalá el Sol me Esconda” (“Hopefully the Sun Will Hide Me”).

To understand the exhibit, you should know its bloody background: In 2011, a group of drug dealers showed up at a farm in Petén, Guatemala, rounded up 27 farm workers and cut off their heads. The murderers represented Los Zetas, one of the most violent and powerful cartels in Central America. The tragedy was known thereafter as “la masacre de la finca Los Cocos” (“The Coconut Farm Massacre”), and graphic photographs sent shock waves of terror and grief through the region.

Inspired by the massacre and its ugly significance, Guatemalan director Julio Hernández has been shooting a narrative film for the past two years, combining the actual event with the fictional story of two punk musicians of indigenous heritage. In the film, protagonists Héctor and Andrea find a crashed airplane surrounded by cocaine packets. Like a “Breaking Bad” episode, things only spiral downward from there.

The “Ojalá” installation at TEOR/éTica isn’t a “making of” exhibit, but rather an opaque series of references to the massacre, the film and the way that art imitates life. Artists Andrea Mármol and Alberto Rodríguez Collía were given the task of designing the set. Put bluntly, this meant deciding where to position a crashed airplane, and where to scatter the headless corpses.

Not surprisingly, the “Ojalá” film is a low-budget production, so Mármol and Rodríguez had to replicate these scenes of destruction on the cheap. Instead of using mannequins or a retired Cessna, they decided to cut pieces of wood and paint them realistically, just like a stage flat. The airplane is actually just a piece of scenery, but because the mural is so detailed, it looks like an actual aircraft. The same goes for the bodies.

Instead of displaying these paintings, the artists show sketches, photographs and video clips of the film crew at work. In the corner of the one-room exhibit stands a bivouac, which is shaped out of blue tarp. Cardboard weapons lie on its floor, each one a two-dimensional replica of an Uzis or Bowie knife. The showing behaves like both a diorama and scrapbook, sans explanation. Until you read the bilingual brochure (available in the corridor), you may feel totally perplexed.

Still, the exhibit is provocative, and if you have 20 minutes to spare in Barrio Amón, and you also have the patience to puzzle out what you’re seeing, “Ojalá” is a worthwhile postmodern experiment. Like similar postmodern experiments – “Man Bites Dog” and “This is Not a Film” comes to mind – “Ojalá” approaches a morbid topic from a unique angle. Yes, we all know that cartel violence is despicable. But what happens when you try to replicate that violence on a piece of particleboard? Do you become dispassionate, a mere technician and aesthete doing your job, or are you walking a mile in murderers’ shoes?

The main billing at TEOR/éTica Gallery is “Retrato Familiar en Helvética” (“Family Portrait in Helvetica”), Costa Rican artist Mimian Hsu’s homage to family history and typefaces. If you pass the gallery’s entrance, you will see its front wall covered in a giant Chinese character, as well as smaller Romanized letters and numbers. TEOR/éTica routinely covers its façade in eye-catching murals, like advertisements that also function as public art. Whether they know it or not, most people are acquainted with Helvetica, that ubiquitous font. We have all seen Helvetica on the signs of Urban Outfitters stores, or on hip book covers, or in the New York City subway system. True nerds have seen the documentary “Helvetica,” and we know its enormous social significance. But few Westerners have ever seen Chinese Helvetica, or even imagined that a Chinese Helvetica existed. Like all of TEOR/éTica’s public murals, Hsu’s black-and-white ideogram promises challenging artwork within. Outside of Barrio Chino, you don’t see much Mandarin in San José. A passerby can’t help but wonder what else Hsu has to show.

As it happens, Hsu’s “Helvetica” doesn’t contain much. We see a slide show of a Chinese cemetery in Limón Province, plus an old letter and a silk bed sheet (a traditional wedding gift), but none of these artifacts congeal thematically. I imagine a visit to the Hsus’ family attic would have a stronger emotional impact. The gallery’s brochure explains: “The works in the exhibition room belong to the artist’s body of work that explores historical interstices related to the flow of Chinese immigration to Costa Rica.”

Historical interstices are great and everything, but it is clear that Hsu is working on something much greater. For the moment, her Helvetica façade deserves attention on the street, and it may beckon a future masterpiece. Until then, the family portrait isn’t quite complete.