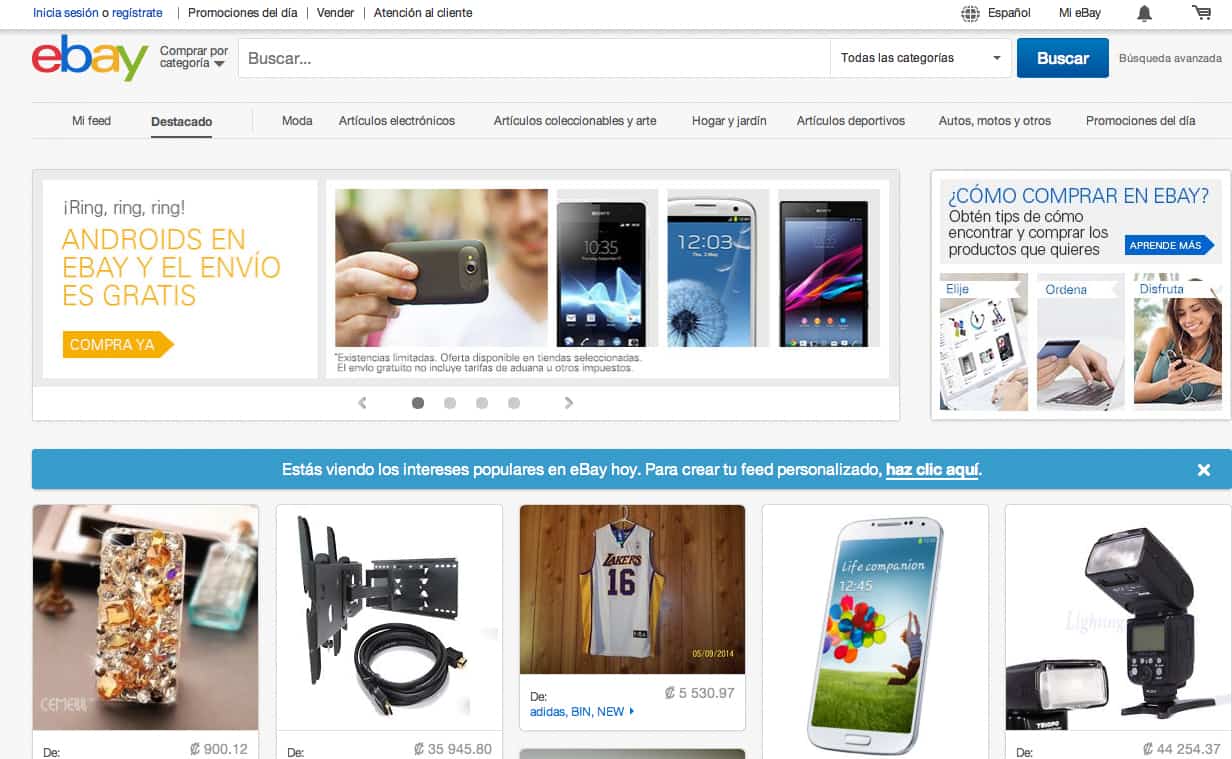 EBay is rolling out websites tailored for shoppers in Latin American countries, seeking to accelerate sales at its online marketplace in the fast-growing region.

The company is starting sites in Spanish and Portuguese that will incorporate local currencies and e-commerce services for individual countries, said Wendy Jones, eBay’s vice president of global expansion and cross-border trade. The services are aimed at boosting sales in 19 countries, including Brazil, Mexico, Colombia, Argentina and Chile.

EBay is broadening its efforts in Latin America as part of a multiyear expansion in developing markets, which has included a similar push into Russia in recent years. Revenue from the company’s traditional business, including fixed-price item sales and auctions, has begun slowing, expanding by 10 percent in the first quarter compared with a 12 percent gain last year.

“Growth in e-commerce is moving South and East — and has been for a couple of years,” Devin Wenig, president of the global marketplaces business, said in an interview. “We have huge markets in the U.S. and Western Europe, but they are big and they are more mature, and markets like Brazil and Russia that are at earlier stages of development, but are growing rapidly.”

Latin American countries are projected to be among the fastest-growing business-to-consumer e-commerce markets in the world, according to EMarketer. Sales in Brazil, Mexico and Argentina are all estimated to rise by 19 percent or more this year.

Even without the localization efforts, the company has been adding customers in the region, including more than 1 million new Latin American consumers who shopped on eBay in English with U.S. dollars last year, Jones said.

“It’s a big step forward for us,” she said. “We have very significant aspirations.”

Last year, the San Jose, California-based company started a fashion-focused mobile application in Brazil for Portuguese speakers. EBay also has worked with its PayPal payments unit, which already has a strong presence in Latin America, to improve its analysis of what shoppers there want.

“They’ve helped us with a lot of local-market understanding,” Jones said.

As part of the efforts being introduced Thursday, eBay is rolling out a mobile app in Portuguese for its overall marketplace business. It already has a smartphone app for Spanish speakers. The company also will be updating its service for mobile Web browsers, for shoppers who haven’t downloaded the apps, Jones said.

With the new tailored sites, shoppers in Brazil may see a different list of highlighted products than consumers in Mexico. For example, a particular brand of electronics or clothing may get more prominent play in one of those countries, she said. The move puts eBay in more direct competition with MercadoLibre, a Latin American e-commerce company in which eBay holds a stake.

EBay also recently expanded its global shipping program to Brazil, making the process simpler when shoppers buy products from a U.S. merchant. The program, also available in Mexico and more than 50 countries around the world, means a consumer will see the “all-in” price of an item, including taxes and duties.