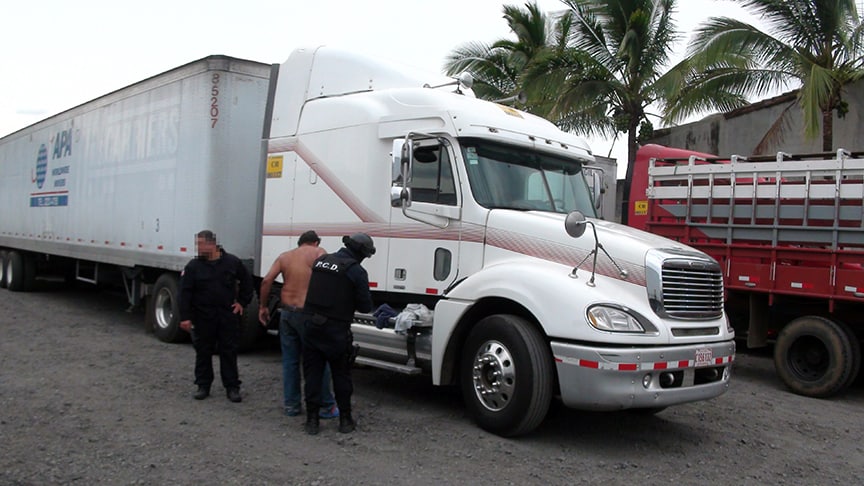 Police broke up a regional drug trafficking ring after arresting eight suspects in a series of raids across Costa Rica on Wednesday morning.

The scene wouldn’t look strange to fans of the television show “Breaking Bad.” The alleged traffickers hid the drugs inside sealed buckets of pineapple juice driven in refrigerated trucks from Costa Rica to the Mexican state of Sinaloa. The United States is believed to be the final destination for the narcotics.

Vice Minister of Public Security Celso Gamboa said that authorities seized over a metric ton of cocaine in several trucks during the year-long investigation.

Police did not seize any drugs Wednesday during the raids.

The alleged drug traffickers used a Costa Rica-based international trucking company, Teja Transportes Internacional, to secret cocaine from Panama into Mexico. Chavarría said that the network relied on the structure of exporting fruit juice to transport and launder profits.

The top prosecutor said that the traffickers knew that Drug Control Police (PCD) would be wary to rifle through sharp scrap metal or open perishable exports, like pineapple, which would require paying reparations for contaminating the product if no drugs were found. Intelligence gathered by the DIS, Costa Rica’s intelligence agency, and PCD was key to knowing which vehicles to search, added Chavarría.

Salvadoran authorities arrested two other Costa Ricans connected to the trucking company with 468 kilograms of cocaine in July 2013. Public Security Minister Mario Zamora said that the Ticos arrested there would be tried in El Salvador.

The three Mexican owners of the trucking company fled Costa Rica after the July 2013 arrests.

Zamora said that the criminal organization was linked to the seizure of over a ton of cocaine discovered among scrap metal in a truck leaving Costa Rica at the Peñas Blancas border crossing in January.  The minister said that the seizure was one of the first police actions that contributed to Wednesday’s arrests.