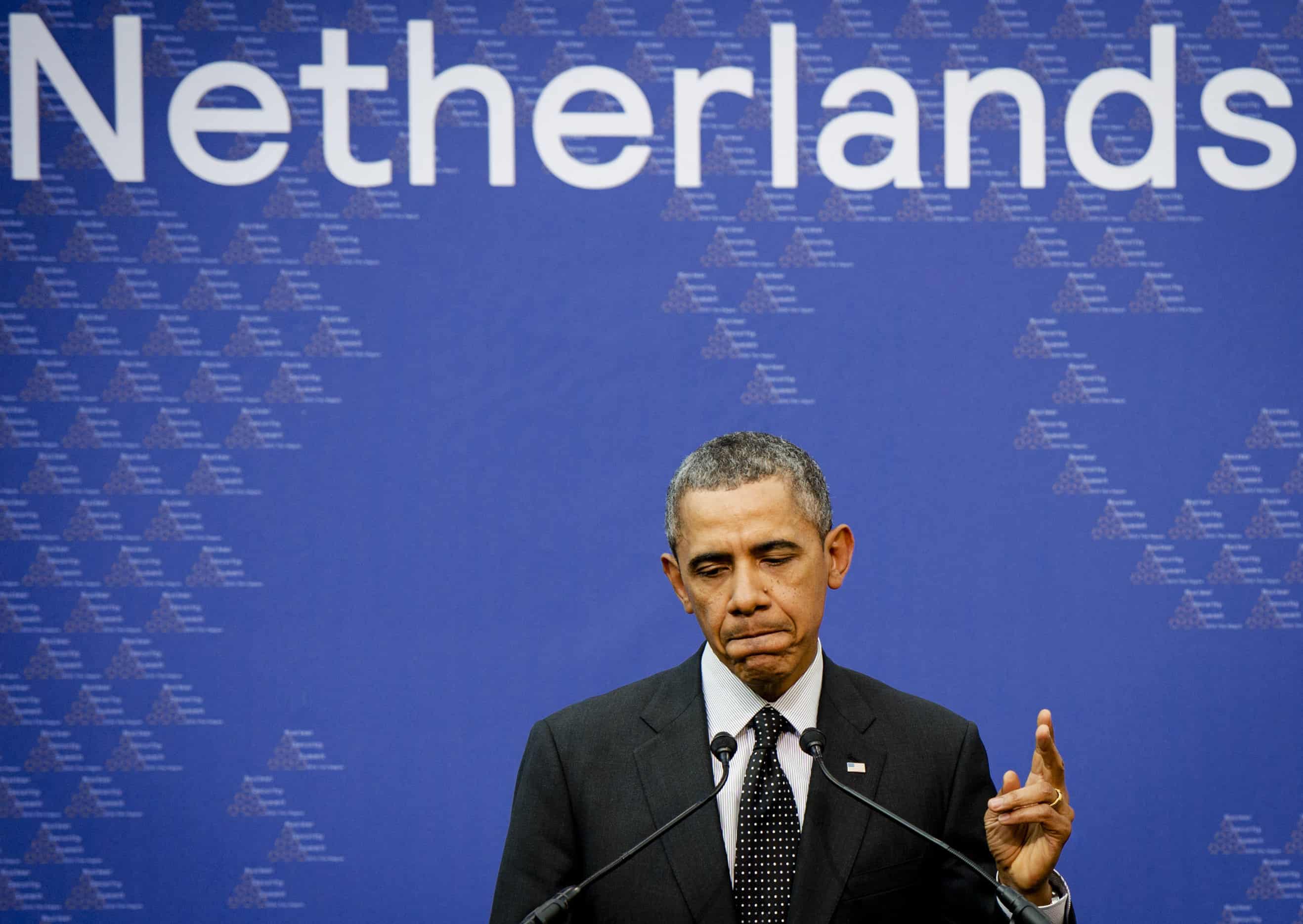 U.S. President Barack Obama gestures during a press conference at the Gemeentemuseum in The Hague on March 25, 2014 at the end of the Nuclear Security Summit. Thirty-five countries committed to bolstering nuclear security, backing a global drive spearheaded by Obama to prevent dangerous materials falling into the hands of terrorists. (AFP/ANP/Robin Van Lonkhuijsen)

THE HAGUE, Netherlands — U.S. President Barack Obama urged Russia to de-escalate the crisis over Ukraine or face the consequences of more sanctions if it encroaches further into the east of the country after its annexation of Crimea.

President Vladimir Putin “has to understand that there’s a choice to be made here,” Obama told a news conference after a 53-nation nuclear-security summit in The Hague Tuesday, saying there’s “another path open” to the Russian leader. “It is now up to Russia to act responsibly and show itself once again willing to abide by international rules and international norms.”

Obama spoke a day after he and his fellow Group of Seven leaders said they won’t attend a planned Group of Eight summit in the Russian Black Sea resort of Sochi, the venue for the Winter Olympics, and will instead hold their own meeting in June in Brussels.

Russia has consolidated control over Crimea and is maintaining forces along the border with Ukraine, in what Obama said “appears to be an effort of intimidation,” in the most serious confrontation with the United States and its allies since the Soviet Union collapsed. The International Monetary Fund is set to make an announcement Wednesday after talks about a bailout loan for Ukraine, Finance Minister Oleksandr Shlapak said.

The ruble has weakened 7.9 percent in 2014, making it the second-worst performer against the dollar among 24 developing-market currencies tracked by Bloomberg. It gained 1.2 percent to 35.6739 per dollar Tuesday.

Russia’s Finance Ministry canceled its fourth ruble-bond auction in a row, scheduled for Wednesday, citing “unfavorable market conditions” in a statement on its website.

Investors pulled $5.5 billion from Russian equities and bonds this year through March 20, already approaching the total outflow of $6.1 billion for all of 2013, according to data compiled by EPFR Global, a Cambridge, Mass.-based company that tracks fund flows.

Obama told reporters it would be “dishonest to suggest” that there’s a simple solution to the Crimea crisis. “I don’t think it’s a done deal and I think Russia is still making a series of calculations” on how to proceed, he said.

An IMF team was completing talks in Kiev on a loan that Shlapak told reporters would amount to between $15 billion and $20 billion. Ukraine’s economy will contract 3 percent this year, the minister said.

The G-7 remains ready to intensify actions, including coordinated sanctions that would have “an increasingly significant impact” on Russia’s economy if the authorities in Moscow escalate the situation, the group said in a statement Monday. The move meant the group — the U.S., Germany, Britain, France, Italy, Canada and Japan — reverted to its Cold War-era format, suspending what became the G-8 in 1998 when Russia was welcomed in.

“While a Russian invasion of eastern Ukraine can by no means be excluded, Putin must surely calculate that it would be a poor and risky option,” Roderic Lyne, deputy chairman of Chatham House in London and a former British ambassador in Moscow, said in a comment on the research group’s website. “He also knows that it would trigger much deeper Western sanctions, which would hit his Achilles heel — Russia’s declining, unreformed economy.”

U.S. and European warnings focused on potential military moves by the Kremlin into Russian-speaking areas of eastern and southern Ukraine, leaving open whether the two hope to dislodge Putin’s forces from Crimea, a Black Sea peninsula dominated by Russia since the 18th century.

The U.S. has imposed asset freezes and visa bans on 31 Russians, Ukrainians and Crimeans, including political and business figures close to Putin. The 28-nation EU has put 51 people on its blacklist, including some on the U.S. roster, while stopping short of punishing businesspeople.

Further Russian action might trigger wider sanctions that could cover Russia’s energy and finance industries, as well as weapons procurement, Obama said, even though they might “cause some disruptions to each of our economies.”

European governments are debating the costs of snubbing Russia. Banking curbs would hurt Britain, an arms embargo would bar France from selling Mistral-class helicopter carriers to the Kremlin, and cutbacks in purchases of Russian gas would harm a swathe of EU countries, starting with Germany.

“Russia is a regional power that is threatening some of its neighbors,” Obama said. “Not out of strength but out of weakness.”