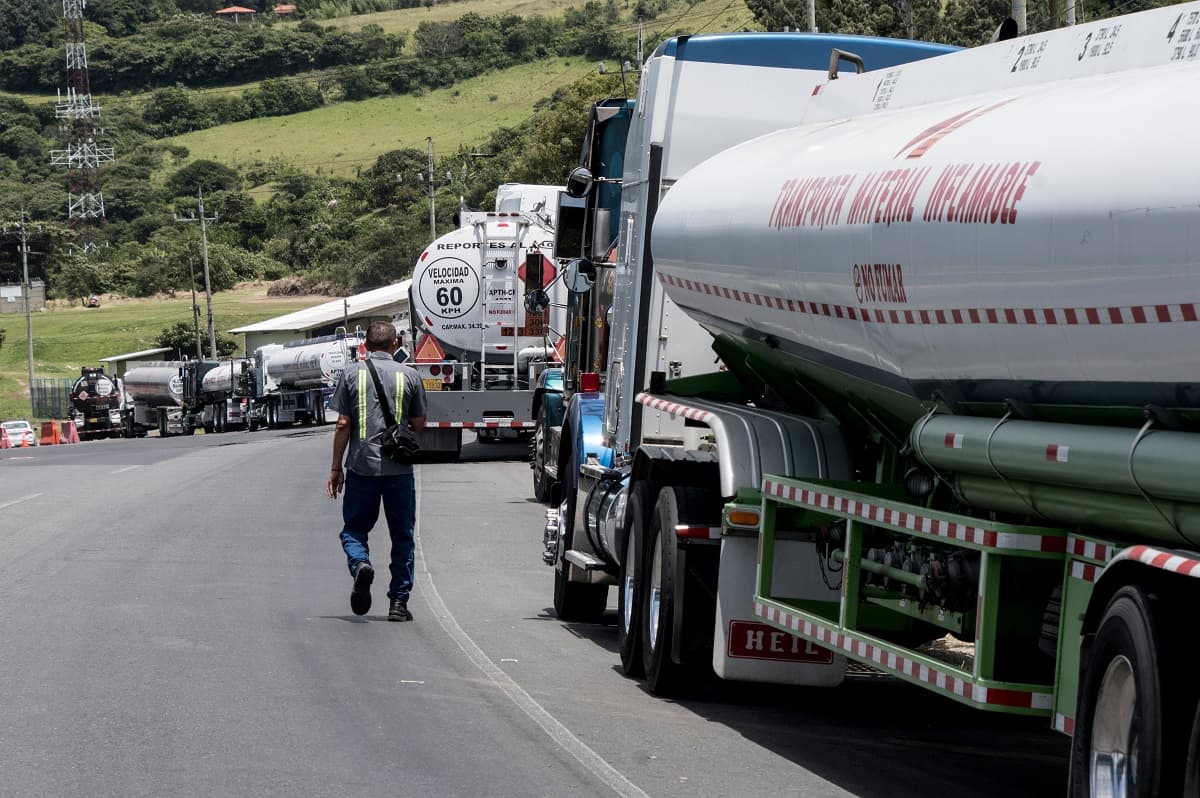 Fuel trucks queue outside a refinery to fill their tankers in Cartago, Costa Rica, on Sept. 19, 2018 during an indefinite strike called by the country's unions against a tax reform. The unions of the Costa Rican public sector began an indefinite strike on Sept. 10 in opposition to a tax reform project which would mean an increase of taxes to face the bulky fiscal deficit. Due to the strike, gasoline is scarce in many gas stations across the country. (AFP Photo / Ezequiel Becerra)

The strike that has been gripping Costa Rica since Sept. 10 has begun taking its toll on one of the nation’s biggest industries: tourism.

Several small business owners throughout Costa Rica are struggling through a September with less income than usual, even for an off-peak tourism month. They say the protests — which have blocked major highways — have caused an uptick in cancelations, threatening narrow profit margins.

Javier Pacheco, vice president of Costa Rica’s National Chamber of Tourism (Canatur) told the daily La Nación travel agencies have suffered a 50 percent drop in reservations due to the strikes.

Those disruptions are raising alarm from business owners who have seen revenue streams dwindle.

“What are you going to tell the tourist: That they should come back in 15 days, when there isn’t a strike?” said Marlon Calderón Brenes, owner of Bijagua Rainforest Tours near Tenorio Volcano National Park in northern Costa Rica.

Calderón Brenes says both of his scheduled tours last week canceled, affecting not only his company but the families that prepare food for visitors and own the boats he uses.

“If you don’t know if it will take three-and-a-half hours or twelve hours to drive here, you’re not going to come,” said its owner, Leda Arguello Cruz.

Rafaél Sanchez, manager of Bahía Aventuras in Uvita, on the southern Pacific coast, is thankful to have received just six cancelations since the strikes began. But he knows he has been fortunate.

During the annual Whale and Dolphin festival, held earlier this month, Sanchez and other residents in Uvita noticed significantly smaller crowds than they expected. Rigoberto Vargas Navarro, president of the Association of Tour Operators at the Marina Ballena National Park, told The Tico Times he estimates around 1,500 fewer people came to this year’s festival compared to in 2017.

“We think that’s a result of the strikes,” Vargas Navarro said. “That affects us a lot.”

Costa Rica’s international airports have remained fully operational, but protesters have obstructed highways in Puntarenas, Guanacaste, and Limón. Earlier this week, Celebrity Cruises, whose ocean liner Infinity had a scheduled stop in Puntarenas, announced the ship would skip the call due to the strikes.

Fifty kilometers south of Uvita, in Sierpe, one prominent business owner estimates that at minimum, 15 percent fewer people have visited the area this year. Jorge Uribe, who manages La Perla del Sur, says several people who have contacted him in recent weeks have chosen not to make reservations with the company after learning of local roadblocks.

“It’s worrisome for the entire region,” he said.

Thousands of citizens have been marching in San José and across Costa Rica this month against a proposed tax reform, which they say would have an unfair impact on the working class. Those demonstrations have generally remained peaceful, but they have routinely blocked major highways across the country. Others have impeded access to Costa Rican Petroleum Refinery (Recope) sites, causing occasional fuel shortages.

According to the Costa Rican Institute of Tourism (ICT), the industry comprises 6.7 percent of the nation’s Gross Domestic Product. In a statement this week, María Amalia Revelo, the Minister of Tourism, acknowledged the impact strikes have had on local tourism.

“I call on the protesters to exercise sanity and calm,” Amalia Revelo said in the statement. “The defense of the rights of some cannot cause the abuse of the rights of the rest of the population, affecting public services and the free movement of citizens and tourists who chose Costa Rica, out of dozens of options, as the destination to enjoy their holidays.”

Unions and the government have started talks to end the strike, but the indefinite end has caused mounting concern for business owners.

The U.S. Embassy on Tuesday published an alert informing potential tourists that demonstrators might create traffic jams, disrupt local commerce, or interrupt government services. The alert recommends monitoring local media for updates and exercising caution if in the vicinity of a demonstration.

In a statement to The Tico Times, Information Officer Hakim Hasan said the alert is a routine process, not meant to raise alarm but to help tourists prepare for their travel.

“We have complete confidence in our Costa Rican colleagues’ ability to manage the situation,” he said. “We obviously want tourists who are visiting Costa Rica — or anywhere in the world — to understand some of the challenges that might exist in an environment like this, when there’s a strike.”

But many Costa Ricans fear damage has already been done to the country’s international reputation as a tourist destination.

“Imagine being in another country and hearing there’s a strike,” Calderón Brenes said. “Do you think they’re going to return to their country and recommend Costa Rica?”