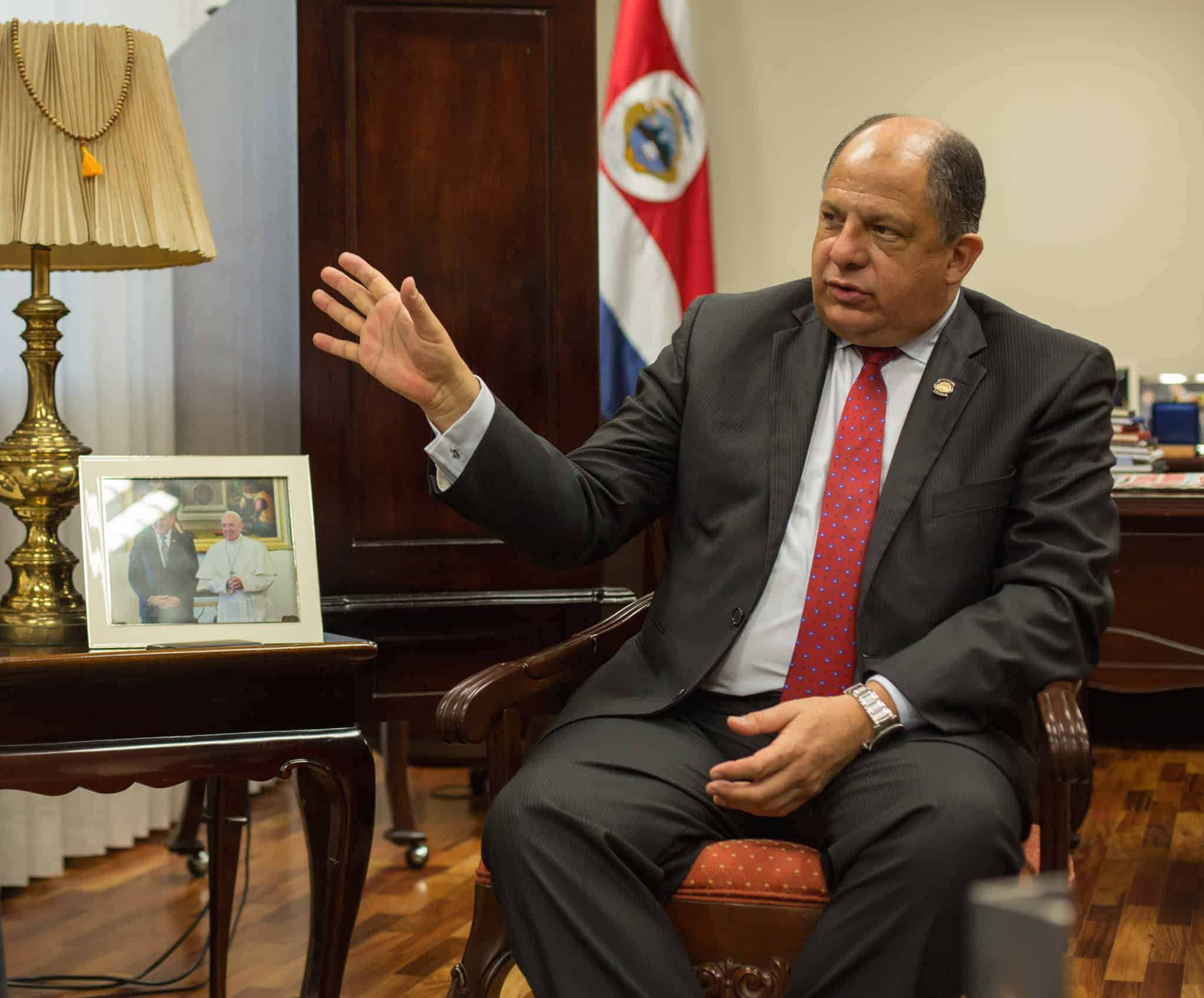 In an interview with The Tico Times, Luís Guillermo Solís spoke in-depth about immigration policy in the region, including U.S. President-elect Donald Trump's plan to build a wall on the southern border. (Courtesy of Roberto Carlos Sánchez/Casa Presidencial)

On the very front of Luís Guillermo Solís’ desk in his Casa Presidencial office, there’s a small but telling ode to U.S. politics. Perched on the desk is a replica of former U.S. President Harry Truman’s famous “The Buck Stops Here” sign, which Truman often said served as a reminder that he had the final say on the country’s most important issues.

Solís, who has been confronted with perhaps the most serious immigration crisis in Costa Rican history during his presidency, said he draws similar assurance from the sign on a wooden frame he bought in Key West, Florida.

A former history and political science professor who is well-versed in the intricate migratory patterns that have shaped the influences of his own country, Solís is also adept in his understanding of the region’s broader immigration history. Recently facing heavy waves of Cuban and Haitian migrants, Solís and Costa Rica have been at the front lines of a consequential dilemma: while migratory flows continue and the region seemingly becomes more divided over immigration, the polemic issue is sure to continue, with “the buck” continually stopping at Solís’ doorstep.

Solís sat down with The Tico Times recently to discuss some of the successes and failures of migratory policies in Costa Rican and the region as a whole, as well as Costa Rican attitudes toward migrants and U.S. President-elect Donald Trump’s oft-publicized comments about building a wall on the southern border with Mexico. Excerpts follow.

The United States is at a point politically where it’s talking about building walls and initiating mass deportations under the Trump administration. What kind of effect would such policies have on a country such as Costa Rica that’s at the front lines of these immigration waves?

The president-elect has himself talked of a wall. Clearly, migration has been seen as a threat by the United States in the past, and other walls have been built. There is a very strict policy of not allowing so-called “illegal aliens” to get into the United States.

The truth of the matter is that the United States is also a nation of migrants. This was a fundamental idea in the American psyche and in the American concept of itself. The United States was proud of its immigrants, so much so that the Statue of Liberty became the symbol of the country, which was placed at the point where most of the migrants arrived… migrants have in fact come to the United States regardless of what the policy has been. Ultimately, if you want to get through a border, you will be able to do it sooner or later. It’s difficult to assure that you’re going to have an absolutely invulnerable border. It just doesn’t work that way.

You mentioned that the policy is still up in the air, but of course, the dialogue alone taking place in the United States has had some effect. You’ve commented in the past that you’d like to see more solidarity out of Central America when it comes to migratory issues. How can Central American countries get on the same page, especially with the U.S. saying it wants to build a wall?

That’s a very good question. We have not been able to do that because it’s very difficult to forge our regional policy. In the case of the current trend of migrants, that [conversation] must include – not should include, but must include – Colombia, Ecuador, Brazil, and other countries that are not members of the Central American Integration System (SICA). It’s a big challenge. How do you do that? Well, through political dialogue, through common policies, through legislation that may be required to have a standard in the region.

So far, we’ve been pretty much surpassed by the phenomenon and it doesn’t look pretty. It’s also true that these flows are rather new. The [migratory flows] from the past do not resemble the present. Secondly, the dynamic of the flows varies. We have seen a severe reduction in incoming migrants from Panama, and Panama has experienced a very significant reduction of incoming migrants from Colombia. We are trying to find out why this is happening. Those patterns are new. What’s not new for Costa Rica is seeing thousands of Cubans. During Rodrigo Carazo’s presidency (1978-1982), thousands of migrants were flown in from Cuba to Costa Rica and granted visas, and you’ve also set up tent camps and flown migrants out. Do you think that Costa Rica has an obligation to be a bastion of peace for migrants?

I hope so. We have to remain humanitarian. We have to recommit ourselves again and again to the principles and values we cherish in terms of the defense of human rights. We do have to be very careful not to confuse migrants with refugees or with asylum seekers, and to differentiate historical flows. During President Carazo’s administration, most of the region was ruled by military governments; that’s not the case anymore. The laws ensuring certain humanitarian conditions for migrants did not exist then; they exist now. Most of the migrants we’ve seen come into Costa Rica in the last year didn’t want to stay here; they just want to pass through. So the kinds of policies that we have to enact to protect them from  harm are shor- term measures because they are not going to stay in the country for a long time.

We have an obligation under international law to protect children… including ensuring each child is traveling with his or her parents. The only way to ensure this, in the absence of documents proving the identity of parents, is to do genetic tests. That takes months, because we don’t have the labs [in Costa Rica]. We have to send the tests somewhere else… The law doesn’t allow us to keep them imprisoned, and you cannot put children in jail at any rate. So it’s very complicated. They don’t stay here and they don’t want to be here… but the way in which we treat them has to be humanitarian.

When you were speaking in Washington, D.C. you said, “Not all expensive democracies are good, but all good democracies are expensive.” Costa Ricans see footage of shelters being sent up and planes being brought in for people from other countries. Do you think you’ve done a good job of convincing Costa Ricans that this was the right thing to do?

I think that most people believe so. Some people say, “Why are you giving them food? Why are you giving them shelter? What about our own poor people?” There is always some criticism. But by and large, people have not only supported our policies, but have felt proud of the fact that the migrants feel very happy here.

I visited, without any preparation, the camp near the border of Nicaragua at La Cruz [when I was in the area] to view the impact of Hurricane Otto. We just decided on a whim to go into the camp. I couldn’t believe it. It was just like a big party. The welcome they gave me was amazing. They [handed] me their children and took photos. They were extraordinarily happy, and it’s not like that was a five-star hotel. This is a tent camp, but they were very grateful. Even people in La Cruz, which is a very poor community, waited and were patient. They didn’t like it, necessarily, but they knew that they had to endure it and they did so with generosity.

On the other hand, you have reactions in San José vis-à-vis the Nicaraguan community with the national anthem issue, which I thought was horrendous. Appalling. I was truly disappointed when I saw the kinds of things that were said against Nicaraguans. Unacceptable. But with migrants, I think the national community was very gracious and tolerant.

It goes back to Costa Rica’s history as a refuge of peace for the region.

Absolutely. I must say that the Cuban bridge was flawless. Once it was finally designed, it worked like a Swiss clock. It was just amazing. The way in which we were able to overcome the Central American reluctance to allow them passage through their own territories was extraordinary. I [was brought to] tears when I saw the kinds of expressions of gratitude of the Cubans. [The day following this interview, which took place on Jan. 11, the administration of President Barack Obama announced it would end the so-called ‘wet foot, dry foot’ policy that allowed Cubans who reached the U.S. to apply for residency after one year, which had motivated many of the Cuban migrants that passed through Costa Rican in recent years.]

It was a big operation, and it was not easy. We had no experience with these kinds of flows. Never before had we had a flow of migrants like the ones we had here. We had them in the 1980s but it was a different concept. There was a war. They were refugees. And they came by the thousands, but we never had 8,000 people here from Nicaragua. We had 2,000 in refugee camps then.

This experience was fundamental, and I think we have to prepare for this in the future. One of the things I undertook as a responsibility of this administration was to prepare the country as much as we can to ensure the new administration, when it’s elected, finds what I did not find: The legal framework that would allow us to do these things legally. For example, to finance some of these operations in a different way than we did the last time. We did what we did because the Comptroller’s Office was very understanding of the problem, but technically, some institutions could have been in conflict with the specific law that generates resources.

Stay tuned on Monday, Jan. 16 for our special feature on the history of immigration in Costa Rica.