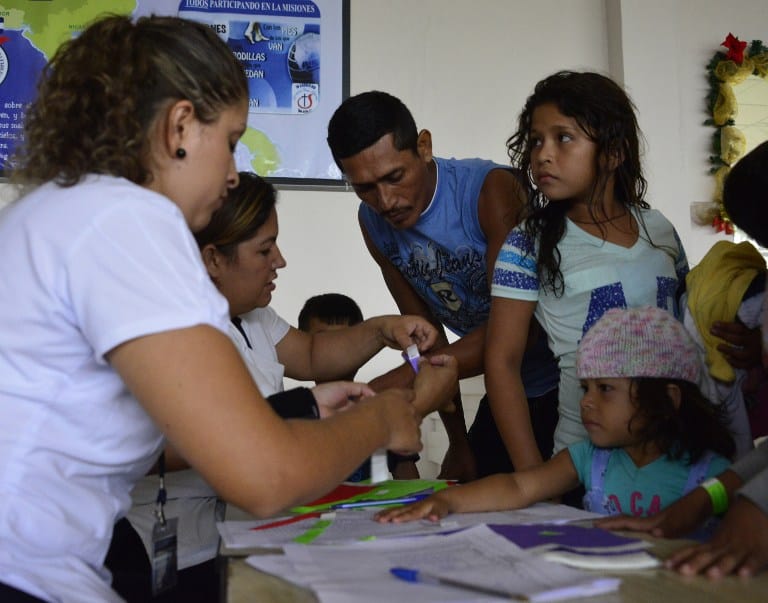 Evacuated people register themselves at the Hostel of the Church Upper Room, in Guapiles, Costa Rica, some 100 km from Limon, on November 23, 2016. (Ezequiel Becerra/AFP )

Hurricane Otto left Costa Rica Friday with significant damage, particularly in parts of the Northern Zone, where 10 deaths and a number of disappearances have been reported as of this writing on Sunday afternoon.

The significant damage from flooding and high winds in towns such as Upala, Bijagua Bagaces near the Nicaraguan border will require millions of dollars in repairs to rebuild roadways and homes, authorities have said.

Here are some of the ways you can donate in person, through a bank transfer or online to help those affected by Otto. (Readers: How else are you helping out? Tell us!)

One of the hardest hit areas was Bijagua, the pueblo in Alajuela province located just northwest of Volcano Tenorio and Arenal Lake. As of Sunday morning, the fundraiser had already attracted more than $15,000 in donations. According to the GoFundMe page, the donations will go directly to the community members in Bijagua, many of whom lost everything in the storm, and will be distributed by the Bijagua Development Association.

People seeking to donate to relief efforts online – including U.S. citizens seeking to make a U.S. tax-deductible donation – can do so through the Costa Rica USA Foundation for Cooperation (CRUSA), which announced today a $11,000 donation to relief efforts in key areas of the country and invites others to match this amount. Donations made on Amigos of Costa Rica’s Hurricane Otto page will be transferred in their entirety to the Red Cross in Costa Rica. Visit the special donation page here to contribute.

Red Cross donations via bank wire or in person

The organization is still accepting donations at its designated San José location near Parque de la Paz. It is also taking in bank wires for monetary donations. None of those donations will be subject to commissions, according to Red Cross spokesman Gérald Jiménez. To make a deposit to the Red Cross through Banco Nacional or Banco de Costa Rica, use the routing numbers included below:

The retail giant announced that it will be suspending Black Friday festivities in Costa Rica until next weekend because of the hurricane. Stores will remain open, however, and customers can drop off donations at boxes near the entrances. As with most other donation collectors, applicable items are non-perishable foods, personal hygiene supplies, and bottled water, among other items. All donations will then be given over to the Red Cross to reach those directly affected.

Other stores with locations throughout the country accepting donations are: Automercado (and Vindl); Fischel pharmacies; Gollo; Universal; Librería Internacional; and Ruta Urbana.

Costa Rica’s largest public university is beginning a week-long collection Friday to help hurricane victims. The main San Pedro location will have various drop-offs throughout its campus where those interested can take standard donation items.

The nonprofit organization’s fundraising campaign has raised more than ₡4 million ($7,200) in donations as of this writing. With three days left, the group still needs more than double that amount to reach their desired goal of ₡10 million, all of which will go to those hit by the hurricane.

The country’s telecommunication company is allowing users to text in donations. Follow the instructions below by texting “Dono” to the various numbers to donate the corresponding amount in colones.