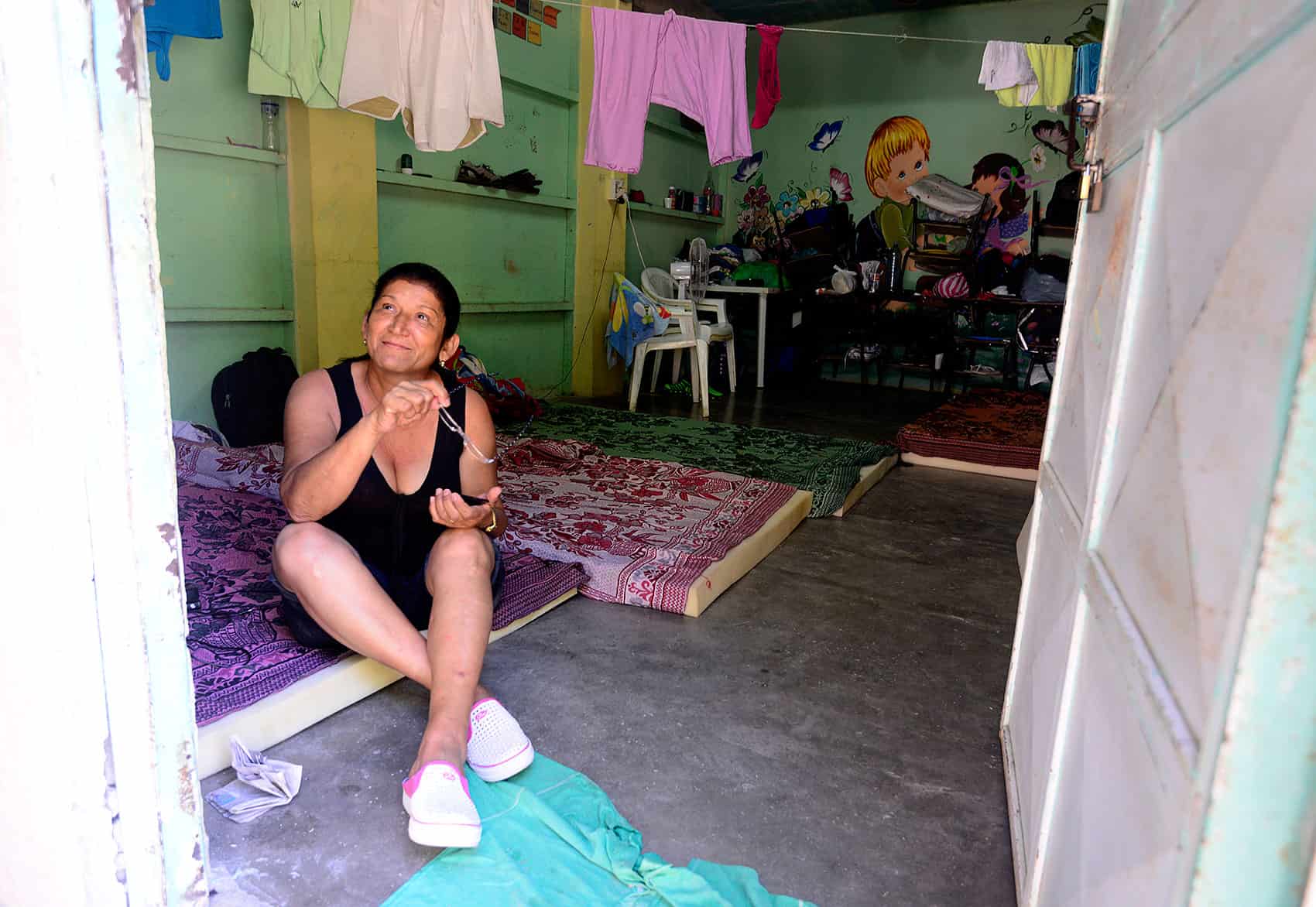 Maritza Guerra, 52, sits on her mattress in Iglesia Bethel, a church that has been converted into a camp for Cuban migrants in Liberia. (Lindsay Fendt/The Tico Times)

“I’m 33, no, 32. I turn 33 on Jan. 11,” he told The Tico Times with a smile at the Bethel Church shelter here where Rubio and 75 other Cuban migrants have been living for the last month. “My plan is to celebrate it in the United States.”

But Rubio’s chances of making it to the U.S. in time for his birthday got slimmer Tuesday evening when the latest attempt by the Costa Rican government to negotiate a pathway through Central America for the migrants fell apart. Belize’s refusal to receive the migrants means that thousands of Cuban migrants will remain — for the time being at least — stuck in temporary shelters as the holidays approach.

Foreign Minister Manuel González, who is preparing to visit Cuba with President Luis Guillermo Solís on Dec. 14, said that the Costa Rican government is “deeply disappointed” with Belize’s decision, according to a statement from the ministry.

“Without a doubt, this decision significantly complicates the situation for the Cuban migrants in Costa Rica and postpones their exit from the country,” González said Tuesday evening.

The Foreign Ministry urged Cubans who are thinking of traveling to the U.S. through Central America to avoid leaving now. Costa Rica does not have the means to house the growing number of Cubans, the Foreign Ministry said . According to figures from the Immigration Administration, more than 4,300 Cubans with temporary transit visas are in Costa Rica and roughly 3,400 are staying in 14 different temporary shelters — like the one Rubio is in at Liberia. An estimated 100 Cubans arrive daily at Costa Rica’s southern border with Panama.

Costa Rica has been housing Cuban migrants since mid-November when Nicaragua closed its border to them on Nov. 15, with Nicaraguan soldiers pushing back several hundred migrants with truncheons and tear gas. Nicaragua’s refusal to let the Cubans pass on their way to the United States exacerbated an already complicated situation. Central American countries require Cubans to have entry visas, including Costa Rica. But faced with a sudden influx of migrants, Costa Rica started issuing temporary transit visas to the migrants with the hope that they would continue on their way to the U.S. where they enjoy preferential immigration status.

Belize’s government said that the subject of Cuban immigration was a regional issue that should be addressed by all the countries in the isthmus. But the first go at a regional solution fell flat. A meeting of foreign ministers from the Central American Integration System, or SICA, on Nov. 25 did not resolve the crisis. In the following weeks, Guatemala announced that it would not receive the migrants, and on Dec. 3. Mexico said it would receive them but that they had to pass through another country first.

As regional leaders continue to play hot potato with the migrants, life in the camps drags on. Here at the Bethel camp outside downtown Liberia, lines of colorful laundry drying in the sun crisscross the open space around the camp. Portable toilets at the far fence supplement the handful of restrooms and wash stations. A police officer is stationed at the gate to the camp, which closes at midnight.

Men and women look for chores or other tasks to keep themselves occupied. One group of men started clearing brush around a fence. Another sat in the shade talking as a man gave haircuts with an electric razor. Those with smartphones used Facebook and WhastApp to keep in touch with family. Others lounge in the heat on National Emergency Commission stamped foam mattresses, surfing YouTube to pass the time.

The main pastime is listening to the news, hoping for word of when they will be able to leave.

“You spend the days listening to the news,” said Yuniesky Martínez, a 33-year-old electrical engineer. “Bad news can change everyone’s mood. But when there’s something positive people get excited. They’re ready to move forward, make something of themselves.”

Liudmila Pérez, a 25-year-old high school Spanish teacher back in Cuba, mopped the floor in the room she shared with three other people. The boredom was the worst part, she said.

The Costa Rica government “covers our basic needs. Nothing luxurious but all the basics,” said Esmirdo Pérez, 50, who was cutting grass with a machete. “The Costa Ricans have been too nice to us,” he said.

No one wanted to talk about it much but the possibility of passing Christmas in the migrant shelter loomed over many, including Pérez.