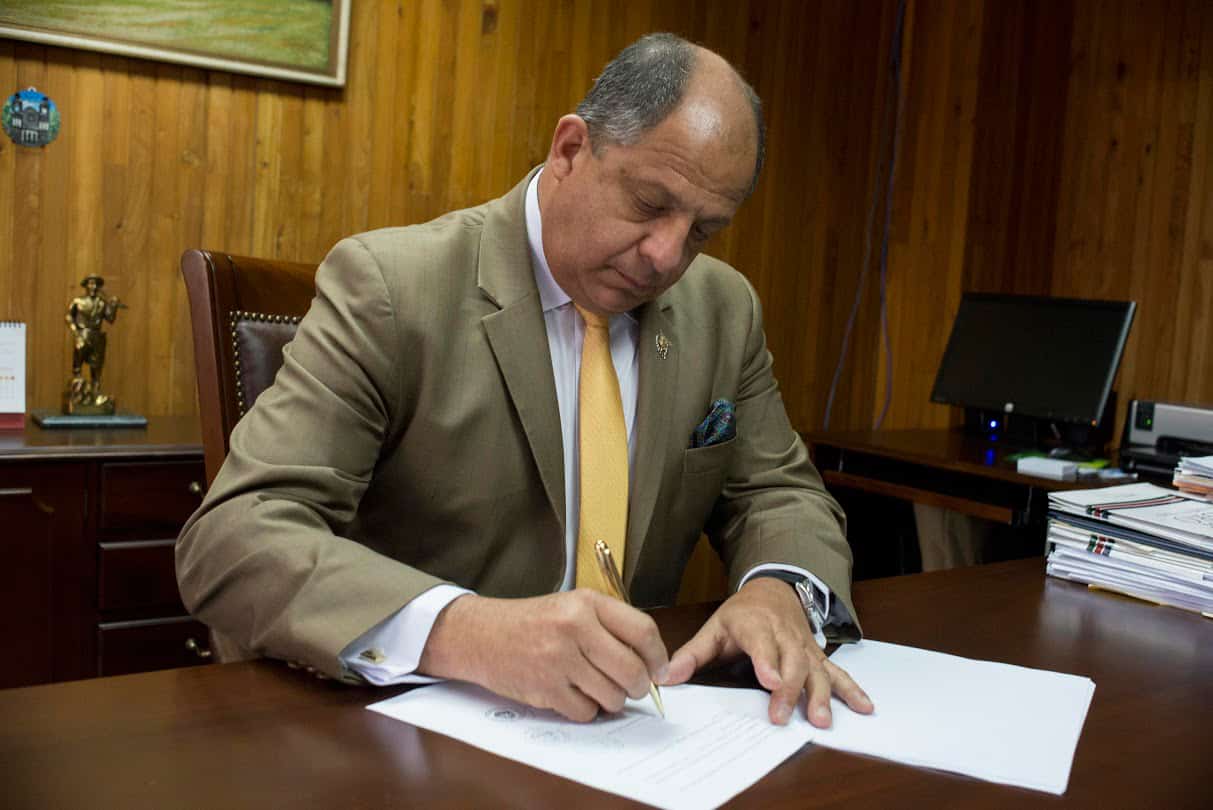 After years of court battles, legislative wrangling and consultations with medical organizations, in vitro fertilization is once again legal in Costa Rica.

President Luis Guillermo Solís signed a decree Thursday to regulate IVF in Costa Rica, opening the possibility for people to pursue the fertility treatment here for the first time in 15 years. Solís signed the decree despite hesitation from the Costa Rican Social Security System, which runs the country’s socialized healthcare system.

Solís signed the decree Thursday afternoon at his desk in Casa Presidencial, without fanfare, after he received comments on the decree’s language from the Doctors and Surgeons Association and the Costa Rican Social Security System, also known as the Caja.

Costa Rica became the only country in the Western Hemisphere to ban the fertility procedure after the Constitutional Chamber of the Supreme Court decided in 2000 that IVF violated the right to life. Several families sued the government in a case that eventually reached the Inter-American Court of Human Rights, which ruled that Costa Rica must regulate IVF by 2012.

The country missed that deadline. The Legislative Assembly has struggled to pass a bill that complies with the court’s decision, resulting in the threat of sanctions from the human rights court. Solís said last month that if he did not take action unilaterally the country’s international standing as a defender of human rights would be at risk.

The procedure would be made available to the public through the Caja or in private practices.

The Doctors Association said in a statement Wednesday that its recommendations were “minimal” and that it didn’t oppose the medical or legal foundation of the decree. The Doctors Association recommended adding a line that would allow couples to donate their unused fertilized eggs to other infertile couples. There are 16 doctors in Costa Rica with a specialization in reproductive health, according to the statement.

“We’ve studied this for many months and we’re quite confident that its regulation by decree is possible,” Solís told reporters Thursday.

María del Rocío Sáenz Madrigal, executive president of the Caja, isn’t so sure. In a post on the Caja’s Facebook page, Sáenz said that the Caja’s Board of Directors believed that as a matter of fundamental rights, regulation of IVF should be left to the legislature. Sáenz insisted that the Caja was not opposed to IVF, just the president’s decision to regulate it via decree.

Advocates for IVF have said that the procedure is not regulated by specific laws in many countries and that there is no reason to believe the Doctors Association and the Health Ministry would not be able to effectively police any potential problems.

Plaintiffs in the Inter-American Court of Human Rights case celebrated the president’s executive action after expressing their initial dismay last week when he only released draft language to regulate IVF.

“I’m very happy,” Ana Castillo, one of the plaintiffs, told The Tico Times. “We know that there is still a ways to go, there will be opposition, but it appears that after 15 years we can finally see the light and hope for these families who truly want a child.”

The decree goes into effect as soon as it is published in the official government newspaper, La Gaceta, which could be as early as Friday.

Read the IVF decree (in Spanish)

Eligible Canadian residents will receive COVID-19 insurance included in the price of their international round-trip ticket with Air Canada, news…