US sanctions lost in Venezuela’s translation 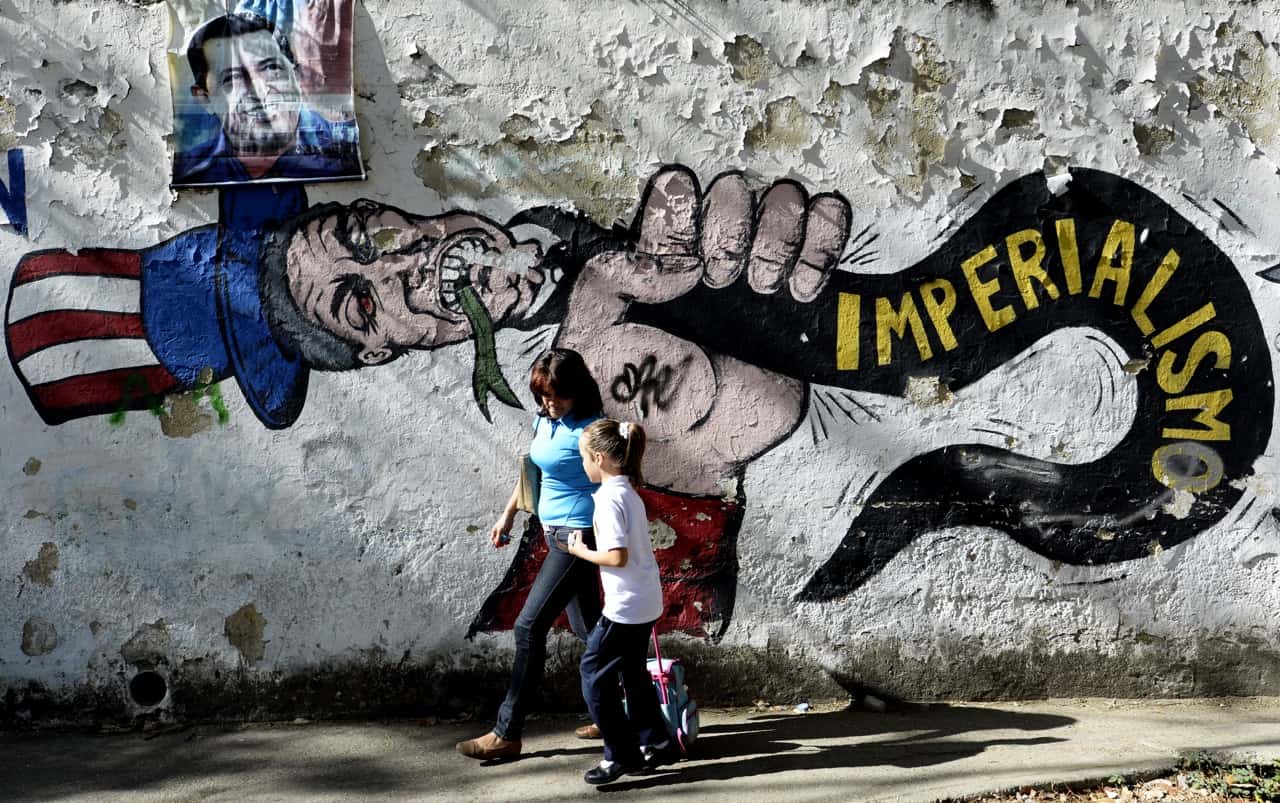 A woman and girl walk in front of a graffiti of Uncle Sam in Caracas on March 11, 2015. (Federico Parra/AFP)

WASHINGTON D.C. — By targeting top Venezuelan officials this week with new sanctions, the Obama administration said it wanted to send a strong message in defense of human rights and democracy.

The message that got through may have been a little stronger than intended.

Any focus on the individuals sanctioned or the human rights record of President Nicolás Maduro was rapidly eclipsed by reaction to language in the president’s executive order declaring a “national emergency” and “an unusual and extraordinary threat to the national security and foreign policy of the United States.”

Maduro was quick with fiery denunciations of Washington and what he alleged were its plans to invade, and by Tuesday evening, even Venezuela’s opposition sought to distance itself from the U.S. measures, issuing a statement that began: “Venezuela is not a threat to any nation.”

Opposition leaders, who generally are close with the United States, said they rejected the use of unilateral sanctions. “We appreciate and are grateful for the support of the international community, but we neither want nor accept that any of its members take on roles that are ours to assume,” read their statement.

“Just as we reject Cuba’s offensive meddling, we cannot support nor accept any other nation’s,” the statement continued. “This is a struggle among Venezuelans for Venezuela.”

The U.S. measures freeze the U.S. assets of seven Venezuelan officials, mostly the heads of the country’s security agencies, and prohibit Americans from doing business with them.

On Wednesday, U.S. officials acknowledged the reaction of the opposition to the sanctions but said they expected it to be short in duration.

Many in the opposition have “a real ambivalence” about the measures, said a senior State Department official, who spoke on the condition of anonymity under administration rules.

“One part of it is, ‘Go for it and call these people out.’ Another part is being somewhat defensive at . . . being labeled” as unpatriotic.

“It’s remarkable that the [Venezuelan] government can say the most outlandish things about the U.S. government — what is this, the 16th or 17th coup attempt that we’re doing? And now we’re invading?” the official said. “The shelf life of all of these accusations is what, a day or two? Even the dullest of media consumers is going to see that there is no invasion.”

“Let’s see what the crisis of the day is a couple of days from now,” the official said.

The “emergency” declaration and labeling of Venezuela as a “security threat” are legal formalities used in many other instances when sanctions are applied, administration officials said. The language does not represent a more severe assessment of the Maduro government, they said.

But such nuances stood little chance in the meat grinder of Venezuela’s rough political culture, where state-financed and pro-government broadcasters dominate the airwaves.

“No one is talking this week about the empty shelves in the supermarkets or unemployment,” he said. “All they’re talking about is the American decision to sanction Venezuela.”

Maduro’s approval rating has slumped to its lowest levels in his two-year presidency, 23 percent in the latest Datanálisis survey, as the fall in oil prices drives his government into a tailspin. With national legislative elections probably coming this summer, the opposition faces its best opportunity in more than a decade to oust the socialist government at the ballot box and force a recall of Maduro after that.

Maduro would love the chance to have the United States as his main adversary and not Venezuela’s opposition leaders, who have been trying to win over former supporters of the late President Hugo Chávez who are weary of corruption, soaring crime and the world’s highest inflation rate.

Reeling from a series of clumsy and ineffective economic measures in recent months, Maduro this week has steadied himself and adopted a fighting stance to cast himself as patriot in chief. He has asked the National Assembly, which his United Socialist Party controls, for new decree powers, and plans to personally lead military drills in preparation for a U.S. invasion.