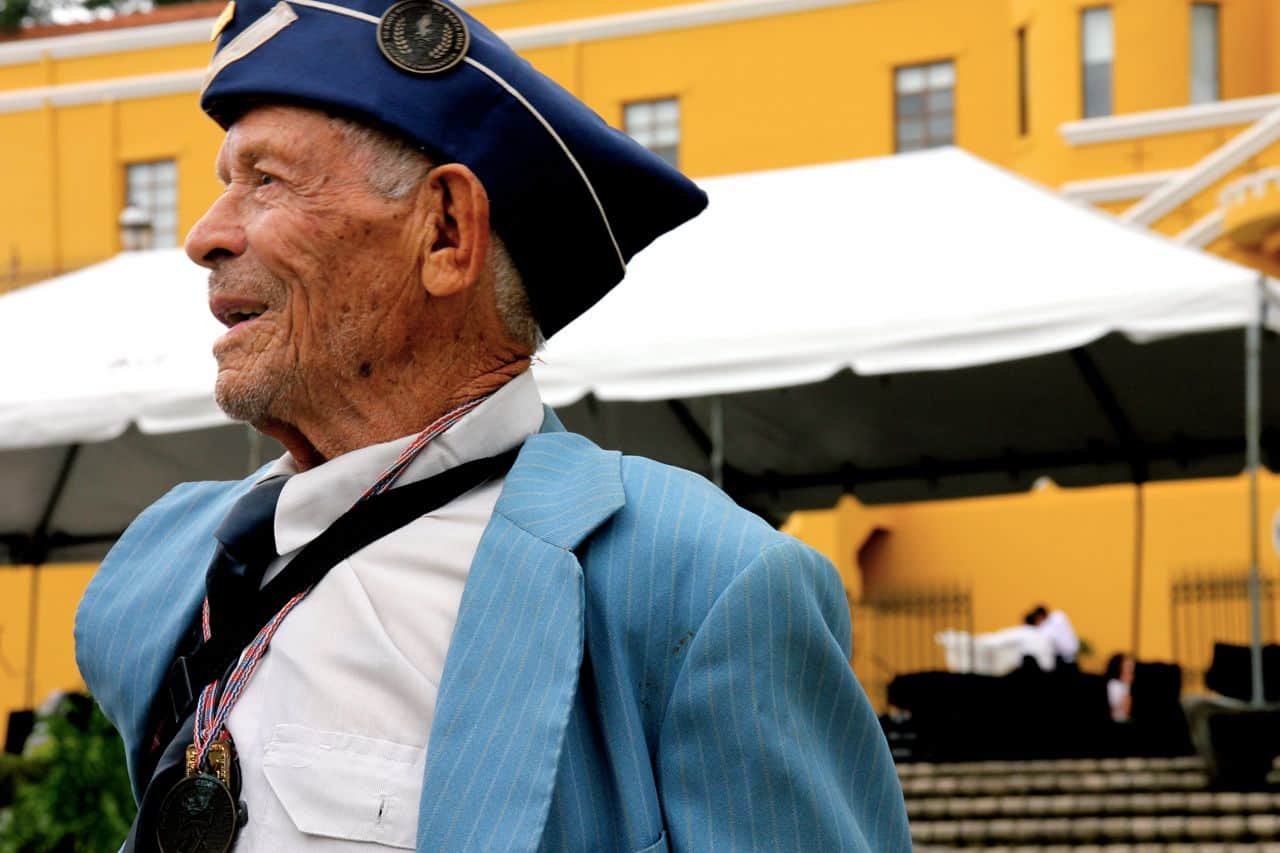 Jesús María Ramírez, 95, at the commemoration of the abolishment of the army in Plaza de la Democracia, in San José, on Monday, Dec. 1, 2014. Ramírez said he served with U.S. troops during World War II in 1942. (Robert Isenberg/The Tico Times)

Standing before the marigold crenelated National Museum — once the Bellavista Fortress that served as a barracks for Costa Rican troops — President Luis Guillermo Solís celebrated the 66th anniversary of the abolition of the army alongside veterans of the Civil War and National Army and students on Monday.

Wearing their navy-colored caps, surviving veterans looked on as the president gave his remarks from under a tent in the Plaza de la Democracia in downtown San José. On Dec. 1, 1948, President José Figueres abolished the armed services in Costa Rica soon after the end of the country’s civil war, a measure that was cemented in the 1949 Constitution that established the Second Republic.

“This hope, that every day there are more children who will become productive citizens without the use of arms – this is the society we want,” Solís said.

“That’s the gift that our great leader, don José Figueres, left us,” veteran Alejandro Rivera Guitérrez told The Tico Times. “To abolish the army and invest in education before weapons, it was the greatest thing he ever did. Today, we’re reaping the benefits of that and the younger generations are growing up in a country without an army,” added Rivera, who was 19 when he joined the army.

Solís said in his remarks that while Costa Rica has created a society without a military, the promise of social justice remained unfulfilled. The president stressed the need to create good jobs so that younger generations could escape the “structural violence” of poverty.

“It is without a doubt the most perverse kind of violence, because it’s quiet, silent and opaque, but affects those every day who do without food or a roof to shelter themselves,” Solís said.

Veteran Norman Aguilar was still emotional when he recounted how only four of the 14 men in his company survived the civil war.

“Everyone’s forgotten about these people and it’s a shame,” Aguilar said, referring to those who fought in 1948. “If it weren’t for us, we wouldn’t be celebrating,” he said.

Aguilar lamented that many of the monuments to veterans are forgotten, and said he was disappointed that the statue of Figueres had been removed from the plaza where he ceremonially struck the fortress with a hammer as a sign of the end of the armed forces in Costa Rica.

Aguilar might be disappointed that many people have forgotten the men and women who fought in the name of Costa Rica, but he might take some solace in the fact that Solís announced Figueres’ statue would return to the Plaza de la Democracia sometime in 2015.