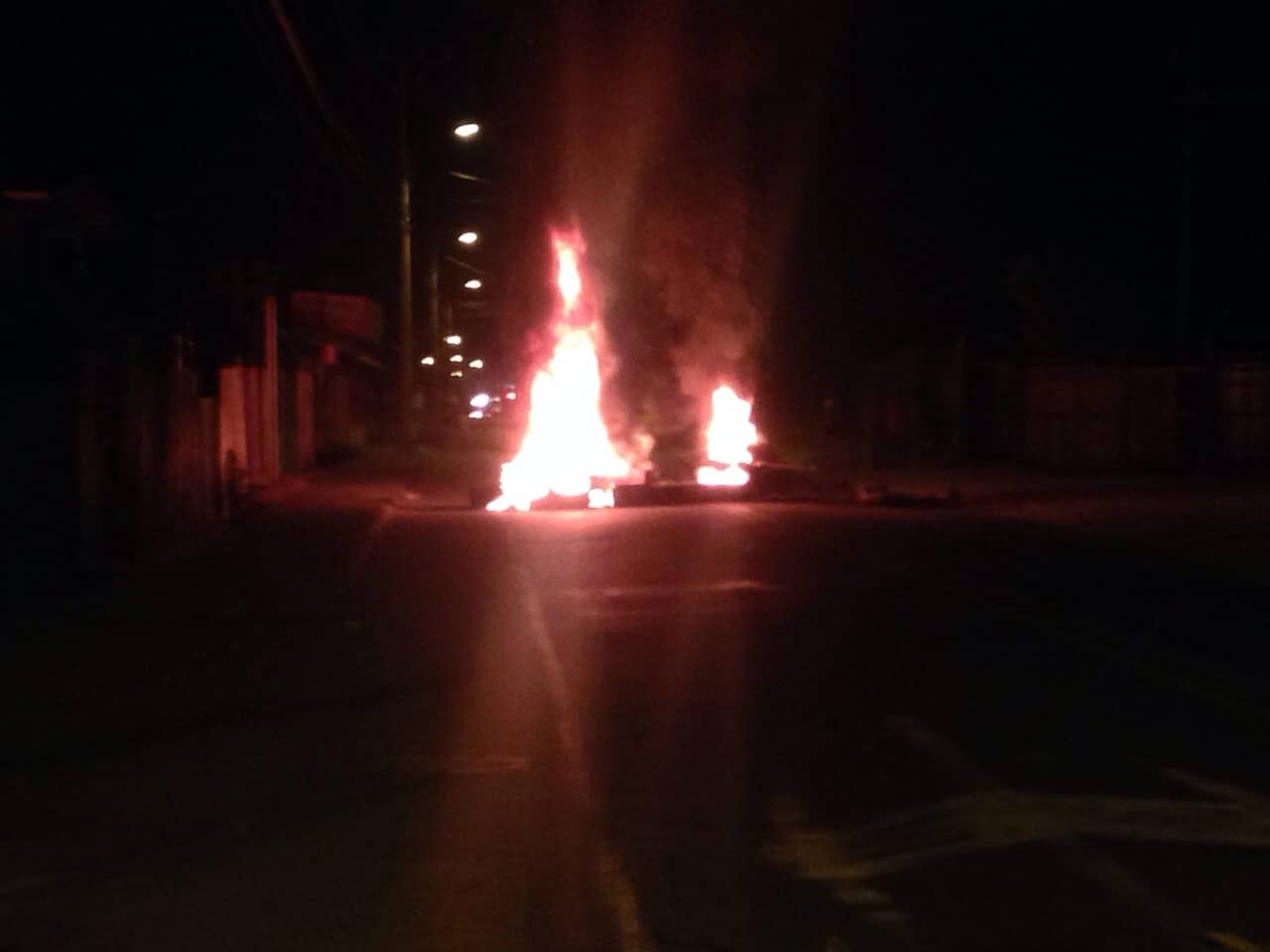 Protesters in the Limón neighborhood of Cieneguita burn debris in a street blockade on Friday, Oct. 24, 2014. Most of the ongoing acts of violence and vandalism take place at night. This one occurred just before midnight. (The Tico Times)

Authorities in Costa Rica have opened active criminal investigations to determine who organized the ongoing acts of violence and vandalism that began last week and continued through Monday during a dockworkers strike that briefly paralyzed the country’s most important commercial port in the Caribbean province of Limón.

The dockworkers union, SINTRAJAP, which opposes the $1 billion port renovation concession granted to the Dutch company APM Terminals, adamantly denies any link to the perpetrators of the violence.

Public Security Vice Minister Gustavo Mata told The Tico Times on Wednesday that investigators are looking into alleged payments made to instigators of the violence that has occurred in Limón since last Thursday, including the burning of at least two containers, the blockading of roads, constant tire-burning, attacks against police by stone-throwing thugs, and several gunshots. Most of the incidents have occurred late at night or early in the morning. One participant in the violence, who asked that his name be withheld, told The Tico Times that known gang members or organized crime affiliates from marginal neighborhoods of Limón allegedly were paid between ₡50,000 ($93) and ₡200,000 ($374) per day to set up road blockades and vandalize vehicles and property. In the neighborhood of Limón 2000, whose young residents often are targeted by organized crime recruiters and drug traffickers, locals supposedly were offered ₡100,000 ($188) per day to participate; in Cieneguita, they allegedly were offered ₡50,000; and in Barrio La Colina, ₡80,000 ($150), the source said. Mata said that a ministry investigation seemed to confirm those figures. He also said that members of organized crime are responsible for distributing the payments in the neighborhoods.

The investigation began when a pair of audio recordings were leaked to members of the press and to authorities over the weekend. Allegedly recorded and sent via the mobile application WhatsApp last Thursday night, the recordings urge listeners to engage in acts of violence, vandalism and intimidation. In one recording, an unidentified man states:

Tomorrow, Friday, attention everyone: You have the green light to commit vandalism. Put up barricades, burn tires, spread trash, tree trunks, everything. Block the street. Tomorrow se despicha Tere [a Costa Rican idiom for causing chaos]. … Possibly there will be 300 semi-trailers parked on Route 32 – no one leaves or enters Limón with containers. … Break some bus windows, … tomorrow the country collapses.

Listen to the recording:

The Tico Times was unable to independently confirm the source of that recording. But authorities said they are treating it as evidence in their ongoing criminal probe.

Mata told the Costa Rican daily La Nación last week that he did not believe the union was involved in creating the disturbances. SINTRAJAP Secretary Ronaldo Blear also told La Nación last Friday that the violence was not instigated by the union, but rather stemmed from the “dissatisfaction” of Limón residents. A burning trailer blocks a bridge in Limón over the weekend. The Tico Times

A vox populi report by The Tico Times yesterday, however, seems to indicate Limonenses are more dissatisfied with the union than with port deal. And a press release posted on APM’s Facebook page cites a poll by Borges y Asociados that claims nearly 86 percent of Limonenses support the port project and believe it will help bring progress and development to Costa Rica’s economically struggling Caribbean province.

Last Wednesday,  Blear told La Nación that, “If the government strikes us, we’ll strike back. What they did to us today was a dirty trick.”

The union leader was referring to the decision by the administration of President Luis Guillermo Solís to break the strike and regain control of the ports in Moín and Limón on Wednesday night. Dozens of protesters and striking workers were arrested. SINTRAJAP Secretary Ronaldo Blear, at right in orange shirt, and other union members hold a press conference on Wednesday, Oct. 29, 2014. The Tico Times

Then, talks between the Solís administration and union leaders broke off Tuesday after protesters burned a poster with President Solís’ image. Tempers cooled, and talks are set to resume tomorrow morning at 9 a.m. The union is demanding the government renegotiate one clause of the concessions contract, which they say gives APM a monopoly on container handling. Critics of the union say it’s the port authority, JAPDEVA, that has the monopoly, and a 33-year concession for a $1 billion port project that Costa Rica could never build on its own is more than reasonable.

In a press conference on Wednesday, Blear – using a Costa Rican saying that translates directly as “don’t pull the calf’s tail” – warned officials: “No le jalen el rabo a la ternera, be very, very careful. The violence in Limón hasn’t even started yet.”

The Tico Times attempted to speak with Blear on Wednesday, but was unable to reach him on his cellphone.

Who is Ronaldo Blear? Read this 2011 Tico Times interview with the union leader.