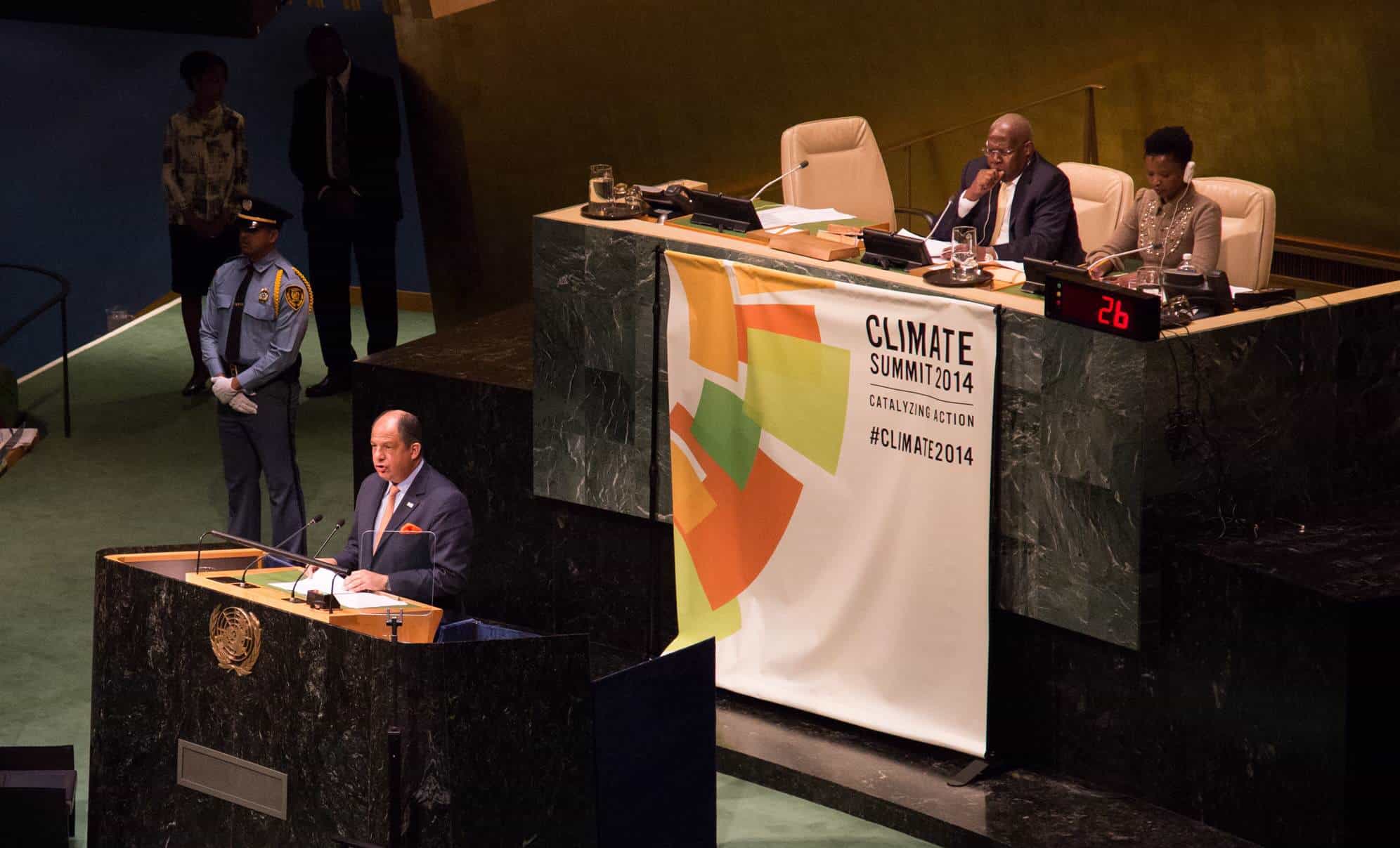 Costa Rican President Luis Guillermo Solís reaffirmed his country's commitment to becoming carbon-neutral by 2021, during a speech at the U.N. Climate Summit in New York on Tuesday, Sept. 23, 2014. ((Courtesy of Casa Presidencial))

Costa Rican President Luis Guillermo Solís doubled down on his country’s pledge to reach carbon neutrality by 2021 during an address at the U.N. Climate Summit in New York, on Tuesday morning. There, the president called on wealthier nations to do more to facilitate climate adaptation and mitigation efforts in middle and low-income nations.

Solís said that his administration would push for a new biofuel bus system and electric railway along with a continued push for renewable energy sources to address climate change.

“This will permit a substantial decrease in metropolitan traffic flow, revolutionize car culture in my country and will significantly reduce the use of private and public vehicles as well as carbon emissions,” Solís said.

Despite the negative impact on Costa Rica’s hydroelectric capabilities due to changing rain patterns, Solís said the country was still able to generate 90 percent of its electricity from renewable sources, including wind and geothermal. The president claimed that once the Reventazón Hydroelectric Project is operational in 2016, Costa Rica’ electrical matrix will be 100 percent renewable.

Solís also called on the globe’s largest carbon dioxide emitters to take a greater leadership role alongside smaller countries like Costa Rica. The president expressed his support for a universal climate change plan and said that any such agreement must “recognize the principle of common but differentiated responsibilities.”

“Developing countries cannot continue subsidizing emissions from the most polluting countries. The time for talk is over and the time for action is now,” Solís said.

The president said that continued investment in renewables and energy efficiency would not be possible for middle-income countries like Costa Rica without financial support from wealthier nations.

The U.N. Economic Commission for Latin Ameria and the Caribbean released a report Monday estimating that climate change could cost Latin America and the Caribbean 2.5 percent of the region’s gross domestic product if temperatures rise 2.5 degrees Celsius over the historical average. While Latin America is a low carbon emitter, the region is especially vulnerable to the effects of climate change, according to the report.