Against the odds, Costa Rica plot 1990 repeat in Brazil 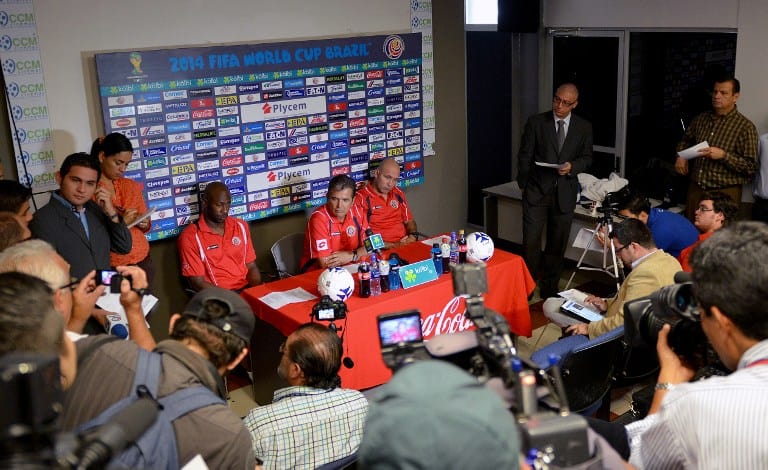 Having landed themselves a nightmare group at the World Cup, Costa Rica hopes a blend of tactical stability and technical effervescence will enable them to pull off a shock in Brazil.

The Central American minnows excelled in qualifying, finishing second behind the United States in the final phase of CONCACAF preliminaries and reaching the World Cup with two games to spare, but the draw brought them down to earth with a bump.

Italy. England. Uruguay in Group D. No other group features three former World Cup winners and only Australia — drawn alongside Spain, the Netherlands and Chile in Group B — have longer odds of reaching the last 16 than Costa Rica.

The Costa Ricans have previous experience when it comes to World Cup surprises, however, having reached the round of 16 in their maiden appearance at the 1990 tournament in Italy.

A side managed by well-travelled Serbia-born coach Bora Milutinovic shocked Scotland and Sweden in the group phase, before losing to Czechoslovakia in Bari in the knockout rounds.

The chances of a repeat performance appear remote, but Colombian coach Jorge Luis Pinto says that his side will be prepared for the challenges awaiting them in Group D.

“They are very good, powerful teams,” he said of Costa Rica’s opponents in a recent interview with Colombian newspaper El Heraldo de Colombia.

“We respect them, but we have no fear. They are great teams, so we will meet them with greatness.

“Uruguay are tough, with very accomplished forwards, and England have a faster, more vertical game, without as much precision.”

Pinto has a reputation for producing tactically well-organized teams, and he is also blessed with some gifted forward players.

Currently on loan at Olympiakos, the 21-year-old caught the eye recently with a fine goal in the Greek club’s shock win over Manchester United in the Champions League and also scored a delicate chip in Costa Rica’s last friendly game — a 2-1 win at home to Paraguay.

However, the team will sorely miss Everton wide player Bryan Oviedo, who has failed to recover well enough from a distressing double leg fracture in an FA Cup game against Stevenage in January.

Costa Rica fell at the first hurdle in its last appearance at a World Cup in 2006, losing all three of their group games against Ecuador, Poland and hosts Germany.

Pinto’s side play friendly games against Japan and Ireland in early June before opening their World Cup campaign against South American champions Uruguay in the northern coastal resort of Fortaleza on June 14.

If you have ever been to Costa Rica or thought of taking a trip there, you have likely heard about…