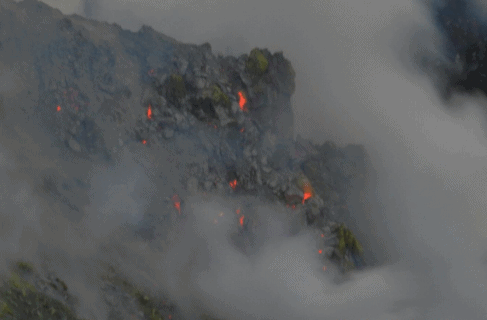 Poás Volcano is glowing red, and visitors to Poás Volcano National Park can take a closer (but still safe) look. (Via Carlos Ramírez, the National Seismological Network at the University of Costa Rica )

Costa Rican officials don’t mind the glowing, fuming volcano. In fact, you can take a closer look at Poás Volcano this weekend from a lookout point at the Poás National Park. The park, located a short drive from the Juan Santamaría International Airport in Alajuela, is open daily from 8 a.m. to 3:30 p.m..

The National Seismological Network at the University of Costa Rica reported the volcano’s incandescence Thursday night. The volcano’s dome has heated up to 580 degrees Celsius (1,076 degrees Fahrenheit) causing the crag to glow red, according to scientists Gino González and Carlos Ramírez. The report says the phenomenon has occurred as recently as May 2013 and August 2011, and neither time an eruption occurred.

González told La Nación that the Poás Volcano presents no current risk. He warned that if you have respiratory problems it’s best to spend only a short period of time at the lookout observing the volcano due to the acidic smoke fumes. Normally the incandescence lasts for about a month.

Several of Central America’s volcanoes have seen activity in the past month. But González told The Tico Times that  the rumblings in other countries doesn’t mean eruptions will happen in Costa Rica. He and other volcanologists plan to make frequent trips to the crater during 2014 to monitor its activity. via Carlos Ramírez, the National Seismological Network at the University of Costa Rica