The canals of Tortuguero: Monkeys, toucans and caimans, diay 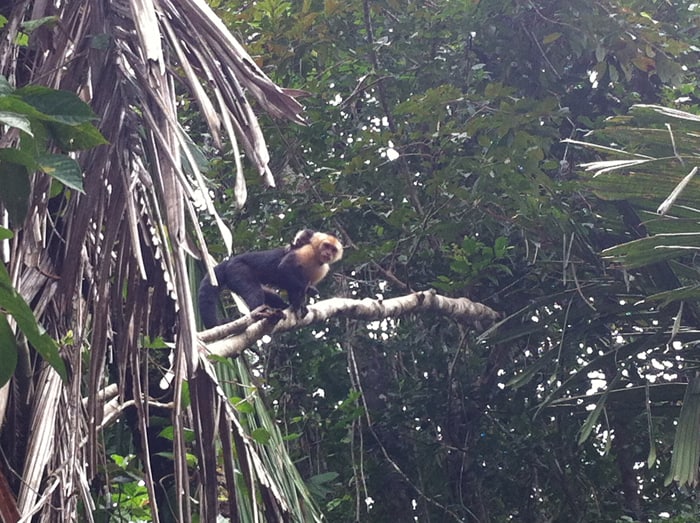 A capuchin monkey with a baby on her back suddenly spots a tourist. (Karl Kahler/The Tico Times)

TORTUGUERO, Limón — Five minutes into our 8:30 a.m. canal tour, we were already pulling over to see why another boat had stopped. It turned out to be a big orange iguana in a tree.

As we motored up the Tortuguero Canal, toucans exploded in flight overhead.

Closer to shore we came upon a stranger sight: an anhinga, a cousin of the cormorant that was standing on a branch over the water with its wings completely spread out.

Diego said this bird wants to return to the water, lose its feathers and become a fish again. Look how long it has to stand with its wings spread to dry them, because it can’t fly right with wet wings. Maybe it’s time to give up on being a bird.

With swallows darting over our boat, we heard the eerie hoots of howler monkeys in the distance, warning other monkeys to stay away from their turf.

“This is the loudest animal in the world after the blue whale,” Diego said. It has a hollow bone in its throat that creates an echo chamber that transmits an otherworldly noise for great distances. Yet it’s a very lazy animal, the sloth of the monkey kingdom, because its leafy diet provides so little energy.

As we approached the Palma Canal, Diego pointed out how its water was the color of dark chocolate, and we could clearly see that at the mouth of canal dark brown water collided with light brown water but didn’t mix, like they were oil and water.

Diego said the canal’s water is dark brown because of tannins released by palm trees. And the reason the waters don’t mix is because they are different temperatures.

Diego asked Chito, our captain, to take us up the canal, and he obliged, throttling down considerably to explore this eerie canal.

It reminded me of “Apocalypse Now,” floating up a tropical river into the unknown, everyone on the boat silent, watchful, on edge.

But instead of Col. Kurtz and his men, it was a troop of white-faced monkeys that showed up to greet us, looking for food in a tree next to our boat.

At the bottom of the tree, Diego spotted a couple of Jesus Christ lizards, basilisks lying on a branch. He said they would probably start running across the water if those monkeys came any closer, because the monkeys will eat them.

Diego asked Chito to ground the boat at an earthen ramp, and he crawled out of the boat and said, “I’m going to go risk my life for you.”

I said, “You’re going to risk your pants,” looking at his spotless adventure pants.

A minute later, Diego shouted that we should “hurry, hurry, hurry” to see spider monkeys. We spilled out of the boat and ran toward him.

The monkeys were moving from branch to branch in the trees in front of us, sometimes jumping from a higher branch to a very flexible lower branch, and using their hands, feet and tail to grab on. They were incredibly acrobatic and most amusing.

It was a monkey trifecta — we saw all three of the monkey species that live in Tortuguero inside of 30 minutes.

But the whole reason Diego pulled the boat over was to catch one of these, he said, and he caught one with his hands and showed it to us.

It was a strawberry poison dart frog. This pretty little frog contains a fair amount of venom, but it doesn’t have pointy teeth or any other apparatus to deliver this venom to creatures that are bothering it, other than to secrete it through its skin.

The evolutionary strategy of poison dart frogs is to teach predators that eating them will be one of the worst experiences of their lives, if not their last. The frogs have all developed brilliant colors so that no predator could possibly mistake them for an ordinary frog that would be good to eat.

As we set out again in the boat, Diego said he and Chito were scratching their heads that we hadn’t seen any caimans. They were here yesterday and the day before….

There’s a caiman! Chito brought the boat around so we could get a closer look at the big lizard. He was a beauty, but he slowly slithered away.

Then we came upon another big caiman sunning himself on top of some debris at the edge of the canal. He paid no attention when we cruised up next to him and took a bunch of pictures. He seemed to figure out pretty fast that we were neither dangerous predators nor easy prey.

We were on our way home, but the jungle saved the best for last. Capuchins were crossing the canal by jumping from a big palm tree on the left to a tree with lots of thin, flexible branches on the right.

We stopped the boat, and Diego pointed out that the lead jumper was a mother with a baby clinging to her back.

The mother jumped from the palm frond, the baby clinging to her back, and seemingly crash-landed on the sprawling tree to the right, clutching branches manically with her hands, feet and tail and then scrambling for others when those dipped too far.

The baby hung on for dear life. They always do.

There’s caiman in these waters, you know.