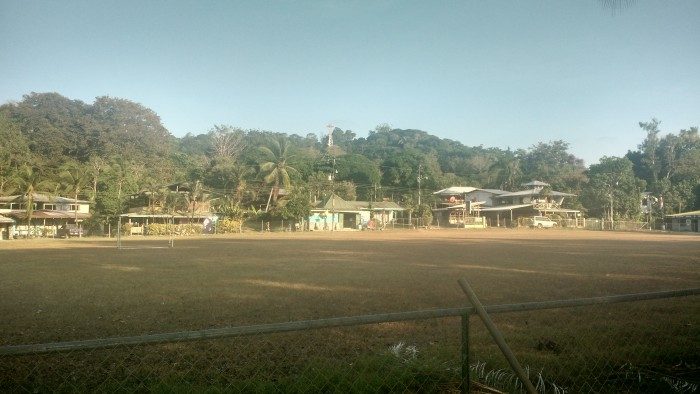 Construction should begin in June on a new Costa Rica-Panama bridge to replace this one at Sixaola. ((Courtesy of the Panamanian Finance Ministry))

The Costa Rican and Panamanian governments have agreed to build a new bridge over the Sixaola River estimated to cost $15 million, officials from Panama say.

The bridge, which should better facilitate car and foot traffic between the two Central American countries, will receive $10 million of its financing with resources stemming from the Infrastructure Fund for Mesoamerican and Caribbean Countries. The other $5 million will come from the Costa Rican government, which will house 62 percent of the bridge within its borders. Panama’s government has also agreed to supply a permanent source of human resources to develop and maintain the bridge.

In replacing a century-old bridge over the Sixaola River, on the southeast edge of Costa Rica in the province of Limón, this new structure should bring a greater sense of safety for travelers, said Omar Gómez, the director of the Finance Ministry’s Central American Coordinating Unit.

Both Panama and Costa Rica have conducted studies into the feasibility, socio-economic impact and environmental impact of the Costa Rica-Panama bridge. The finance ministries from both countries are preparing documents to call for international bids by the end of April, organized through the United Nations.

“The reference terms for the work should conclude by this month and it’s expected that construction will begin, at the latest, by June of this year, as is stated in the agreement between the two nations,” Gómez said.

One of the big economic benefits of the project is that both Costa Rican and Panamanian workers will be hired not only in the construction of the bridge, but also for other developmental plans along the Costa Rica-Panama border that are being brought up side-by-side with this initiative.

“As a complement to this construction and in accordance with the border development agreement, the Inter-American Development Bank is helping both countries with loans to modernize the border passings in Guabito, Renacimiento and Paso Canoas,” Gómez said, referring to three border areas between the two countries.

The bridge over the Sixaola River will measure 260 meters long and 17 meters wide to support vehicular traffic, and will also have a three-meter lane for bike and pedestrian crossing. The crossing into Sixaola is a main gateway for Costa Rican tourists to the Bocas del Toro islands off the northwest coast of Panama.