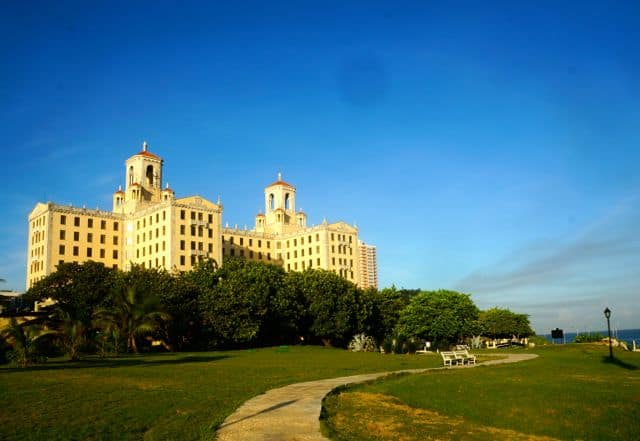 HAVANA, Cuba — In the soft heat of a Havana morning I step off the tile floors of the lobby at Hotel Nacional de Cuba and onto the vibrant grass of the gardens. As I make my way to the edge of the property alongside Aeleen Ortiz, the hotel’s historian, bright sun illuminates the scene before me.

A Cuban flag flaps boldly in the wind and classic cars zoom along the Malecón, a five-mile stretch of highway nicknamed “the longest sofa in the world.” The Gulf of Mexico stretches as far as the eye can see, and the outline of La Habana Vieja, the city’s historic center, shines in the distance. Florida is just 90 miles away.

“When you take a picture here there is no doubt that you are in Havana,” Aeleen says with a smile. I’m in Havana indeed. For more than 50 years, the doors of Cuba have been shut for most U.S. citizens. Despite the recent reopening of the U.S. Embassy in Havana, restrictions on tourism, though loosened, remain, and there still aren’t any direct commercial flights from the United States to Cuba. There are however, biweekly direct flights from San José, making Costa Rica the perfect launching pad for U.S. citizens looking to explore a destination well off the beaten path for many of their fellow countrymen.

A national monument, the Hotel Nacional de Cuba opened in 1930 and celebrates its 85th anniversary today, Dec. 30. Inaugurated as the National Hotel of Cuba (in English), the hotel was built and operated by U.S. owners as a hotel for U.S. tourists. When the hotel first opened, no Cubans were allowed to stay here.

The hotel was designed by the prestigious architectural firm McKim, Mead & White, which also designed such iconic buildings as Columbia University in New York City and the Boston Public Library. The architecture is similar to The Breakers in Palm Beach, Florida. Both hotels look nearly identical from the outside, although the Cuban property is adorned with chess pieces in tribute to a national pastime and José Raúl Capablanca, one of Cuba’s greatest heroes, world chess champion between 1921 and 1927. Inside the hotel lobby a world of the past awaits. The hotel is decorated in a 1930s Cuban style. Grand chandeliers fill the space with light, while mahogany furnishings and brass fixtures provide the final touches on the sense of time and space preserved here.

The hotel boasts a long list of famous guests displayed in the property’s Hall of Fame, including Gary Cooper and Erroll Flynn in the 1930s, Fred Astaire and Rita Hayworth in the 1940s, and Marlon Brando, Frank Sinatra, Ava Gardner and Walt Disney in the 1950s.

After the Cuban Revolution in 1959, the hotel shifted its focus to accommodate friends of the revolution, including Yuri Gagarin, the first man in space, and Gabriel García Márquez, author of “Love in the Time of Cholera.” Despite the U.S. ban on tourism, Hollywood elite have always seemed to find their way here, especially since the hotel began hosting a cinema festival in 1979. More recent guests have included Steven Spielberg, Leonardo DiCaprio, Danny Glover, Francis Ford Coppola, Michael Keaton, and yes, even Paris Hilton. A list of the rooms famous guests stayed in is available at the front desk, and several rooms are named after their most recognized occupants.

In addition to hosting a long line of famous guests, the hotel has also played witness to some of the most important events in Cuba’s history. “To know the story of the hotel is a summary of the history of Cuba,” Aeleen says. She explains that modern Cuban history can be divided into three periods, the first being that of Spanish colonization. Christopher Columbus reached Cuba on his first voyage to the New World in 1492 and Spanish settlements arose on the island beginning in 1511.

Because of its strategic location in the Gulf of Mexico, Cuba was Spain’s most important colony. The hotel sits in a neighborhood called Vedado, which means “prohibited.” During the Spanish rule this area was a forest, and it was prohibited for anything to be constructed here for fear that it would make the land more susceptible to pirates. Today the hotel looks out at the ruins of Morro Castle, a fortress that guards the entrance to Havana Bay.

The second period of Cuban history, according to Aeleen, is that of U.S. influence. In 1898, the United States won the Spanish-American war and gained control over Cuba. It was from this point on that many U.S. businesses set up on the island and Havana became a hot spot for gambling, prostitution and other illicit business activities involving the Batista regime and U.S. businessmen.

The Mafia also had a large presence in Cuba, and the hotel’s former casino served as the setting for the Havana Conference, a meeting between the U.S. and Sicilian Mafia in 1946. This meeting is depicted in the film “The Godfather Part II,” though the actual scenes were filmed in the Dominican Republic. The third and current period of Cuban history is that of the Revolution, which began when Fidel Castro overthrew the U.S.-backed government in 1959. Following Castro’s victory, gambling was made illegal and the hotel’s casino was shut down. The hotel’s name was also converted from English to Spanish.

“There was a reversal of what things were like in the ’50s,” Aeleen said.

This reversal came with many benefits for the people of Cuba, including universal health care, free education and more equality. In a place where prostitution once ran rampant, women and people of color especially have more options in today’s society.

“Today the women in Cuba are very equal,” she adds. Indeed, the grounds of the Hotel Nacional de Cuba are coated with history, and the most infamous chapter of Cuba’s history is not left out. There is a small museum onsite that shares the story of the Cuban Missile Crisis, which here is called the October Crisis. The museum is located in a system of underground tunnels that form a circle beneath the hotel’s gardens. Though there were never any nuclear weapons here, these tunnels housed periscopes used by Cuban intelligence in espionage efforts. Every year since 1962 the United States has voted to continue the embargo against Cuba. President Barack Obama’s recent efforts to restore relations with the island nation have many in the country excited about the possibility of more U.S. tourists.

“Many of our American guests currently come to the hotel in tour groups,” Aeleen said. “We hope that people will decide to travel here more on their own and maybe even just come to Cuba for a weekend.”