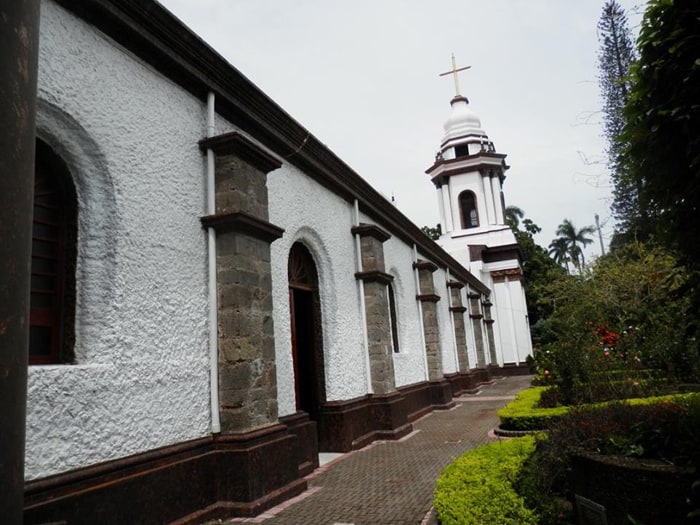 Every city has its secrets, every history its dark side. Scandals! Crimes! Duels! But there are also hidden treasures and heroes. Walking tours of Alajuela with historian Ronald Castro can show you the hidden history of this fascinating city.

It’s history that goes back beyond the Spanish conquest to the Catapa tribe that left symbols on the rocks along the Itiquís River. Find out how Costa Rica’s famous Lizano sauce was invented. What’s buried under the floor of the cathedral and why? Who was the woman who put an end to the death penalty in 1882? And who was the last man publicly executed on the same block where the central market now stands? Why is the Palmares park named for the city of Palmares? Alajuela Walking Tours take you on a historic journey.

There are four tours in all and each runs about two hours but Castro, who often appears on channel 11’s popular Informe 11 program, says the tour can stretch out if there is interest. You have a choice of four tours at ₡5,000 each ($10), or take the “super-tour” around the whole city with a visit to each of the founding barrios for ₡15,000. Jewels of Alajuela (Alhajas de Alajuela) starts at the statue of Juan Santamaría in the Plaza Santamaría with an explanation of the importance of the war of 1856 and the role of this legendary battle hero in the history of Costa Rica. Along the way Castro points out the old, elegant houses that were homes to such luminaries as presidents and soccer greats.

This tour includes the cathedral, reconstructed in 1941 and 1991 after earthquakes caused damage, and where the heart of president and strongman Tomás Guardia lies under a plaque in the center aisle. The church is on the site of the first chapel, a wooden structure authorized by the king of Spain in 1790. This neighborhood has many reminders of the past. An iron ring in the sidewalk below the second window of the municipal theater is the only one left to show where horses were tethered while their owners shopped or traded in the market. Castro explains the meaning of architectural symbols on the historic buildings that line the central park, and points out a house that was built by the city’s soccer team. Walking around the parks. Choose the Central park, the Palmares park or the Cemetery park, with talks on the statues and memorials, the neighborhood, the famous and the infamous who lived in the area, and long-gone institutions that played an important role in history.

The area around the Palmares park was inhabited in the 1600s near a swamp with deadly mosquitoes, which led to its demise. The “old” hospital across the street supposedly has a ghost and was the dropoff place for the more than 200 cadavers from the notorious train accident on the bridge over the Virillo river in 1926, and where neighbors were called upon to bring shovels to dig a common grave. Dark Alajuela (Alajuela Oscura). This tour tells about the duels, shootings, assassinations and executions that occurred in Alajuela. This can be arranged as an evening tour.

Route of Marcus Ramirez. “Marcus Ramirez” is the title of one of Costa Rica’s best literary works by author Carlos Luis Fallas, known as Calufa. The book is part of the high school curriculum. Not unlike Twain’s “Huckleberry Finn,” it’s the story of a boy from poverty who sets out to see the world of Costa Rica, a life that includes mischief and commentary on the political and social life of the country. Calufa was born in San Jose in 1909, but made Alajuela his home. He worked in the banana fields and on the railroad, became an active member of the communist party in the 1930s and was jailed for his activities. The story of Marcus Ramirez is centered around the barrio of El Llano and the tour ends with a visit to the restored chapel, built around 1883.

Custom tours can be arranged for special interests. A visit to the churches provides an interesting tour. The Corazón de Jesús (Heart of Jesus) church was built in 1926 for the Lebanese community that lived in the area. The Church of El Carmen was a working-class parish that became a Liberation Party stronghold, and the Agonía served an opposing political parish. The Methodist church founded by an Englishman in the 1920s was the first non-Catholic church in Alajuela in an era when Protestants were shunned as sinners and Catholics were encouraged to throw stones at their churches.

Tours can be arranged in English or Spanish. Contact Ronald Castro at alajuelahistorica@gmail.com or by phone at 7064-2842. Castro also writes an online bulletin on history and has bimonthly open-air tertulias (chats) at the Liberty Fountain on subjects of historical interest.