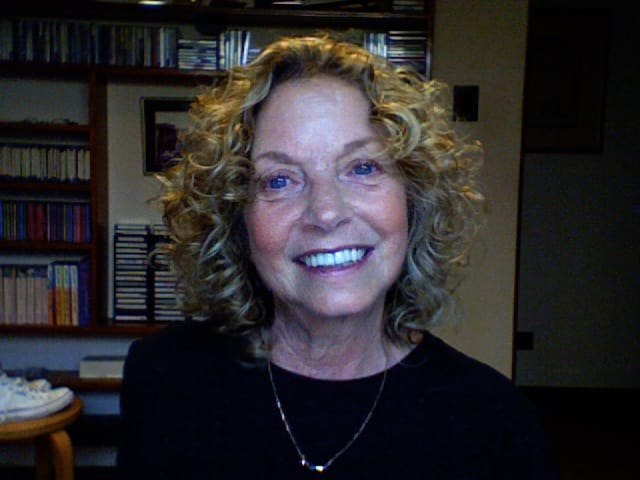 What led you to come live in Costa Rica?

Pretty well known story at this point.  I came on vacation back in 1999 and through a series of events like my girlfriend falling down 24 steps in the rainy season, I couldn’t leave. I decided to stay and finish my screenplay. That’s when I met Dave the Dude who said,” You’ve worked in radio all your life. Come up and work with me on the radio.”  So I did.  Married him 6 years later, becoming radio’s English-speaking monopoly.

How many years did you work at Radio 2 and where are you from originally?

I was a DJ at Radio Dos for 15 years. Born in Philadelphia, spent most of my career in New York City where my first husband Harley and I had companies, Radio Band of America and Penny Lane Studios. We did creative and music for radio and TV for just about everybody from American Airlines to Burger King to Xerox.

What brought you to Costa Rica?

When my husband died, it took years to close the businesses. I was pretty down. So I decided to do something different with my life. Like going on vacation to Costa Rica. I visited most of the country over three months, intending that to be it and go back to the States. I never did.

What were some of the highlights of your career at Radio 2? Please share some special anecdotes

I always had fun, and believe listeners did too, when artists visited.

Whether it was Paul McCartney who called on the way to his sound check or a member of Toto live in the cabina. As well as not so famous people like kids from the Peace Corp, on their way out of the country. Who would have thought we needed the Peace Corps in Costa Rica, but we do. Those kids are remarkable and listeners thought so too, calling in with questions. Dos was all about fun.

One of the big things, though, that I think made me realize Dos was also about information was the hurricane we had a few years back.  Remember that? It hit as a category one in Guanacaste but we were all indirectly affected.  For  a country that doesn’t have hurricanes, it really was a big deal. Everyone, from mountains to beaches, Gringos or Brits or Canadians or Ticos, needed help. And Dos was their jungle telephone.  Thankfully with help from Lady Sheila Pacheco who was still at the British Embassy, ICE, government officials, I was able to send out information to people, not to worry. You won’t lose your cell phone if you can’t pay your bill on time. Flights will be rescheduled. Date power would be restored. I became a touchstone, where people turned for help.

Also telling people what was going on. Whether it be a protest for women’s rights or whether it was a fiesta happening on the weekend that they should know about, or new artists that you should know about. Dos owner, Rolando, always gave me permission to mention whatever band, whatever group was flying in and performing, give them radio time. I also think that it was great that I was able to give time to ambassadors or chargé d’affaires to say goodbye to the country, like Sheila Pacheco and  Fitzgerald Haney

The other thing is I made so many friends. I don’t know their faces, but I do know their names and what they do. They would call and check in from time to time. There was ‘’Marco from the crazy project’’ who worked on robots and things like that. He’d call in and let us know what crazy thing he was up to.  Or Honey, the bee man up at the frontera. I worried about him and all those bees if I didn’t hear from him.  Or the boat captain/Chicago lawyer anchored in the northern Caribbean who ran to the airport to phone in updates when we had the face off with Nicaragua over the Rio San Juan.

There were so many, like Cecil who would call and correct me whenever I misspoke and make me laugh. Or Fernando, a client with a car parts company Munresa, who became a friend and a saviour whenever I did stupid car tricks like turn my car upside down into Rio Carazal.  Or a young girl who didn’t understand why I said “Yippeeee it’s Friday”. I told her she studied too hard and should go out on a date. She did, called to tell me about.  It was the friendships, I think, that I’ll take with me, that seems most important.

What plans do you have now?

Sleep in.  No more getting up at 2am.  And take a vacation. Heading to Clarksdale, Mississippi, where legend has it,  Robert Johnson sold his soul to The Devil to become the greatest guitarist in the world. And hear some great blues. Maybe go to Graceland, that would be fun. After that we’ll see. I have a couple of ideas, keep you posted.

A big thank you for letting me into your lives, share your mornings.   Costa Rica gave me my smile back.  I hope I returned the favor.