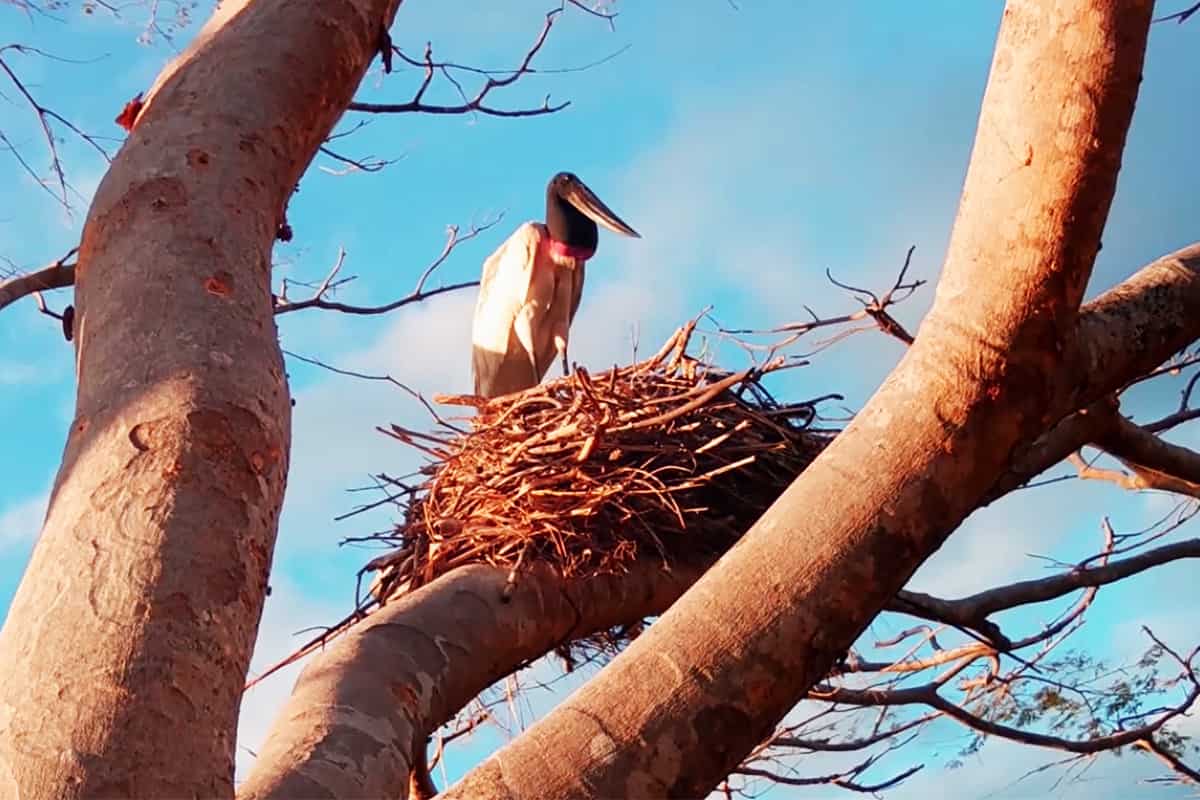 There are few big birds in Costa Rica. Great curassows and black guans are hefty. Great blue herons and great egrets are tall. Nobody pulls off the combo of big and tall like the jabiru (pronounce ha bee roo).

They stand about four and a half feet tall with long skinny stick-legs that attach to a big white stork body, topped off with a neck that starts out red then turns into a big black head with a long black up-turned beak. The bigness really jumps off the page at you. They’re slam-on-your-breaks-and-jump-out-of-the-car-to-look-at-that-giant-bird big.

Which I have done. Recently. If you saw a guy pulled over on the side of the road near Playas del Coco peering through his trusty truck binoculars at a pair of Jabirus in a nest in a sugar cane field with his two kids yelling at him to get back in his truck the other day, that was me.

I couldn’t find current information on the population size of jabirus in Costa Rica, but we can all assume it’s very small. I found a paper that said in the mid-90s there were 25 to 83 individuals in the entire country. Whatever the population is today, it’s being closely monitored by Costa Rica’s very own Johnny Villareal.

Besides having a name that sounds like a wild west gunslinger, Johnny Villareal is notable for his expertise working with the jabiru stork. I’ve heard he keeps a close eye on jabiru nests every year. Whenever I come across a nest, I text the location to a biologist friend who then sends it along to Johnny. I have a background life goal to make Johnny Villareal my friend and put camera traps on his jabiru nests.

Speaking of jabiru nests, I put a camera trap on a jabiru nest last year. As you’d expect, the results were awesome. During the month or so I had the camera pointed at the nest, a young pair of storks added some sticks, hung out and generally looked pretty but they never laid any eggs. Apparently, this is a thing that happens when they’re young and just getting started. I just put a camera trap on the same nest a few days ago, so I get to see what they do this year.

Go ahead and look that up and have a few nightmares. I’ve never actually seen a jabiru eat an eel with my own eyes, but if you are a member of a few hundred social media bird groups like I am, you will have been treated to a ton of pictures of jabirus with eels twisted all around their beaks fighting the good fight to not become dinner.

My new favorite jabiru moment happened in a rice field on a huge farm south of Liberia last year. I saw a jabiru flinging something around in the distance. Whatever it was, it was picking up, flicking it around a little and dropping it back on the ground again.

I got my handy truck binoculars and saw that the food item it was playing with was a giant dead rat. Just as I thought ‘there’s no way that thing’s going to hork down an entire giant dead rat,’ it wolfed it down whole. Effective pest management for the farm, I guess.

Jabiru storks are big and kind of prehistoric-looking, but definitely awesome. Enjoy a few camera trap videos of the eggless pair on their nest.

Previous article
Google Announces 12,000 Job Cuts Around the World
Next article
Costa Rica Culture: A Story about the Day of the Devils