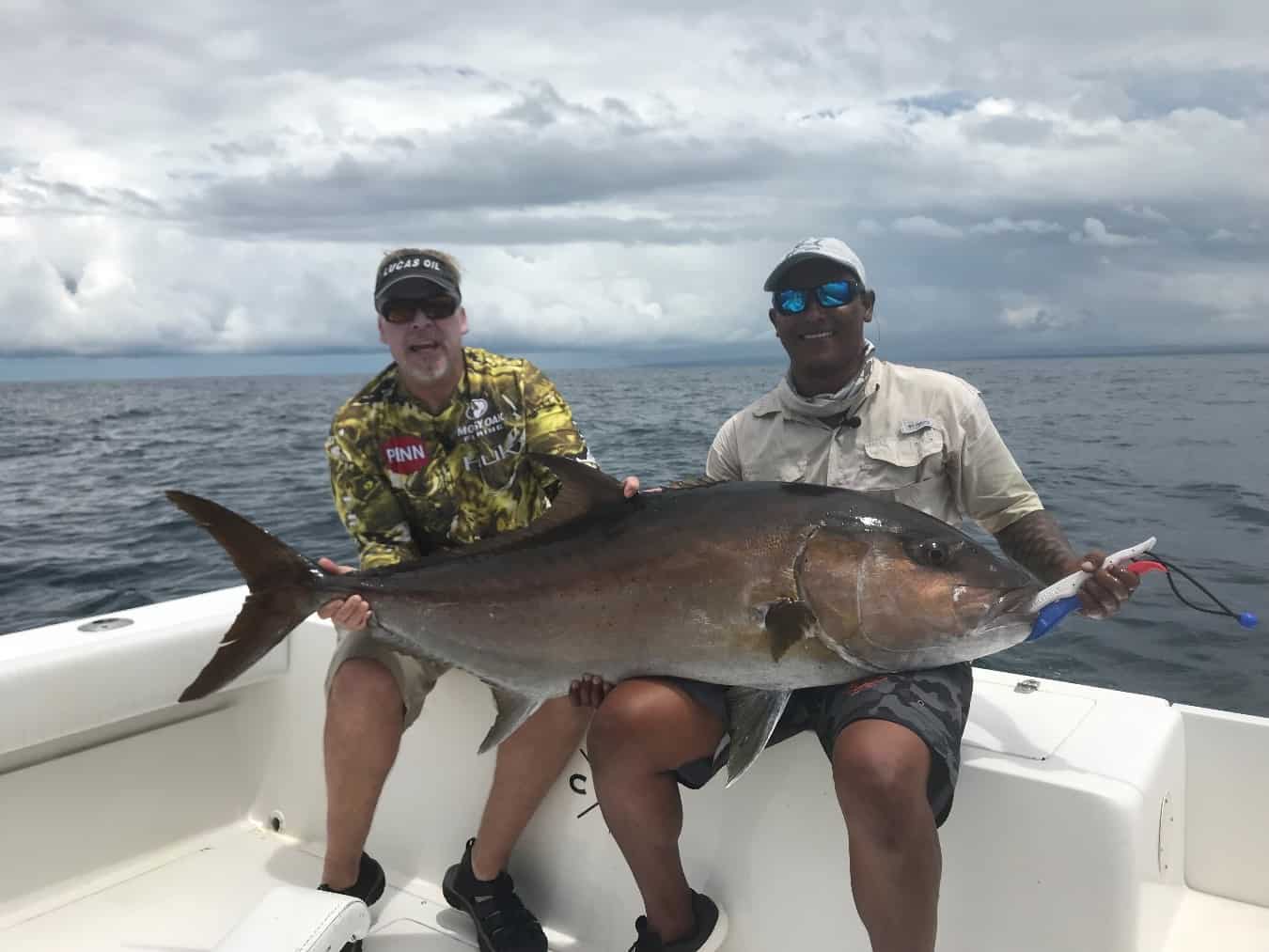 The volcanic reefs off the coast of Costa Rica remind me of a haunted house. They are dark with all kinds of nooks, crannies, and pinnacles to hide in, or seek a quick escape. There could be a monster around every corner sitting at an ambush point. Grouper hang close to the bottom. A variety of snapper and big Almaco jacks cruise just above them patrolling the water column.

African Pompano and Bluefin trevally are mixed with them. Above all that large schools of jack crevalle and barracuda circle like a wagon train waiting for a school of bonito or other baitfish to arrive.

Mark Davis has a knack for fooling these monsters. He needs to. As host of one of the most popular fishing shows on television, Big Water Adventures, he is expected to produce. He rarely lets his audience down. Starting his 15th season, Davis is a survivor in a tough industry.

And unlike some who carry an entourage of many people to produce their shows, Davis does it with himself, and one cameraman. He must be doing something right as he, and Big Water Adventures has won 52 awards for his television show over the years.

Davis fishes from British Columbia to Panama producing his program and Costa Rica, especially the Golfo Dulce area has become a favorite and an annual stop for a dozen years. “There are just so many opportunities here,” remarked Davis. He mentioned the big 4 offshore, marlin, sailfish, tuna, and dorado.

Then there is the massive area to fish for roosterfish. “The advances in fishing tackle and braided line over the years now allows anglers to drop jigs to the depths with fairly light tackle,” he explained. “I can film here three seasons, and not do the same thing twice.” His Costa Rica episodes have grown so popular he now films twice a year here. He has also grown so fond of the area, he and his family purchased a unit in the new Hilton Botanika project in Puerto Jimenez and will become a part time resident of Costa Rica..

Davis is one the best anglers I have had the pleasure to meet and fish with. He is surely headed to the fishing Hall of Fame one day. He uses underwater cameras with a skill that gives the audience the adrenalin rush as if the fish was hooked to their own line. He always seems to produce a bucket list fish on film that keeps his show one of the highest rated fishing programs. His secret…Preparation.

“90 percent of my success is preparation,” Davis explained. He spends his first day at every site he travels to just getting his gear ready. He uses all Penn tackle and will have up to a dozen rods ready, depending what he is fishing for. All will have fresh line, splices and knots meticulously tied, reel drags set, and hook points filed zazor-sharp.

Costa Rica’s volcanic structure is like an underwater Jurassic Park. When jig fishing Davis makes sure he is well aware of the terrain below. Either by studying the bottom machine as the make a pass over and area before fishing or by being in constant contact with the captain as of the conditions below.

With tall pinnacles and jagged terrain, he has to beef up his gear a little. If it is just an area of flat scattered rock, he can lighten up his gear. His personal choice is Halco slow pitch jigs.  The fish finder will also tell what depth the fish are hanging.

Davis always seems to fool large fish, but has no interest in taking a big fish back to the dock. He would rather put a 50 lb snapper back in the water and take a 5 pound snapper for dinner. He has designed a tool to insure the safe return to the depths of big fish.

They will react to changes in water pressure has they are brought to the surface from a couple of hundred feet below. He attaches a heavy weight connected to a camera to the fish and slowly sends it back to the bottom. You can actually see on film as the fish recovers from the pressure change. Much like a diver recovering from the bends. When he feels the fish start to kick its tail, a quick tug on the line releases the fish and he is left with a great release shot for his show.

Years ago, there was a line-up of fishing shows broadcast in Costa Rica, but soccer eventually won out. Big Water Adventures is currently broadcast on the Outdoor Channel and can been seen with other fishing programs at www.myoutdoortv.com. For those who do not have the Outdoor channel on their cable service.

Many people coming for a fishing vacation in Costa Rica target the big blue-water gamefish. Spend one day close to shore. Chase roosterfish or do the jig dance yourself. You will be glad you did.