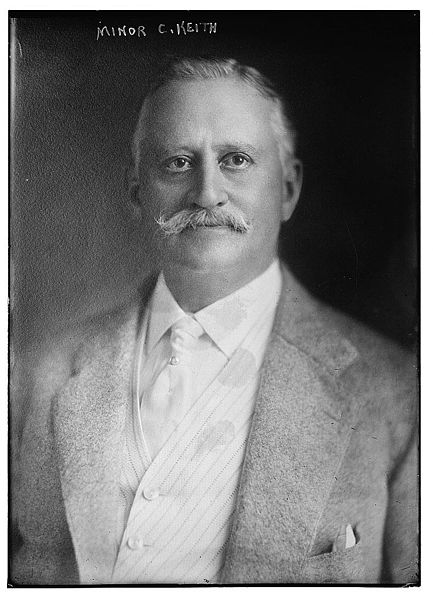 In 1848 Minor Cooper Keith was born in Brooklyn New York, fathered by a successful lumber merchant while his mother’s side had ties to the railroad business, there was drive and determination within his blood. Privately educated throughout his school years, he then was given the opportunity to manage a Texan cattle ranch. However, his future would take a dramatic turn in 1871 when a new opportunity was presented to him by his uncle Henry Meiggs, to join him in constructing a railroad through the jungles of Costa Rica.

His life would then drastically change from the cattle ranch of Texas to the rugged terrains and rainforests of Costa Rica when he accepted this invitation. Accompanied by his two brothers, they were off to embark on a new journey setting their sights on their new mission. Their uncle Henry Meiggs was well known for his accomplishments of building railroads in the difficult terrains of the Chilean Andes and Peru and the Costa Rican government saw him fit for their contract.

The country was facing a dilemma, they were in need of exporting their coffee, and the method of oxcart through the country to the Puntarenas port followed by a much longer than needed route by ship was proving to be much too slow and not generating the profit they wanted. They were after a railroad connecting the Central Valley and San Jose to the Caribbean Coast’s port of Limon.

However, this was far from an easy task as there was minimal development, and they needed to carve through the dense rainforest. The route came with obstacles with the Costa Rican landscape of mountains and rivers and of course the weather. Another environmental obstacle was the coastal Caribbean weather, Costa Rica comes with hot tropical climates and torrential rains.

Laborers were from the country and were acclimated to the environment however, days were long and grueling regardless if you were accustomed to this or not. Then you have the combination of tropical diseases of malaria, yellow fever, and dysentery in addition to the struggles of access to fresh water and food. The people could not continue and chose not to continue, it just was not worth their life.

With work at a halt and in need of laborers, Keith Minor was resourceful and outsourced workers from China and Europe. He returned home to the United States and attracted Italian immigrants in the thousands to come to help him on the railroad with promises of plenty of work and money.

However, when the work started up again, the same cycle began, just with a new group of laborers.  The deaths, the diseases, infected wounds and even just simply running away after having to endure the horrific conditions. They were far from accustomed to the humid heat and the heavy rains and extremely difficult labor of literally having to cut down a thick jungle. At one point the desperation for workers led him to source laborers from the jails of New Orleans in the United States, 700 criminals became part of the crew.  But out of these 700 convicts, it is said only 25 survived the punishing environment.

People began dying in the thousands up to 4,000 people died just within the first 25 miles of construction, included in this count were Keith’s brothers. Even the man that brought him here, changing the trajectory of his career, his uncle Henry Meiggs, died during this time in 1877 leading Keith Minor to take over.

He turned to the people of Jamaica as his next resource, they were familiar with the tropical climate and would be able to withstand the high temperatures and humidity that came along with Costa Rica. He needed to be able to feed his workers so he used the land along the railroad and planted bananas, a cheap and easy food source.

Deal of the Century

As the railroad finally progressed through the years, another new obstacle emerged in 1882 and it was that of the finances, money was running out and Costa Rica’s government defaulted as a result of their own financial struggles. But Keith Minor had put a lot into this project and was not one to give up after everything that they had gone through. He ventured to England and was able to get a very sizeable loan, returning then to the Costa Rica government.

He was in a position of knowing they needed the railroad finished for their exportation of their grains of gold, their coffee and thus put his entrepreneurial skills to good use. He made a proposition, that he would build the railroad for free but with conditions, a 99-year lease allowing him to operate the railroad, control of Limon’s port as well as 800,000 acres tax-free all along the railroad. It was agreed.

In 1890, the long-awaited railroad was finished, there was a route from San Jose to Limon. But income was not being generated as expected on this jungle train from the passengers and coffee exportation. He experimented with his readily available resource, bananas once used to feed his workers, lining the routes of the railroad could now potentially become his new source of income. Running them through the railcars off on steamboat through the port to New Orleans, proved to be a success. His new venture, the Tropical Trading and Transport Company was created and the train was being used solely for his banana business.

With the help of Andrew Preston and Boston Fruit Company, bananas were gaining popularity in the United States, although his competitor, it helped gain momentum for his new export. Not only were they being shipped to the United States through the help of Panama but he was doing business in Colombia and trading in stores along the coasts of Costa Rica. As well his position in society had increased as he became more influential, marrying the daughter of a former president. Tropical Trading and Transport Company was taking over the banana business throughout Central America.

But as history repeats itself, obstacles eventually returned. As much as the Costa Rican government and others tried to help him, his financial woes were still upon him. He decided to reach out to someone in the business who knew best, Boston Fruit Company. It was then on March 30th, 1899 that the United Fruit Company was established, a joining of the two companies.

The two companies were able to merge together to create one dynamic banana company, Andrew Preston as the president and Keith Minor as vice president. They played to each other’s strengths focusing on what they know best. Andrew Preston created the demand with the public through his creative marketing strategies and Keith Minor worked on leaning out the production, improving the process all the while being able to cover a wide area of territory. The United Fruit Company continued to progress establishing banana plantations in Guatemala extending its coverage throughout Central America.

In 1929 Keith Cooper Minor passed away leaving behind a controversial yet influential legacy that played a major role in the economy of Costa Rica and of its history and culture. With so many enduring years of intense effort, deaths, sweat, and money such a grand venture can be quickly ripped away as it was on April 22, 1991. Nature took its turn significantly damaging the rail lines, with a strong earthquake in the province of Limon, yet another obstacle in the tale of the train from San Jose to Limon.