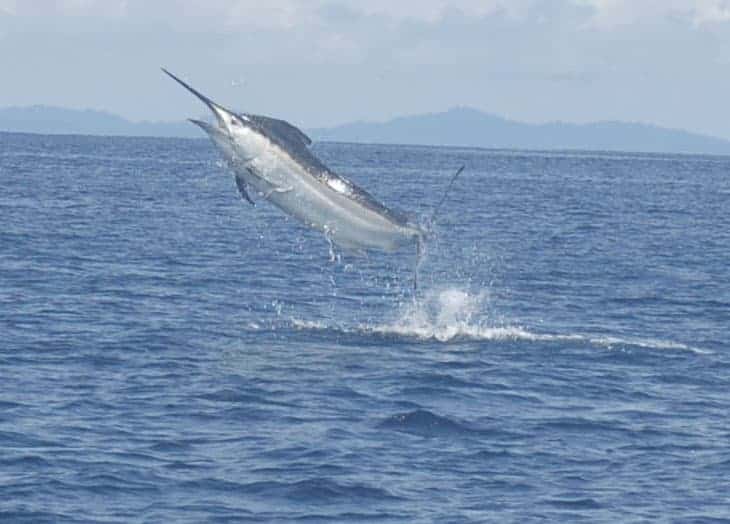 Rumors and uncertainty are running rabid in the sport fishing community after a list of endangered or threatened species was published in the Gaceta, the government´s official publication to notify its citizens by SINAC, the National Systems of Conservation Areas. Included in the list was several types of sharks, sea turtles, marine mammals, sea birds and several fish including toadfish, gobi, Goliath grouper, big eye tuna, tarpon and blue marlin.

What exactly does this mean?

No-one is quite sure but speculation runs wild. Dozens of letters were written to various government organizations by different sport fishing groups asking for an explanation. The main concern was about tarpon, an Atlantic species, although a small population has set up camp in the Pacific by crossing the Panama Canal, and blue marlin which lives in both the Atlantic and Pacific.

Both species are of great importance to the sport fishing industry. To many people, it doesn´t make sense for Costa Rica to add it to the list.

Maybe somewhere the populations of tarpon are down but Costa Rica has long been considered one of the top places in the world to fish for them. They have no commercial value and sport fishermen release them by custom and by law. It is still common to get as many as 30 bites a day.

Captain Eddie Brown has been a tarpon guide out of Barra del Colorado and Tortuguero for 54 years. “In the beginning there were three fishing lodges that employed many local people. Because of the isolation of the Caribbean coast there were not many opportunities except to farm, fish commercially or fish tourists for tarpon. We have always practiced catch and release and the tarpon populations are still strong,” he explained.

Historically SINAC and MINAE have governed wildlife, National Parks, and Marine Protected Areas. INCOPESCA has governed Costa Rica’s fisheries. Both have their critics.

After a week or so of speculation the government agencies started answering the inquiries about tarpon and blue marlin. The announcement in the Gaceta was of declaratory not regulatory nature  explained SINAC. The sport fishing community breathed a sigh of relief. Though it may only be short lived.

Congressman Jose Maria Villalta has introduced a proposed law change in Expedient 21.754. The change is to paragraph 4 in Article 1 of the Wildlife Conservation Law 7317, which reads: This law shall not apply to species of fishing or aquaculture interest, the specific regulation of which is established in Law 7384 and Law 8346, and whose competence as executing entity corresponds to INCOPESCA.

The proposed law has a ton of support because it would protect sharks which have long been exploited by domestic and foreign fishermen. Sport Fishermen have little interest in catching sharks and I have never known a tourist fishing operation in Costa Rica that promoted shark fishing. But losing the ability to fish catch and release for tarpon and blue marlin would be devastating to coastal tourism.

Article 50 of the Political Constitution recognizes the right to a healthy and ecologically balanced environment, being that this right includes the conservation, use and sustainable management of biodiversity and the fair and equitable distribution of benefits derived from it, ensuring the greatest participation of all citizens.

Being wildlife an element of biodiversity, which is a priority and substantive, its importance is unquestionable, due to its intrinsic value and its contributions to achieve a healthy and ecologically balanced environment, as well as its fundamental role in the economy and development of this country.

Pre-Covid, sport fishing was bringing in $520 million a year to the Costa Rican economy and supplying thousands of direct and indirect jobs in the tourist fishing industry. With the United States starting to open up, more and more tourists are beginning to return to Costa Rica.

I only have the perspective of a fisherman who has spent 30 years on the water here, so I asked some friends a lot smarter than I in science and statistics to help me better understand Billfish in Costa Rica and how much of it is caught every year by the different sectors. Billfish includes marlins, swordfish, and sailfish. What I found is very confusing, filled with either intentional or non-intentional loopholes in regulations or very little transparency. All is public record.

When the species billfish, sailfish (Istiophorus platypterus), pink marlin (Tetrapturus audax), pink marlin, (Tetrapturus audax), white marlin (Makaira nigricans), swordfish (Xiphias gladius) are caught by sport and tourist fishermen and the fish is still alive This will be released by cutting the line or line as close as possible to the hook, without removing the captured specimen from the water.

When sailfish are caught incidentally by the commercial fleet except the tourist fleet and it is still alive, it will be released by cutting the line or the line as close as possible to the hook, without removing the specimen from the water. All billfish must be released by sport fishermen but only sailfish and not marlin are required to be released by commercial fleet. INCOPESCA allows up to 15% of their catch to be incidental catch of sailfish. According to the most recent record, 348 tons of sailfish were dead on commercial lines in 2018 and brought in to market.

There are no complete records of catch and release in the sport fishing community as not all boats keep records, although some keep extensive records. Data compiled before and after the tuna boat zoning in 2014 show an increase in sport fishing catches in dorado, tuna, marlin, but not sailfish after the zoning suggesting that overfishing of sailfish by the commercial fleet is common.

The Guy Harvey Research Institute conducted catch and release studies on sailfish in Panama. By attaching a camera to the fish they counted the number of tail strokes after release. What they found is the survival rate was higher than previously estimated when the fish is handled correctly, left in the water, not pulling it onboard for a picture before release.

Longline Fishing and billfish: Landings of Billfish in Pacific Costa Rica, 2010 to 2018 in tons as reported by INCOPESCA.  **Black and Blue marlin added in 2017

On top of all this some of the scientific names are wrong. This is partially from science merging the Atlantic and Pacific blue marlin as well as the sailfish into the same scientific category when before they were separate and others have just been always wrong. Even the Minister of Economy and Minister of Agriculture’s regulation regarding the labeling of fresh, frozen, thawed or prepackaged Technical Regulation for Labeling has errors in the names given to billfish products.

In Costa Rica on the Caribbean side you will find Atlantic Blue marlin, sailfish, and white marlin. On the Pacific side, Pacific blue marlin, black marlin, striped marlin and sailfish. My guess in the landing reports, what is reported as white marlin is most likely mostly blue and a few black marlin and pink marlin is striped marlin. They never had a category for blue or black marlin before 2017 and certainly didn´t report landing very much since then. The most common marlin caught in Costa Rica is the Pacific blue marlin. What also stands out is amount of swordfish landings in Costa Rica.

Bycatch in the tuna industry

Billfish, sharks, turtles, marine mammals, and other sport fish fall victims every year to foreign tuna purse seiners. Zoning the Pacific Ocean in 2014, while moving tuna boats out 45 miles seems to have made a difference in not only the number of bycatch but also the production of tuna. In the last five years before the zoning there was an average of 26.7 tons of billfish that died yearly in tuna nets.

In five years since the zoning that number has dropped to an average of 10.3 tons a year and their production climbed to nearly 20 tons of tuna per net set. Zoning works. It seems the congress is stuck on moving the foreign tuna boats out to 80 miles in the new tuna reform law but at least 100 miles would make much more sense to the benefit of National fishermen.

Although the intention of Villalta’s proposed law change is protection for sharks, blue marlin and tarpon are clumped in the mix. SINAC and MINAE have a history of “no touch” conservation. I believe the feeling is if no-one can touch it, it is easier to control. The opposite is true. Honest people follow the rules but illegal fishermen take advantage of the lack of enforcement. Illegal fishing in National Parks is a perfect example.

Swordfish landings have more than doubled since 2010 and in 2018 were 400 tons more than all marlins landed combined. This coincides with the ban on importation of billfish into the United States except for swordfish. Being that longlining is a non-select type of fishing, the numbers look suspect.

Several government agencies need to get on the same page as to fish identification. This includes, INCOPESCA, Minister of Economy, and Minister of Agriculture, as well as the exporters of fish products so there is transparency in fish products.

There is a lot that needs done, but banning blue marlin and tarpon in the catch and release economy of tourism is not one of them.