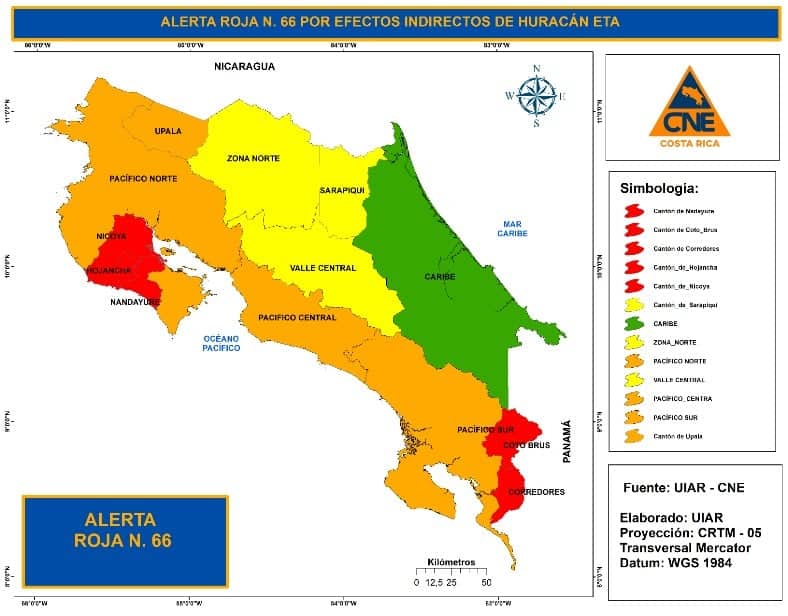 Map of Yellow, Orange and Red Alerts in Costa Rica associated with Hurricane Eta on November 4, 2020. (Via CNE.)

The Red Alert reads as follows:

“Due to the saturation of the soils, the level of damage and the continuation of the rains during this night and early in the morning, the CNE is raising to Red Alert five cantons: Nicoya, Nandayure, Hojancha de Guanacaste, and Corredores and Coto Brus of the South Pacific.”

The impact on infrastructure includes damage to fifteen national or local roads, three bridges and the Caño Seco river dam at Ciudad Neily. Some communities are without electricity.

During a red alert, all emergency and humanitarian response teams are activated. This often accompanies an evacuation of the public to shelters and is followed by an evaluation of damage to infrastructure.

Residents of the cantons under a Red Alert should heed instructions from their municipal government, police, firefighters and other first responders.

In coordination with the Red Alert, President Carlos Alvarado announced that “technical-operational personnel have already been mobilized to the most affected areas.”

Costa Rica’s Pacific — particularly Guanacaste and the Southern Zone — have experienced heavy rains over the past 48 hours as an indirect effect of Tropical Storm Eta, which made landfall in Nicaragua on Tuesday.

Over the past three days, some areas of Guanacaste have doubled their average rainfall for the entire month of November.

Local reports from the cantons under a Red Alert include:

At least 69 landslides have been reported across Costa Rica, and 64 communities are experiencing adverse effects related to the weather. Drivers should avoid non-emergency travel through Orange and Red Alert zones, as road conditions are poor.

Rainfall is expected to continue Thursday throughout the Pacific, and through Friday in Guanacaste, according to the National Meteorological Institute (IMN).

Dial 9-1-1 in the event of an emergency in Costa Rica. English-speaking operators are available.