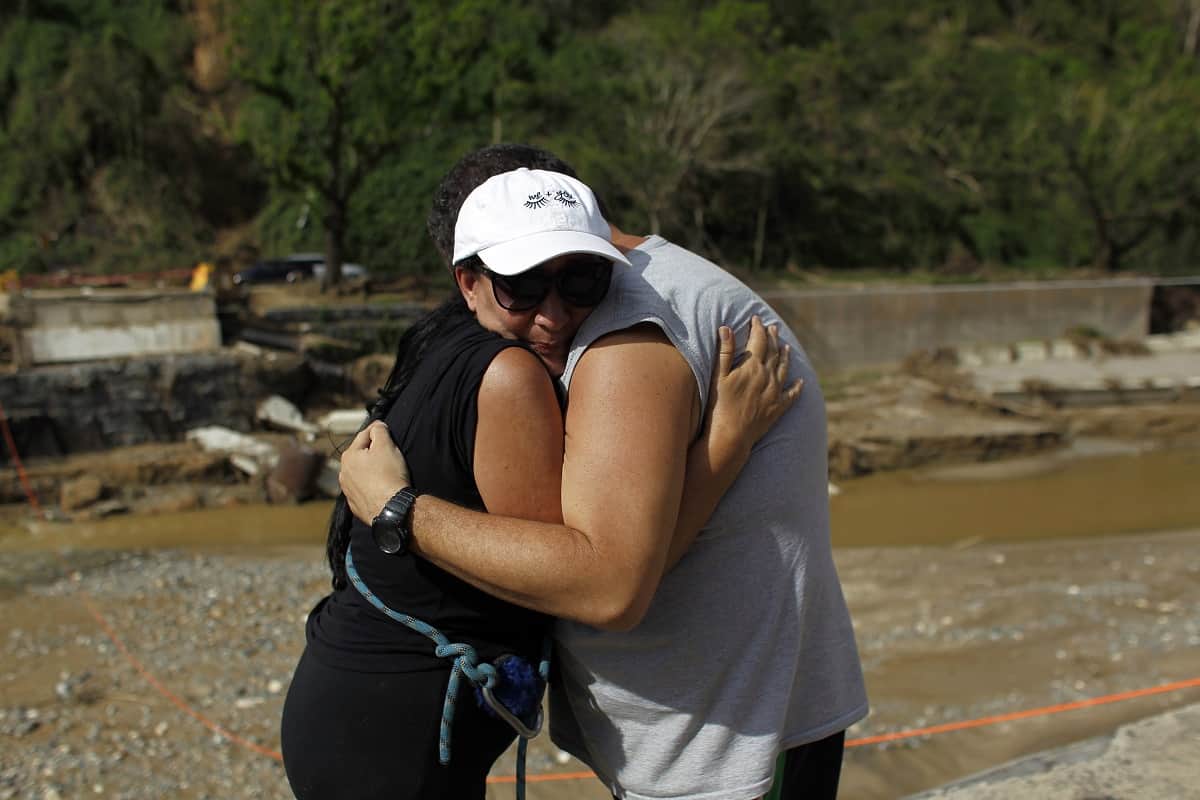 Samuel De Jesús and his aunt Nilda Díaz embrace on Oct. 17 after not having seen each other since before the passage of Hurricane María in September. In their community, Río Abajo de Utuado, the only access bridge was washed out by the storm. (AFP Photo / Ricardo Arduengo)

Not having electricity is the new normal.

Reading with a light that straps on to your head coal-miner style is the new normal.

The grinding sounds of generators competing with the iconic song of the coqui frog in the night is the new normal. Residents form a human chain to load supplies to a truck at the Rio Abajo community in Utuado on Oct. 17. AFP Photo / Ricardo Arduengo

Negotiating intersections without stoplights is the new normal. This shopping cart and improvised pulley system is the only way for the community of Utuado to obtain supplies ever since the passage of Hurricane Maria caused the river to wash away the only bridge that gives access to the neighborhood. AFP Photo / Ricardo Arduengo

Seeing military people and off-island federal agents of all stripes, Homeland Security, the Forestry Service, the Public Health Service, the National Park Service, Federal Emergency Management Agency. the Environmental Protection Agency (to name a few) by the score to help in the recovery effort is the new normal. This US Navy photo released on Oct. 7 shows an MH-53E Sea Dragon from the "Vanguard" of Helicopter Mine Countermeasures Squadron (HM) 14 embarking aboard the amphibious assault ship USS Wasp (LHD 1), as it prepares to transport concrete barriers to help repair the Guajataca Dam in Quebradillas, Puerto Rico. AFP Photo / US Navy / Levingston Lewis / Handout

In these towns, the new normal is more frightening. This photo from Sept. 24 shows the extent of the initial damage in Toa Alta, west of San Juan. AFP Photo / Ricardo Arduengo

Some have lost all to the hurricane that took their houses, their belongings, leaving them with the clothes on their backs.

For 44 percent of the people, not having water is the new normal. For them, filling up water bottles and other containers at oases or worse yet, drinking and bathing from contaminated streams is the new normal.

With no access to potable water and so many waste water treatment plants put out of service by the storm, infectious diseases like leptospirosis are knocking at the door. Javier walks on his house next to an image of La Virgen de Guadalupe and a placard that reads in Spanish, "Voy a ti (I'm coming to you) Puerto Rico," in Yabucoa, in the eastern part of Puerto Rico, on Sept. 28, 2017. Puerto Rico braced for potentially calamitous flash flooding after being pummeled by Hurricane Maria, which devastated the island and knocked out the entire electricity grid. AFP Photo / Hector Retamal

John McPhaul is a dual U.S.-Costa Rican citizen, born in San José. He wrote for The Tico Times for many years and now works at the San Juan Daily Star.