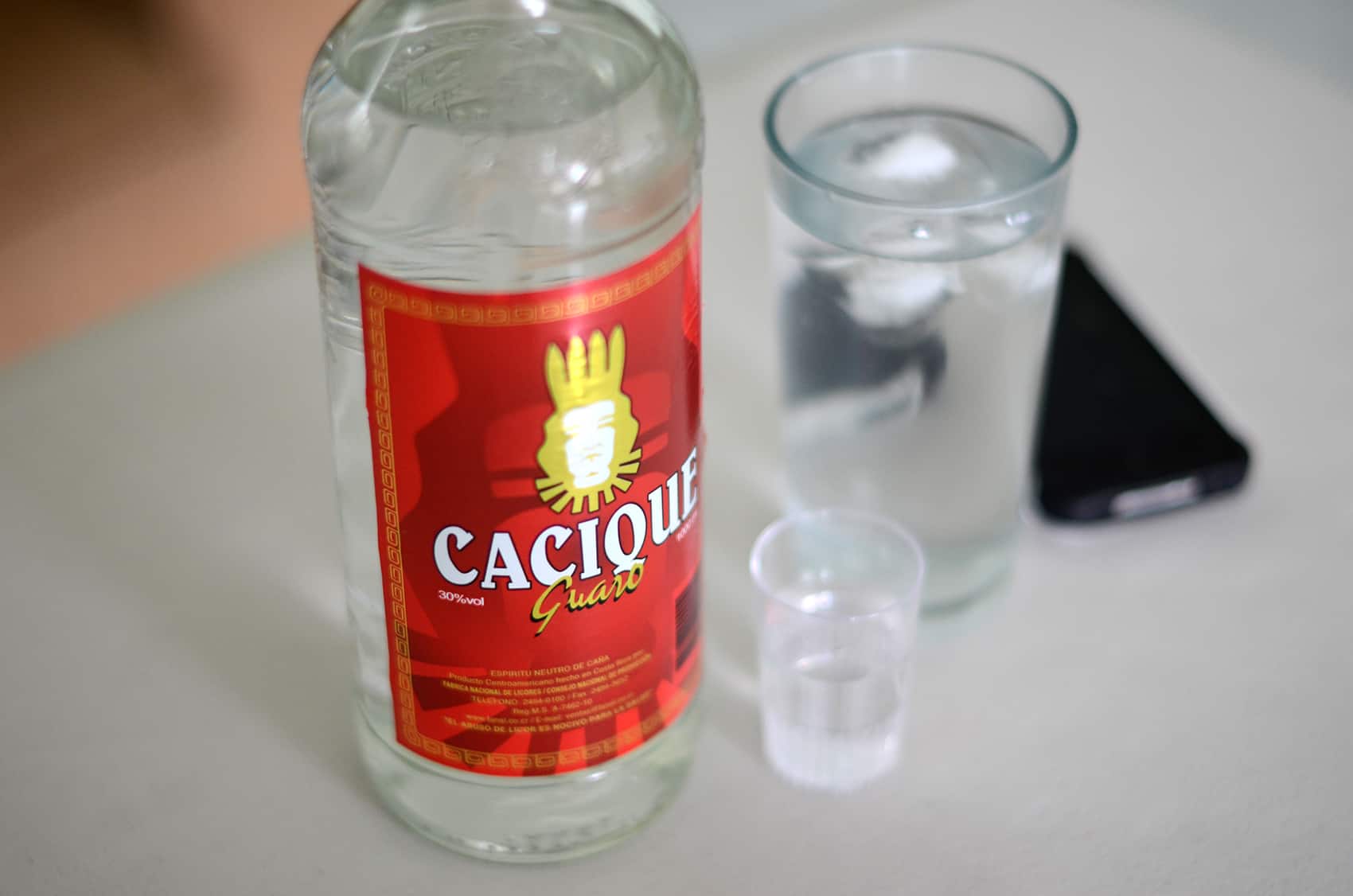 A tapis of guaro to blow your hair back. (Alberto Font/The Tico Times)

It was blue when it showed up. I mean, really blue.

I was on my first trip to Costa Rica and I wanted to try something local, something I could only get here. So I ordered the only cocktail with guaro, the country’s ubiquitous cane-based liquor, that I saw on the poolside bar menu.

Surely Río Celeste inspired the bartender when he glugged a healthy amount of blue curaçao into the glass, mixed with guaro and served it on ice. The flavor was sickly sweet and forgettable. It would be six years before I tried guaro again.

From then on I saw guaro as a get-drunk-quick alcohol. Something young people drank until they knew better or had drunk for too many years to stop themselves. After I moved here, I’d walk down San José’s streets and cluck my tongue at the empty half-pint plastic bottles in the gutter, the face of the Cacique-brand chieftain squinting up at me from the label with the telltale expression of “I am never drinking again.”

But of course, almost everyone drinks again, and the same went for me. I was on a reporting trip in Guanacaste and dropped by the then-newly opened Mangroove Hotel in Playa Panama to try their restaurant. Waiting for a table, I saddled up to the bar — not quite poolside but close — and made small talk with Elizabeth Furlong, a Canadian mixologist who was overseeing the bar’s new drink menu.

There, under the stars and with the ocean waves crashing in the distance, she served me what I can only describe as the most transcendent chiliguaro in Costa Rica.

For those who did not study abroad in Costa Rica, the chiliguaro shot has become the most popular way to drink guaro here. Depending on where you go, it’s a mixture of guaro, Tabasco hot pepper sauce and, well, that’s usually what it ends up being. Maybe some lime juice in there, too.

But this chiliguaro was different. The drink had a smooth texture from a base of pureed tomato, a kick from a chile panameño (similar to a habanero pepper) and a dash of pickle brine. A whiff of the volatile guaro came through as a pleasant reminder of alcohol. Spicy smoked salt garnished the rim of the glass, where a gherkin pickle lounged. Down the hatch. This was a far cry from the syrupy cocktail I was served all those years ago or the shots served in San José dive bars as a courtesy accompaniment to a beer. Guaro suddenly had potential that I’d never imagined. At a time when a booming craft beer scene has made Costa Rica a regional leader in artisanal brewing, guaro could be poised to be Tiquicia’s next big drink trend.

Guaro is a spirit made from fermented sugarcane known as aguardiente, literally “water that burns.” Unlike rum, which is typically aged for a year, guaro is ready to drink as soon as it’s been distilled and mixed with water. It is clear, slightly sweet and doesn’t have a strong flavor on its own.

When I told a Costa Rican friend I was getting interested in guaro he pointed out that the National Liquor Factory, FANAL, which distills and bottles the most popular guaro brand, Cacique, also makes rubbing alcohol. Considering my prejudice against guaro at the time, this wasn’t a reassuring fact. But I decided to go out on a recent, hot morning to Grecia, Alajuela, where the factory is located, to see for myself.

The Cacique chieftain looks over the FANAL campus from his perch on top of the factory’s distillation tower. Walking around the factory’s lawns lined with mango trees, FANAL production coordinator Ronald Arias told me how the spirit is made.

Sugarcane from Guanacaste is collected and fermented before it’s trucked to FANAL’s factory. The fermented sugarcane liquid, called the wash, is heated by steam in a series of column stills. Arias said the distillation process results in a 96 percent alcohol solution before it’s mixed with water and bottled.

Guaro bottled here ranges between 30 and 35 percent alcohol by volume or 70 proof. That’s less than whiskey (80 proof) and rum (80-100 proof). So while alcoholic enough to get someone smashed, guaro wasn’t the rotgut I had assumed it to be.

Watch a video of guaro being made at Costa Rica’s National Liquor Factory:

Still, it turns out the rumor was true: FANAL does make rubbing alcohol and alcohol for medical use. In fact, all the alcohol-based disinfectant gels and cleaners used in public hospitals are made by the factory.

One of those alcohol-based hand washes stood on the desk of FANAL General Manager Álvaro Salas. He sat across from me at a large wooden desk in his office at the factory. Since Salas took over FANAL operations two years ago he has been looking to grow the company’s business, especially abroad.

FANAL recently started exporting Cacique again after a rough patch. Years ago, the state-owned business exported guaro to neighboring countries only to see it smuggled back over the border as contraband, Salas said. But now the company sends its aguardiente around the world: Russia, China, Brazil, Colombia, Ecuador and Canada.

Salas is hoping shoppers who have been to Costa Rica will see guaro for sale and make the connection between their trip and the spirit. A kind of nostalgia sales strategy. It’s not a crazy idea. Costa Rica’s iconic beer Imperial has been for sale in the U.S. for years now attracting the same former tourists.

“The Tourism Minister is calling for a national drink,” Salas said. “There’s no need. There’s Cacique!”

It’s hard to argue with him there. People have been making guaro in Costa Rica long before President Juan Rafael Mora Porras signed an order centralizing liquor production in Costa Rica in 1850. In 1853, FANAL opened its doors with the mandate to provide Ticos with guaro that was safe to drink, namely ensuring it doesn’t have high levels of methanol, which can blind the clients of a careless moonshiner.

Noble as that mandate was, nationalization probably had a fair bit to do with capturing tax revenues from liquor, too.

FANAL maintains a monopoly on the production of guaro and other spirits to this day. If another company wants to produce liquor in Costa Rica, it needs to apply for a concession from the company.

But strict controls over who can distill guaro might be holding back the spirit’s potential to attract a bigger or more affluent demographic.

Cacique is FANAL’s biggest seller, though the company is trying to diversify. Salas slid over a brochure of different kinds of products FANAL makes: creme de menthe, gin, rum, and a variety of flavored guaro, like mango.

Soon, a version of the chiliguaro cocktail bottled under the name “Picantico” will be on shelves here. (“Chiliguaro” was already trademarked in Costa Rica in 2013.)

There are differing ideas, though, about how guaro could grow its market and convert skeptical consumers like me.

Elizabeth Furlong, the mixologist who first turned me on to the possibilities of Cacique with her souped-up chiliguaro, told me one afternoon at her San José restaurant, Maza, that rum is poised to be the “next big thing” in the spirits industry.

Like mezcal, which followed tequila into the spotlight, maybe guaro could ride rum’s coattails into cocktail bars around the world.

Furlong thinks there is potential for guaro to attract an upscale market if someone can tell a good story about it and produce a high quality product. She sees parallels between guaro and the Brazilian aguardiente, cachaça.

“There was a trend a while back where people were making premium cachaça,” she said. “People were seeking it out in bars because it was an interesting ingredient. If people tried to do something like that with Cacique, I think consumers would definitely be into it.”

FANAL does make Cacique Superior, which it bills as a top-shelf guaro. But because of the company’s monopoly there hasn’t been much in the way of experimentation with how guaro is made. FANAL’s Arias told me the company was toying with the idea of a guaro reposado, which would be aged for a certain period of time, but there is no set production date.

Furlong said she’d be interested to see what a small-batch guaro producer could do. But the strict controls on distilling liquor here limit the commercial potential of artisanal guaro. That’s not to say it’s impossible, though.

Still, before guaro can become a trendy spirit, Costa Ricans are going to have to give it a fresh approach. Furlong said many of the bartenders she’s encountered here forgo guaro for vodka or other imported spirits because of its lowbrow reputation.

She pointed out that whiskey was once equally derided in the U.S. as an unsophisticated drink for the masses. Today, bourbon and other whiskeys are a multi-billion-dollar industry with connoisseurs paying hundreds of dollars for boutique bottles like Pappy Van Winkle.

Guaro has plenty to bring to the table. The spirit’s mild taste allows an enterprising bartender the flexibility to develop depth of flavors or bring in non-traditional flavors to a cocktail.

Take the classic chiliguaro. A version of the shot Furlong developed for the San José restaurant Alma de Amón infuses guaro with rosemary and black peppercorns before combining it with tomato juice and lime.

Behind the bar at Maza, Furlong pulled out a handful of unlabeled glass bottles filled with guaro infusing with spices like cardamon, coffee, cacao and cinnamon. The smell was heavenly.

Furlong admitted there’s not enough demand to charge ₡5,000 for a guaro-based cocktail yet but there’s an advantage to Cacique’s low price point in the meantime.