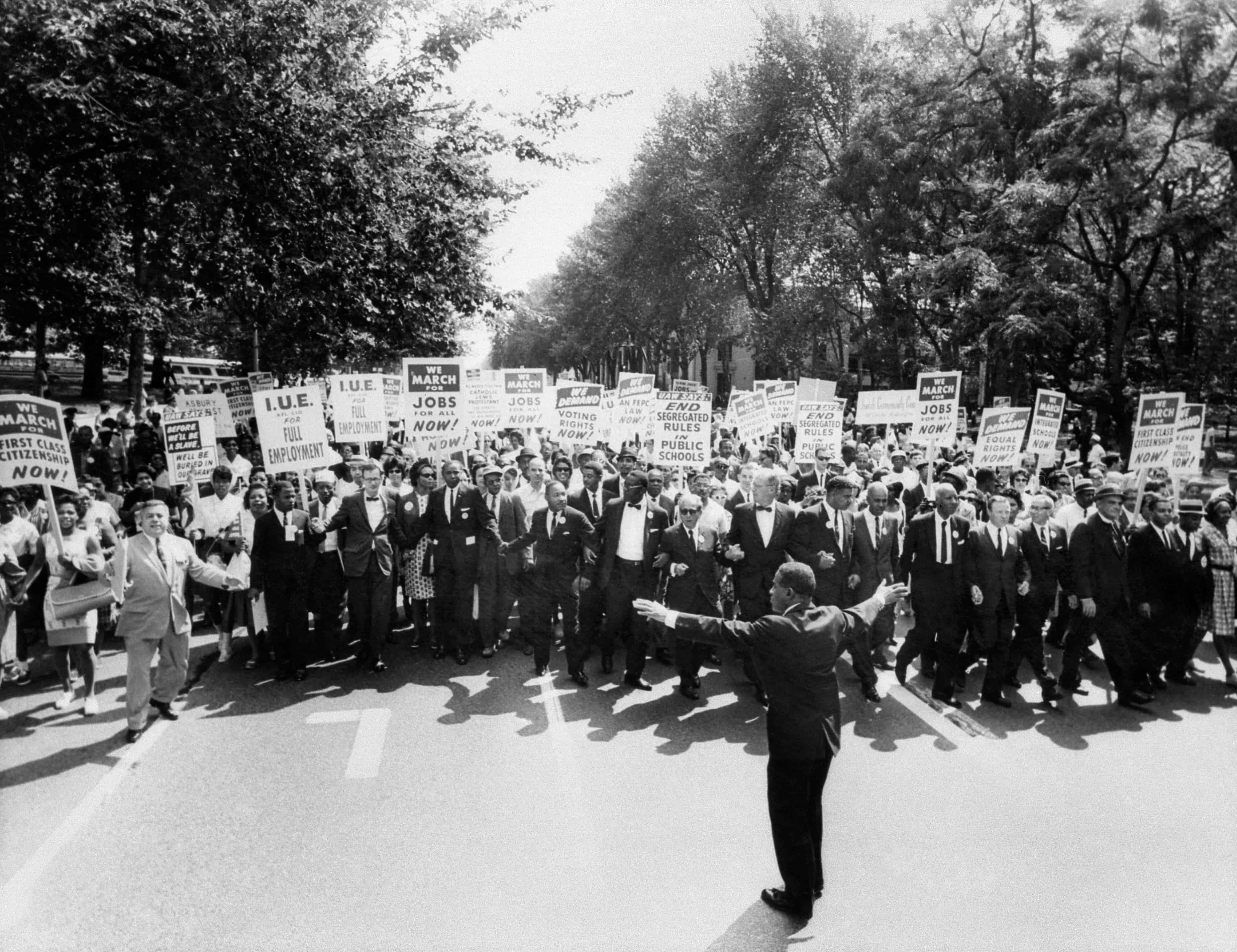 The clergyman and civil rights leader Martin Luther King (center) and other civil right leaders march on August 28, 1963 on the Washington D.C. Mall during the "March on Washington." (Inconnu/AFP)

The Rev. Martin Luther King Jr. is a historical figure every U.S. school child knows, one of the few from American history sculpted into a monument on the Mall. Yet much of his activism is misunderstood, even by some who seek to honor him. In the midst of protests by young African Americans in cities and on campuses across the U.S., King’s life and legacy remain profoundly relevant. On the holiday bearing his name, here are five myths about the civil rights icon.

1. King believed in a color-blind society.

Since his death, King has emerged as a triumphalist figure, used to reassure us that the United States has transcended its history of racial strife. Of all the minister’s powerful oratory, these words from his speech at the Lincoln Memorial in 1963 are some of the most cited: “I have a dream that my four little children will one day live in a nation where they will not be judged by the color of their skin but by the content of their character.” But while this quote is wildly popular, its interpretation varies radically. Conservatives, including Ronald Reagan, have enlisted it to rationalize opposition to diversity programs. In 1990, African American pundit Shelby Steele titled his anti-affirmative-action memoir “The Content of Our Character: A New Vision of Race in America.”

But King knew that the economy wasn’t color-blind, and he believed that the Civil Rights and Voting Rights acts would not eliminate racial disparity. After 1965, King fought against crisis levels of black unemployment in the Watts area of Los Angeles, for open housing in Chicago and in support of striking black sanitation workers in Memphis. At the end of his life, he became particularly disheartened by the racial barriers to housing and jobs in the urban North and West.

King explicitly linked racism to economics in ways that remain sharply relevant. In his view, only direct intervention by a strong federal government could counteract the historical disparities wrought by the overlapping forces of race and class, forces that were unlikely to disappear.

2. King’s dream was to end racism in the South.

In a 1993 survey, more than two-thirds of respondents said “there had been significant progress toward Martin Luther King’s dream of racial equality.” Many biographical sketches of the minister focus on the epic Southern civil rights battles and on the transcendent imagery of his “I Have a Dream” speech. One hour-long documentary airing on CNN devoted 53 minutes to his life prior to the passage of the Civil Rights Act. Largely left out: his work between 1964 and 1968, including the Poor People’s Campaign and antiwar activism.

King had not one dream but many. He placed the fight for African American equality within the larger struggle for international decolonization. After 17 African countries won independence in 1960 alone, King observed in the “Letter From a Birmingham Jail”: “We have waited for more than three hundred and forty years for our constitutional and God-given rights. The nations of Asia and Africa are moving with jet-like speed toward gaining political independence, but we still creep at horse and buggy pace toward gaining a cup of coffee at a lunch counter.”

In 1967, at the Riverside Church in Manhattan, he made an impassioned plea against America’s aggressive anti-communist foreign policy, which had resulted in the deaths of hundreds of thousands of Vietnamese. King denounced the United States as the “greatest purveyor of violence in the world today.” While a sanitized image of King as a Southern civil rights crusader has been enshrined in popular memory, his dream of ending American militarism has proved more difficult to accept.

3. King was the natural antagonist of Malcolm X.

King and Malcolm X are often cast as opposing poles, with the former supporting nonviolent civil disobedience in the South and the latter encouraging angry, armed rebellion in the North. But the icons actually have more in common than one might think.

Both men’s political visions profoundly changed during their lives. Early in his career, King focused on more limited programs of desegregation but later believed a “radical revolution of values” in American society was needed. (One journalist said the year before he died that he “sounded like a nonviolent Malcolm X.”) Malcolm X had a revolution of his own, breaking with the Nation of Islam in 1964 and offering support to King’s campaign in Selma in 1965.

And both men held a deep opposition to the war in Vietnam. King saw it as “a symptom of a far deeper malady within the American spirit” and called for a global revolution against “poverty, racism and militarism.” King’s stance resulted in great personal and political cost. Nearly all of the major newspapers denounced him, and President Lyndon B. Johnson raged against his speech. Never again would he be welcome at the White House. Like Malcolm X, who faced popular outrage for saying “the chickens came home to roost” after the John F. Kennedy assassination, King also bore the pain of national censure and disgrace.

The denatured iconography of King has an unfortunate consequence: Many young people see him and the civil rights generation he personifies as irrelevant to their struggles against police violence and mass incarceration. Ferguson, Missouri, activist Tef Poe expressed this most clearly when he asserted that the new protests “ain’t your grandparents’ civil rights movement.” Poe’s comments reflected how younger protesters have pushed against the politics of respectability associated with King, the NAACP and the Southern Christian Leadership Conference. Ferguson protesters like Poe, along with Black Lives Matter activists, set their resistance apart from what they see as an older, more anemic politics of conciliation. BLM founders Alicia Garza, Patrisse Cullors and Opal Tometi have also critiqued the limitations of hierarchical male leadership models.

Despite these differences, a deeper river of struggle connects civil rights and black power activism to the movement for black lives today. As seen in the Montgomery bus boycott, Bull Connor’s Birmingham and the Selma beatings, local authorities tried to stop political organizing through police and vigilante violence, mass jailings and brutality behind bars. Ferguson protesters, who faced down tanks, tear gas and assorted forms of military-grade hardware, tasted what many activists suffered throughout the 1950s and 1960s. As these examples show, the fight to end the criminalization of black protest, and of black people more broadly, lies at the heart of African American freedom struggles then and now.

In his eulogy for Jimmie Lee Jackson, King denounced the misuse of police powers, which he saw as a direct expression of white supremacy. He understood Jackson’s shooting by a white officer to be symbolic of race-based killings throughout the country. “A state trooper pointed the gun, but he did not act alone,” King said. “He was murdered by the brutality of every sheriff who practices lawlessness in the name of law. He was murdered by the irresponsibility of every politician, from governors on down, who has fed his constituents the stale bread of hatred and the spoiled meat of racism.”

5. Without King, the civil rights movement wouldn’t have happened.

One of the most controversial aspects of Ava DuVernay’s film “Selma” is its rendering of King as the catalytic agent for the Voting Rights Act, at the expense of LBJ. Equally striking, though, is how it reflects the larger cultural tendency to represent the civil rights movement as an example of “great man” history, in which King eclipses other leaders and potential rivals such as Malcolm X and James Forman from the Student Nonviolent Coordinating Committee, who comes off as an erratic hothead.

Hidden even further from view by King hagiography is the work of female civil rights activists, including Ella Baker, Daisy Bates, Joanne Grant, Fannie Lou Hamer and Septima Clark, who helped build the human infrastructure of the movement. Along with many working-class and poor black people whose names we will never know, these women helped launch local campaigns that garnered national publicity and attention. In the words of civil rights scholar Charles Payne, “Men led, but women organized.”

King himself was deeply conflicted about his role as the face of the civil rights movement. In the last speech of his life, he warned his audience, “I may not get there with you, but I want you to know tonight that we, as a people, will get to the promised land.” With these words, King recognized the importance of collective struggle and placed his trust in the hands of present and future generations.

Murch is a professor of history at Rutgers University.