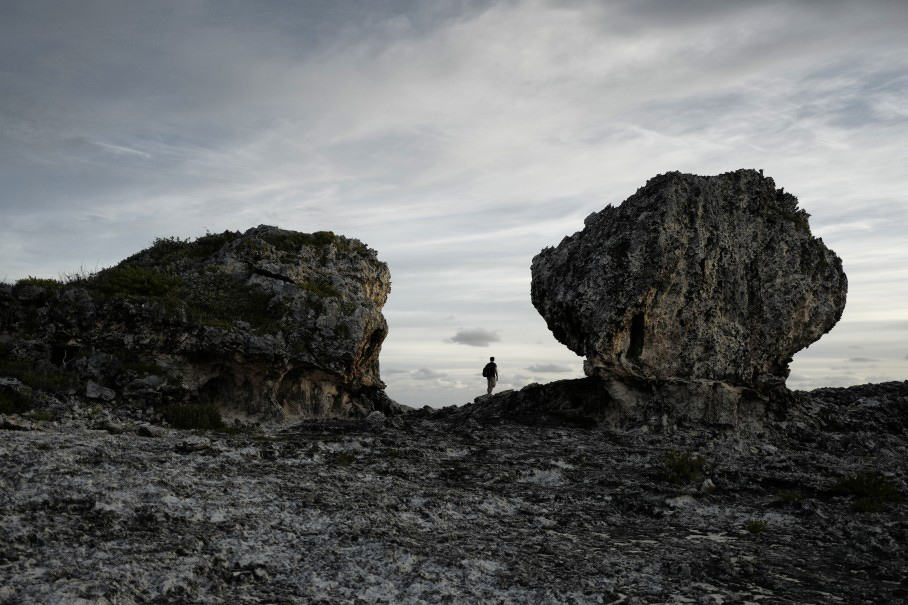 The giant boulders of Eleuthera in the Bahamas have sparked a great debate among scientists about their origin. (Charles Ommanney/The Washington Post)

On Sunday, I reported about a contested but surprisingly serious new idea in the climate debate — the notion that mysterious huge rocks in the Bahamas may be the result of giant storm waves, which lifted them over high cliffs on the island of Eleuthera more than 100,000 years ago.

At first glance, that sentence might lead you to wonder: What does this have to do with climate change?

The answer is that James Hansen, probably the world’s most famous climate scientist, has pointed to the boulders – and more specifically, at the storms that he thinks transported them – as evidence of the kinds of events that might happen again if we continue heating the planet. In this he is drawing substantially on the ideas of Paul Hearty, a geologist from the University of North Carolina at Wilmington.

Here’s how I summarized their argument:

“The idea is that Earth’s climate went through a warming period just over 100,000 years ago that was similar in many ways to the warming now attributed to the actions of man. And the changes during that period were so catastrophic, they spawned massively powerful superstorms, causing violent ocean waves that simply lifted the boulders from below and deposited them atop this cliff.”

Since writing this, I’ve often seen this passage cited or referenced – but not necessarily in the way that I intended. Rather, it seems that some are actually using it as a way of raising doubt about climate change overall, or about Hansen’s and Hearty’s arguments in particular. Emails to me, Tweets, and online comments seem to be focusing in particular on the first sentence and its emphasis on periods of past warming, versus what’s happening in the present.

To just give one example, see the comments here, at the blog of University of Wisconsin law professor Ann Althouse. Here’s one of them: “Did people cause all the warming 100,000 years ago, too?”

In other words, the basic objection seems to be: Hey, the Earth has been warm before, specifically during this period in question (known as the Eemian) when it is believed that the boulders were moved by waves to their present location. So isn’t this just more proof that climate change is driven by natural cycles, or happens on its own? How is this any reason to worry about what is happening today?

The answer, in essence, is threefold. Yes, the Earth has always gone through climate cycles, which includes warm periods such as the Eemian. But for precisely this reason, climate scientists are now studying the Eemian to learn what might be in store for us as we approach higher and higher levels of planetary warmth (again). Indeed, the principal difference between the Eemian and present may be that we’re forcing the climate much faster than anything natural did in the past – which is grounds for major concern, not dismissal.

Let’s go through this in order.

First of all, the Eemian is indeed evidence that the Earth on its own, entirely without prodding by humans, goes through major climate changes that alter temperatures, sea levels, and much more. (Not that this should be news to anyone.) In particular, the warm Eemian climate was the result of planetary orbital variations that have long been known to drive changes between cold glacial and warm interglacial periods. It had nothing to do with fossil fuel burning.

Indeed, just in case you are wondering what we were up to back then, Homo sapiens had emerged in Africa, but major movements outward from the continent appear not to have even started yet. Also, we still shared the world with Homo neanderthalensis.

But — and this is the second key point — that doesn’t mean that studying the Eemian is irrelevant to the present. Far from it.

Hansen and his colleagues know very well that humans didn’t cause the Eemian. But they are nonetheless using all of the tools at their disposal, ranging from geological studies of the Bahamas to climate change models, to understand what happened with the planet’s climate back then. That’s because they think that understanding the Eemian period will reveal the nature of important large scale climate dynamics involving the planet’s ice sheets and oceans, and whether these kinds of changes could recur in our own era.

After all, if the melting of polar ice changes ocean currents — as these researchers believe it will — that’s something that should happen regardless of the immediate cause of that melting. And indeed, there is evidence of multiple ocean current slowdowns or shutdowns during the planet’s past history.

Which leads to the third point — our future won’t be the same as the Eemian in all respects, but that’s hardly a consolation. Hansen actually believes that humans are shoving the climate system much harder now than it was shoved back then, with our rapidly escalating concentrations of atmospheric carbon dioxide.

The bottom line, then, is that to cite past warm periods as if they somehow invalidate what’s happening during the present one, is to deeply misunderstand the significance of these periods to the current climate debate, and to scientific understanding.

Rather, scientists have long studied past climate cycles, as well as current naturally driven climate variations (such as El Niño), to better enhance their understanding of the entire system and how it works. So whatever happened in the Bahamas during the Eemian, the mere existence of these cycles is really not a good reason for doubting human caused climate change.

When looking for wildlife in Costa Rica, it’s easy to become fixated on the unusual mammals and vibrant birds, but…