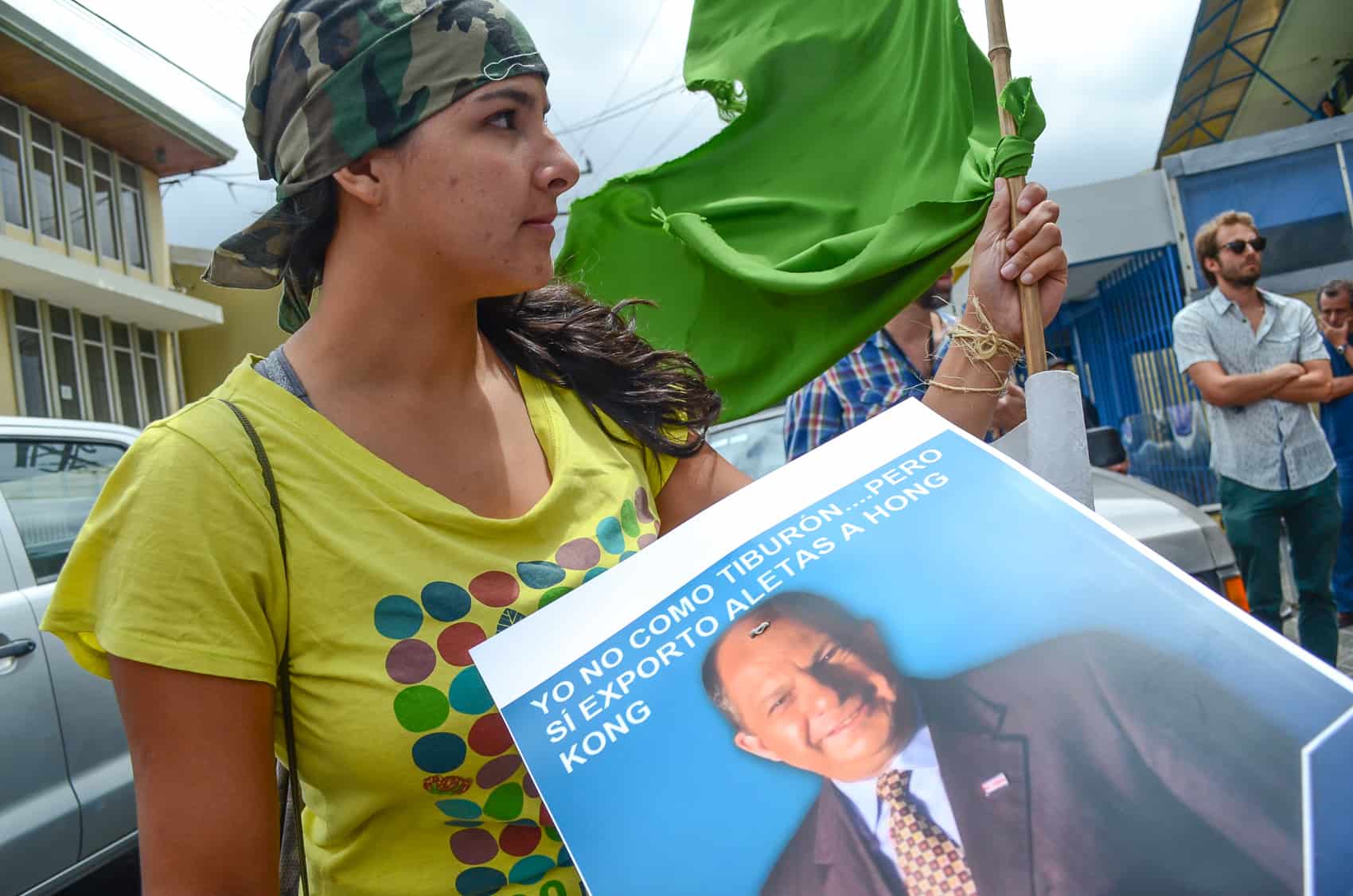 A protester in front of Costa Rica's Environment Ministry on March 12, 2015 holds a sign of President Luis Guillermo Solís that reads: "I don't eat sharks...But I do export fins to Hong Kong," a reference to Solís' participation in a previous anti-shark finning campaign. (Alberto Font/The Tico Times)

Editor’s note: The following is an op-ed defending the “Shark Enemy” of the year nomination for President Luis Guillermo Solís. You can read about the Costa Rican government’s reaction to the nomination here.

Currently, Costa Rica is in danger of driving endangered hammerhead shark populations and sea turtles to extinction, losing its status as an environmental leader, and seeing eco tourism dollars disappear if it continues on the wave of destruction laid out by President Solis’ new administration.

First, Solis’ administration has already allowed the blatant export of fins from over 1,000 endangered hammerhead shark fins to Hong Kong in violation of international agreements. Furthermore the administration has stated that they will:

Under former President Laura Chinchilla, Costa Rica pioneered domestic anti-shark finning legislation that later served as a global model, and played a key role in securing an Appendix II listing for endangered hammerhead sharks under the Convention on the International Trade in Endangered Species of Wild Fauna and Flora (CITES). President Luis Guillermo Solís Rivera’s administration has made clear that it intends to chart a course that will fuel the extinction of shark populations.

Second, the Solís administration is backtracking on moves by Former Costa Rican President, Laura Chinchilla, to phase out the industrial shrimp trawl fishery, one of the world’s dirtiest fisheries. Currently, for every pound of shrimp harvested by Costa Rica’s shrimp industry, it discards 9.5 pounds of fish as bycatch. That bycatch is important to sustain local fishing communities. In addition, the dirty industrial fishery is trapping nearly 10,000 endangered sea turtles per year, killing snapper and destroying local fishermans livlihoods.

Making matters worse, the Solís administration has stymied actions to clean up corruption within Costa Rica’s fisheries agency, which is ruled by a Board of Directors represented by commercial fisheries interests, thus compromising the public trust of the Costa Rican people. Former President Chinchilla had lobbied for the agency to be completely shut down, but those efforts under the Solís administration where stonewalled.

Third, even under intense international pressure Costa Rica’s justice system failed to convict thugs for the murder of a sea turtle conservationist, Jairo Mora. In one of the most heinous “environmental” crimes to occur on Costa Rican soil in decades, Mora and four international volunteers were abducted while on sea turtle patrol at Moín Beach.

This resulted in Mora’s death and the sexual assaults of the women, who escaped alive. Mora had asked for police protection after receiving threats, but the government failed to act. Though recordings of the perpetrators bragging about the crime surfaced, and other damming evidence was uncovered, mishandling of it prevented it’s use during trial, resulting in the astonishing “not guilty” verdicts.

To make matters even worse and more shameful, the government has yet to announce if it will file an appeal of the case. Mora’s death and the clear mishandling of evidence associated with it is sending shock waves around the world. Yet, the current administration has not called for a retrial.

Now, the important sea turtle nesting site once protected by Mora has been approved for port development, despite the environmental threat it imposes to endangered turtles and other species. Whether coincidence or not, the situation has raised the ire of environmental and human rights communities, and has exacerbated tensions between the current government and the environmental community.

These three issues and others like them not only threaten Costa Rica’s reputation as an environmental leader, but the very basis of its economy, and the ecology of the nation. Tourism, especially ecotourism is considered key to the country’s economic development. Tourism earns more foreign exchange than the combined exports of the country’s three main cash crops: bananas, pineapples and coffee.

Furthermore, volunteer eco-tourists fuel much of the conservation work in Costa Rica, especially protection of endangered sea turtle nesting beaches and many conservation projects around the country. A slow down on tourists will result in a slow down in Costa Rica’s economy, and that should be a concern to President Solís.

It time for the Solís administration to reverse course, and protect Costa Rica’s reputation and its economy. A few sound policy decisions now could signal to the world that Costa Rica is serious about protecting the environment, safety and human rights of its citizens and tourists.

We call on the Solís administration and Costa Rica to:

Now is the time to demand that President Solís put in place the smart policies outlined above because they are key to safeguarding wildlife like scalloped hammerhead sharks, which are listed under the U.S. Endangered Species Act, and key to ensuring that his country remains an eco-tourism jewel of Central America.

Randall Arauz is president of the Costa Rican environmental organization PRETOMA and Latin American director of Turtle Island Restoration Network. Mr. Arauz is the 2010 winner of the Goldman Environmental Prize for his work to expose shark finning and serves as a member of the (World Conservation Union) Marine Turtle Specialist and Shark Specialist Groups. Arauz has served as Costa Rican delegate to United Nations Law of the Sea Conference (UNCLOS), the Convention on the International Trade in Endangered Species of Wild Fauna and Flora (CITES) and Convention on the Conservation of Migratory Species of Wild Animals (CMS), and serves as an elected member of the official Cocos Island Marine Conservation Area Council and the Council of Scientific Authority Representatives to CITES.

Todd Steiner is the executive director of the international environmental organization Turtle Island Restoration Network headquartered in California with staff in the U.S. and Costa Rica. Mr. Steiner serves as a member of the (World Conservation Union) Marine Turtle Specialist Group, Cordell Bank National Marine Sanctuary Advisory Council, as a member of the NOAA-DFG Priority Action Coho Team, Technical Working Group and as a Board member of the Center for Biological Diversity.