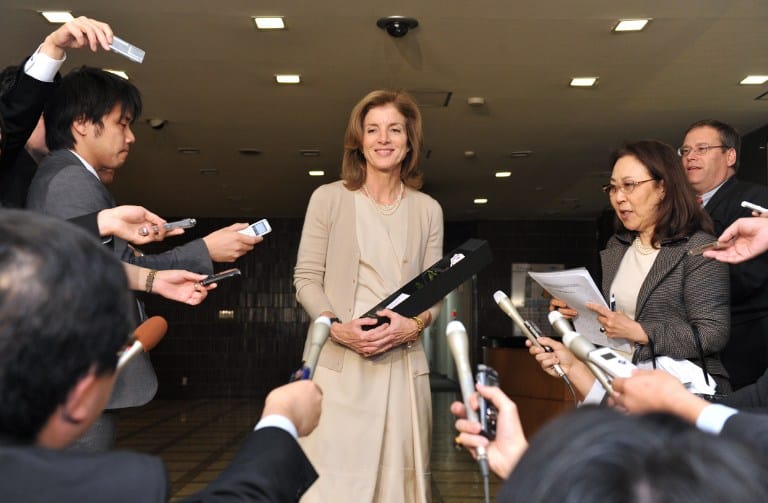 U.S. ambassador to Japan Caroline Kennedy, holding a flower in a box presented by Japan's Foreign Minister Fumio Kishida, speaks to reporters after a meeting at the Foreign Ministry in Tokyo on Nov. 20, 2013. In a tweet this week, Kennedy criticized the annual dolphin slaughter at the western town of Taiji – the topic of Oscar-winning 2009 documentary "The Cove." (Kazuhiro Nogi/AFP)

The Japanese loved the idea of Caroline Kennedy in Tokyo – Camelot meets the Chrysanthemum Throne. But what if the new U.S. ambassador proves to be a handful for a nation that prizes politeness and propriety above all else?

Tongues are wagging around Nagatacho, Tokyo’s Capitol Hill, following Kennedy’s tweet about a notorious annual dolphin hunt in the western town of Taiji – the topic of Oscar-winning 2009 documentary “The Cove.”

Kennedy was “deeply concerned by inhumaneness of drive hunt dolphin killing,” she wrote, noting the U.S. opposes the practice of prodding hundreds of dolphins into a cove for slaughter or capture.

It’s a brutal business, one that the townspeople passionately defend on the grounds of heritage and tradition. They work aggressively to stop film crews from chronicling a hunt that seems more the stuff of 1814 than 2014. (Activists say the annual hunt became a “tradition” only in the 1960s.) Whatever the official U.S. policy, Kennedy’s criticism caught the Tokyo establishment off guard, raising questions about whether she will be a more outspoken and unpredictable U.S. envoy than expected.

Kennedy’s first foray into the sensitive waters of domestic Japanese affairs came after Prime Minister Shinzo Abe’s Dec. 26 visit to Yasukuni Shrine. The site, which honors 14 Class A war criminals from World War II, is downright radioactive in a region that believes Japan hasn’t atoned for its wartime aggression. Kennedy’s team surprised many in Tokyo by expressing disappointment with Abe’s action. The question is whether the dolphin tweet is an aberration or a sign of a newly activist embassy.

If words are cheap, then tweets are little more than bankrupt thought fragments. But if Kennedy becomes a consistent and thought-provoking voice in Tokyo, broaching issues officialdom would prefer the U.S. ignored, her ambassadorship will be a fascinating and potentially fruitful one. I, for one, would encourage her to opine early and often on any number of topics: empowering women in the workforce and politics; improving geopolitical relations in North Asia; encouraging young people to go into public service and to question authority; inviting America’s top entrepreneurs to spend more time in Japan to encourage startups; and, yes, speaking out about issues like Taiji and also Japan’s continuing whale hunts.

Ambassadors naturally must be careful and respect local cultures. Kennedy also needs to watch the hypocrisy factor. Japanese are plenty horrified about U.S. methods for raising and slaughtering cows, pigs and chickens in factory farms, not to mention the passion for genetically modified food. Chinese officials wonder how animal-rights folks like Brigitte Bardot have time to bash their culinary quirks when there’s plenty to complain about in her native France. Hey, Brigitte – fancy some foie gras?

But Japanese seem not to understand how severely issues like Taiji and whaling damage its “soft power” around the globe. The headlines generated in New York, Zurich or Sydney from anime, manga, cosplay and food conventions can be quickly undone by a three-minute BBC or CNN report about bloody waters and mammals culled for questionable reasons. My own favorite canard is Japan’s “research whaling” program. OK, so which website can I visit to read all the research and insights gleaned from harpooning 1,000 or more whales every year? Oh, that’s right. There isn’t one.

That’s precisely the point Yoko Ono made Monday in an open letter to the Taiji fishermen, urging them to halt the annual bloodbath for the “future of Japan.” She warned that this unsightly tradition “will give an excuse for big countries and their children in China, India and Russia to speak ill of Japan. I am sure that it is not easy, but please consider the safety of the future of Japan, surrounded by many powerful countries which are always looking for the chance to weaken the power of our country. At this very politically sensitive time, the hunt will make the children of the world hate the Japanese.”

“Hate” is a strong word coming from the widow of John Lennon, who wrote pop standards like “Imagine,” “Give Peace a Chance” and “All You Need is Love.” But Ono’s point is a timely one. With one brief trip to a Tokyo shrine, Abe squandered all the great international press about Japan winning the 2020 Olympics, or racing to help typhoon-ravaged Filipinos. These inhumane dolphin and whale hunts are equally self-destructive.

Kennedy’s own comments were an unusual move for a U.S. envoy in Japan. Previous ambassadors such as John Roos, Thomas Schieffer and Howard Baker did fine jobs, but were uncontroversial and, for many Japanese, forgettable. Kennedy arrived in November with considerable fanfare. She’s the only surviving child of President John F. Kennedy, the first woman to represent the U.S. in Japan and quite the wild card.

The thing is, the Japanese and U.S. governments are as close as friends get in this chaotic world of ours. Friends should always be honest with each other, and that goes too for Kenichiro Sasae, Japan’s envoy in Washington. It’s certainly possible that Kennedy’s dolphin comment was a one-off and that the outcry it inspired will chasten her Twitter musings. But that would be shame. We live in dynamic times. Why not spark a dynamic and unscripted discussion from time to time between friends?