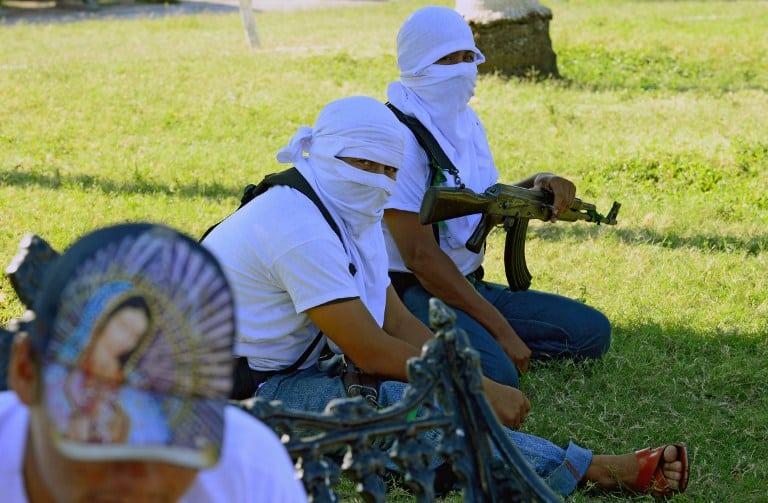 Members of the citizens' Self-Protection Police take a rest upon their arrival in Nueva Italia, Michoacán, Mexico, on Jan. 12, 2014. The Mexican government deployed hundreds of forces after several attacks against federal police in villages of western Michoacán state. (Alfredo Estrella/AFP)

NUEVA ITALIA, Mexico – Vigilantes seized a drug cartel’s bastion in western Mexico on Sunday, sparking a shootout as civilian militias gained new ground in their struggle against the gang in a violence-plagued region.

Hundreds of armed civilians riding in more than 100 pickup trucks rolled into the Michoacán state town of Nueva Italia and were met by gunfire from presumed members of the Knights Templar cartel when they reached the municipal office.

“They shot at us from two locations and the clash lasted about an hour and a half,” Jaime Ortiz, a 47-year-old farmer and vigilante leader from the town of La Ruana, told AFP.

Two members of the self-defense unit were wounded, he said, standing in the 40,000-population town’s main square, surrounded by hundreds of men armed with AK-47 assault rifles, bulletproof vests and radios.

Some sidewalks were soaked in blood in the town’s empty streets.

The growing civilian militia movement, which first emerged in Michoacán nearly a year ago, has seized more communities in recent weeks in their bid to oust the Templars from the state.

The turmoil in Michoacán has become the biggest security challenge of President Enrique Peña Nieto’s 13-month-old administration, which inherited a drug war that has killed more than 77,000 people in the past seven years.

Peña Nieto deployed thousands of troops and federal police to the state in May, but the reinforcements have failed to contain the violence.

Interior Minister Miguel Osorio Chong has said the self-defense units are illegal. Yet some critics charge the government is protecting them.

The Templars have accused the vigilantes of being a proxy force for the rival Jalisco New Generation drug cartel, a charge the militias deny.

The militias have now surrounded Apatzingán, a city of 123,000 people considered the main Templar stronghold in Michoacán’s lime and avocado growing region known as Tierra Caliente, or Hot Country.

Vigilante leaders have stated that Apatzingán was a key target because of its importance to the cartel and because it is a vital trade hub for their limes, avocados and mangos.

In October, hundreds of self-defense militia members marched into Apatzingán unarmed and fled after being welcomed with gunshots in the main square.

“It is very close. We want to seize it but we don’t have a date yet. It will be in the next few days,” said Hipolito Mora, a prominent vigilante leader from the town of La Ruana.

In Nueva Italia, the streets were empty, restaurants and shops closed their doors and residents shut their windows after the vigilante incursion.

The vigilantes met with the mayor and residents to explain their strategy against organized crime.

“At first we supported the Templars because we believed that they were protecting Michoacán,” said a mother of two who attended the meeting and requested anonymity.

“But now the economy is very weak, they don’t let us work and they charge protection money,” she said.

Towns began to form vigilante forces in February 2012, saying they were fed up with the local police’s inability of unwillingness to stop the cartel’s murders, kidnappings and extortion rackets.

But the self-defense forces have been seen with a measure of suspicion.

Opponents of the vigilantes have burned trucks and buses in the past week to protest the militias’ incursions in the region. The vigilantes say the protesters are coerced or paid by the Templars.

Michoacán Governor Fausto Vallejo said new “coordinated actions” with the federal government would be announced on Monday to deal with the unrest.

Critics say Michoacán has become a “failed state,” with local authorities powerless to control the situation.

“What we are observing is the absence of the state, the absence of governability,” the head of the National Human Rights Commission, Raul Plascencia, told El Universal newspaper.