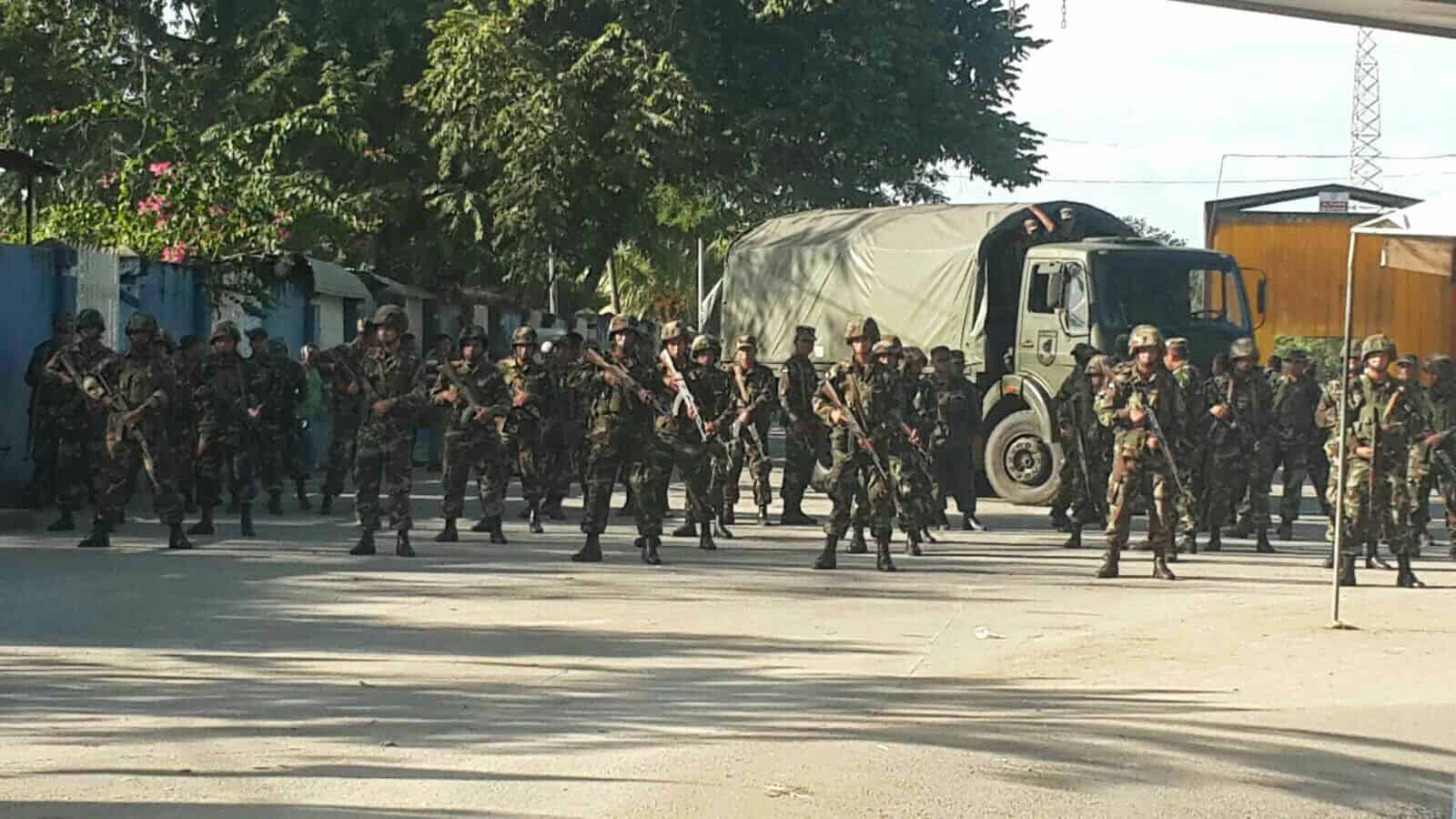 The Nicaraguan Army marches at the Peñas Blancas crossing after the country temporarily closed its border on Nov. 15, 2015. ((Courtesy Costa Rican Foreign Ministry))

PASO CANOAS, Puntarenas – Alain Pentón looked surprisingly calm sitting on a bench as a crowd of Cuban migrants anxiously gathered in front of Costa Rica’s immigration control center, just across the border with Panama. Pentón, a 38-year-old Cuban migrant, left the island at the end of September. After facing extortion from Colombian police on his way toward the United States, waiting for a temporary transit visa in Costa Rica was a piece of cake, he said.

Pentón and his group of seven friends and family from Havana eventually received their temporary Costa Rica visas and boarded the first bus out of Paso Canoas. The crowd cheered and the Cubans on board waved to their compatriots as the neon green Tracopa bus pulled onto the Inter-American Highway, headed north. But their troubles weren’t over yet: Nicaragua closed its border to the Cubans on Sunday and riot police fired shots and tear gas after 700 Cuban migrants reportedly tried to cross into the country.

“We were completely peaceful, asking them [Nicaraguan authorities] to let us pass or at least give us an answer,” said an unidentified man on an audio recording released by Costa Rica’s Foreign Ministry on Sunday. “They just used force without warning on the Cubans trying to escape the prison there [Cuba]. We just want to follow our dream, that’s what we’re looking for,” said the man.

He claimed that a young child was injured in the incident along with at least two other women. The Foreign Ministry said it could not independently confirm the details of that account.

Costa Rican Foreign Minister Manuel González said Nicaragua’s decision to close the border was “totally irresponsible,” and he refuted a letter of condemnation from the Nicaraguan government accusing Costa Rica of goading the Cubans to cross en masse.

A news release from the Nicaraguan military stated: “For a week Costa Rican authorities have promoted the entry into national territory of illegal people at blind spots [along the border], at a pace that’s increased in recent days, promoting the forced entry of Cuban citizens, who have been detained, turned over to the corresponding authorities, and returned to Costa Rica.”

‘Into the clutches of organized crime’

About 1,100 Cuban migrants were at Costa Rica’s Peñas Blancas border crossing as of Sunday, Immigration Administration Director Kathya Rodríguez said during a news conference. As many as 2,000 Cuban migrants have entered Costa Rica since it briefly closed its border to them on Wednesday. On Saturday, Costa Rica began issuing temporary transit visas to Cuban migrants at Paso Canoas, valid for seven days.

The Cuban migrants “are going to look for any way to cross and it will drive them right back into the clutches of organized crime,” González said at the same news conference.

Pentón said that he chose the route through Central America because it is less policed than the 90-mile sea route across the Straights of Florida. Cubans have been able to pass through Central America in increasing numbers and relatively without issue during the last several years, but the timing of a crackdown on human smuggling networks in Costa Rica and elsewhere has left Pentón and hundreds more wondering how they’ll reach the United States.

A series of police raids across Costa Rica that targeted a human smuggling network on Nov. 10 left hundreds of migrants without a way to cross the border. Within days, at least 1,200 Cubans arrived at the Paso Canoas border checkpoint with Panama, without papers or transportation. On Saturday evening, Foreign Minister González called on Central American nations to come to a solution on how to handle the sudden influx of Cubans passing through the isthmus. He echoed concerns by immigration officials and the Prosecutor’s Office that the unregulated flow of Cuban emigrants exposes them to exploitation by criminal organizations and threatens their human rights.

For political and economic reasons, thousands of Cubans are leaving their homes for the U.S.

“The situation for the average person in Cuba is chaotic – socially and economically,” Pentón said.

“In Cuba it’s not enough to work hard. You have to steal to survive,” he said, adding that police corruption and abuse had worsened on the island recently.

Pentón said that in addition to the time he and his family needed to raise the funds to leave Cuba, he was worried about the possibility that a change in the U.S.’ “wet-foot, dry-foot” policy for Cuban immigrants could leave his group without the ability to request asylum there.

One of the first 150 Cubans to get a temporary transit visa. @TheTicoTimes via @presidenciacr pic.twitter.com/Du4Jnx9Dae

Pentón and his group were not the only ones skeptical that a normalization of relations between the U.S. and Cuba would improve life there. Several of the Cuban emigrants who spoke with The Tico Times said that no change would come to the island as long as the Castro brothers were in power.

Pentón said that he and his wife, Amarilys, would try to reach Miami where her sister is. Another migrant in their group who did not give her name showed The Tico Times a small slip of paper with an address in Round Rock, Texas – a suburb north of Austin – as her final destination. She was able to find a friend of hers on Facebook who left the island years ago.

Despite the hurdles – from Colombian police shakedowns to the Nicaraguan military – Pentón said turning back is not an option.

“We sold everything we had to make this trip – down to our bicycle,” he said. “We would die before going back to Cuba.”