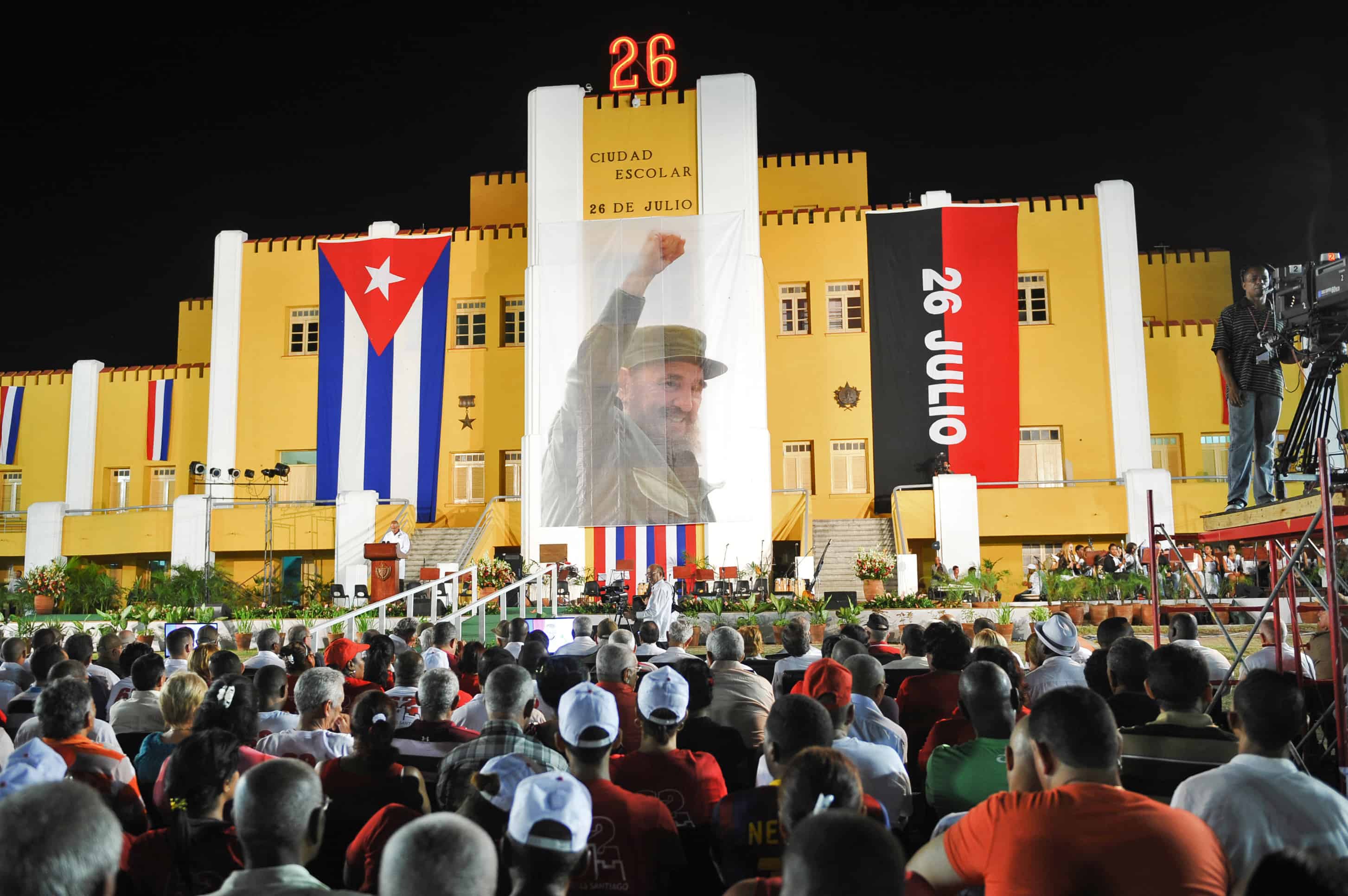 Celebrations mark the 62nd anniversary of the guerrilla assault on the Moncada Barracks, widely regarded as the beginning of the Cuban Revolution, in Santiago de Cuba, on July 26, 2015. (Yamil Lage/AFP)

SANTIAGO DE CUBA – Cuba marked the anniversary of Fidel Castro’s first armed uprising 62 years ago Sunday with calls for an end to the U.S. embargo and the return of the U.S. Naval base at Guantanamo.

The ceremony — attended by Cuban President Raúl Castro and some 10,000 of the country’s ruling elite and their guests, but not by the frail 88-year-old Fidel — was the first since the restoration of relations with the United States.

“Now begins a long and complex road toward the normalization of bilateral relations, which includes, among other things, the end of the blockade and the return of the Guantanamo Naval base,” said José Ramón Machado Ventura, the No. 2 of Cuba’s communist party.

Machado’s brief speech contrasted with the hours long anti-Yanqui orations Fidel was known for, particularly on the July 26, 1953 anniversary of the assault he led on the Moncada Barracks in Santiago.

Though a military failure that landed Castro in prison, the uprising is considered the start of a revolutionary movement that ultimately ousted the dictatorship of Fulgencio Batista in 1959.

Across the country in Havana, 40 members of the Ladies in White opposition group and another 27 activists who were holding a weekly protest march were arrested and held for several hours, their leader Berta Soler told AFP.

Cuban authorities do not confirm arrests. Fidel Castro, center, and comrades in Los Palos, Havana province, in July 1953, during the preparation for an attack on the Moncada Garrison. To the left: Antonio (Nico) López and Abel Santamaria; on the right: José Luis Tasende and Ernesto Tizól. AFP

Fidel stepped down as the country’s president in 2006 in poor health. His brother and successor, Raúl, has presided over tentative economic changes, but the overwhelming majority of the Soviet-style economy is still government-run and in grim shape.

Cuba’s main ally and economic partner of more than a decade, Venezuela, is facing economic and political crises that some analysts fear could destabilize Cuba.

And on Dec. 17, Raúl Castro and U.S. President Barack Obama stunned the world by announcing plans to restore relations severed for more than half a century. On July 20, the longtime Cold War foes reopened embassies in each other’s countries.

A U.S. trade embargo remains in effect, however, with opposition to lifting it strong in the Republican-dominated U.S. Congress.

The U.S. Naval base at Guantanamo on the southeastern tip of Cuba is now best know for a U.S. prison holding suspected violent militants. Cuba says the base is illegally occupied.

President Obama made the closure of the controversial offshore prison a priority when he took office in 2009, but the plan has faced numerous setbacks, including Congress blocking the transfer of detainees to U.S. prisons. Last week, a White House spokesman said the Obama administration is in the “final stages” of a plan to close the Guantanamo Bay detention facility. Members of Batista's army ready for action after an attack on the Moncada garrison by a group led by Fidel Castro on July 26, 1953. AFP

Washington says it is mindful of human rights concerns in Cuba, the only communist-run, single-party state across the Americas.

But it appears for now to have stopped conditioning bilateral relations on changes it unsuccessfully pressed for over five decades.

Years after the Cold War melt, Cuba still allows only one political party, does not have a free press and cracks down on public assembly it deems worrisome.

Raúl Castro, 84, has said he will step aside in 2018, and has named his communist successor, Miguel Díaz-Canel, 55.