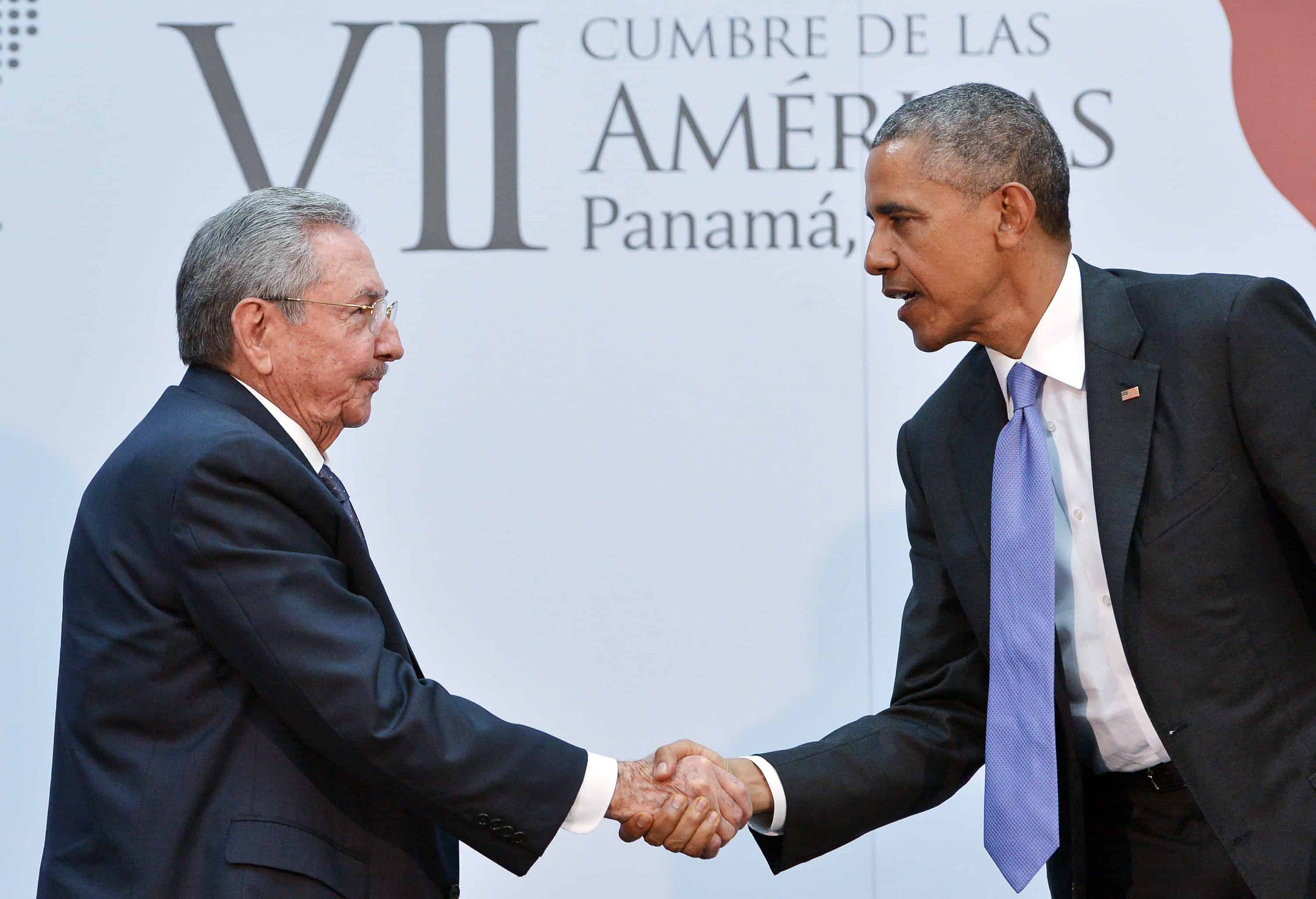 U.S. President Barack Obama shakes hands with Cuba's President Raul Castro during a meeting on the sidelines of the Summit of the Americas at the ATLAPA Convention center on April 11, 2015 in Panama City. (Mandel Ngan/AFP)

PANAMA CITY, Panama — President Barack Obama and President Raúl Castro symbolically ended more than a half-century of official estrangement between the United States and Cuba here on Saturday in a historic-face-to-face meeting that Obama said put them on “a path toward the future.”

In a small room with two chairs side by side, Castro smiled as Obama said that they would relay their concerns about each other’s policies but could disagree with a spirit of respect.

“Over time, it is possible for us to turn the page and develop a new relationship between our two countries,” Obama said. He said their immediate task is to reopen embassies in Havana and Washington.

After the two shook hands, Castro, speaking in Spanish, said he agreed with everything Obama had said.

“We are willing to discuss everything, but we need to be patient, very patient,” Castro said before reporters were ushered from the room. “We might disagree on something today on which we could agree tomorrow.”

The meeting, on the sidelines of the 35-nation Summit of the Americas being held here, followed a dramatic speech to the gathering in which Castro called Obama “an honest man … a humble man,” who is not to blame for what he said was more than a century of U.S. oppression of Cuba and is “courageously” trying to persuade Congress to lift its embargo against his country.

Speaking for nearly an hour, Castro first pounded the table and recounted the history of what he called U.S. oppression and abuse of Cuba, from early military incursions and occupation to the Bay of Pigs invasion and what he described as U.S.-sponsored terrorist attacks on the island.

“I apologize to Obama for expressing myself so emotionally,” Castro said. “President Obama has no responsibility for this. There were 10 presidents before him; all have a debt to us, but not President Obama…I have read his books — parts of them — and I admire his life.” As he spoke, Obama sat without expression, his eyes downcast.

The two leaders announced in December that they would normalize relations and that they intend to reestablish formal diplomatic ties. The opening of embassies in Washington and Havana has awaited the U.S. removal of Cuba from its list of state sponsors of terrorism, a move that Obama is preparing to make in the coming days, if not at the summit itself.

Before the highly anticipated bilateral meeting, each of the 35 hemispheric leaders at the summit first delivered formal speeches in the public plenary session.

In his speech, Castro angrily denied Cuban participation in international terrorism, saying that although his country had supported other revolutions, its experience with terrorism came primarily from what he called U.S.-sponsored terrorist attacks inside Cuba in decades past.

Obama spoke immediately before Castro. He told the gathering that he had committed the United States to a “new approach” to the region when he attended his first Americas summit in 2009. “I met that commitment,” including the decision to restore ties with Cuba, he said.

Just before Obama’s speech, Ecuador’s leftist President Rafael Correa, an ally of Cuba, railed against the embargo and recounted what he said were the sins of U.S. multinational companies in his country. He demanded the return of U.S.-occupied Guantanamo Bay in Cuba and spoke of “North America and our America.”

Obama, in what appeared to be extemporaneous remarks that were not part of his prepared speech, addressed Correa by name, saying he was “not interested in theoretical arguments.” The Cold War, he said, “has been over for a long time, and I’m not interested in having battles that, frankly, started before I was born. What I’m interested in is solving problems and working with you…in the spirit of alliance.”

“I always enjoy the history lessons that I receive when I am here,” Obama said evenly. “I’m the first to admit…there are dark chapters in our history….We can, I suppose, spend a lot of time talking about past grievances. And I suppose that it’s possible to use the United States as an excuse…for political problems that may be occurring domestically” in Latin America. “But that’s not going to bring progress.”

Instead, he said, he would rather talk about climate change, economic growth and security.

Debates about the past, Obama said, in a clear jab at Correa’s economic and political difficulties at home, are “not going to solve the problems of children who can’t read, who don’t have enough to eat….I just want to make very clear that when the United States speaks out on human rights, it’s not because we think we’re perfect, but because we think the idea of not killing people because they disagree with us is the ideal.”

Speeches from heads of state were theoretically limited to eight minutes, but Castro, who was making his first appearance at the summit, held every three years since 1994, asked for some indulgence.

“Since I was excluded for the past six summits,” because of U.S. insistence, “I ask you to excuse me if I go a few minutes more,” he said, indicating he would speak for “six times eight minutes.” He ended 50 minutes later, saying that Cuba, “a small country with few natural resources, has lived under hostility” and that his lengthy remarks were of historical importance.

Later Saturday, after Obama had left the room, Venezuelan President Nicolás Maduro began an equally lengthy speech. After denouncing U.S. sanctions imposed on officials in his government, as well as a U.S. declaration that Venezuela is a “national security threat” to the United States, Maduro said he, too, respected Obama, “in spite of the fact that he has threatened our motherland.”

Maduro, too, spoke emotionally, shouting parts of his speech and rejecting Obama’s call for a forward-looking vision in the region unburdened by old grievances. “We talk about our history so much because we’re proud of it,” he said. “We don’t have a dark past that we regret because we’ve killed people in other countries and dropped bombs on them.”

The Venezuelan leader seemed to have planned his remarks thinking Obama would be present while he delivered them, which left Maduro calling for “dialogue” and extending an open hand to the U.S. president’s empty chair.

Maduro said he wanted to believe Obama’s statements in favor of better relations “but didn’t trust” the U.S. president.

“If you want, we’ll talk, but if you don’t want to talk, that will be your legacy with Venezuela,” he said.

Maduro said he would give U.S. diplomats the 11 million signatures he was planning to hand Obama, collected by his government in opposition to the U.S. sanctions.

At one point in the speech, Maduro, a former guitar player in a rock band, voiced his admiration of Jimi Hendrix and Eric Clapton as evidence that he is not “anti-American.” Clapton is British.