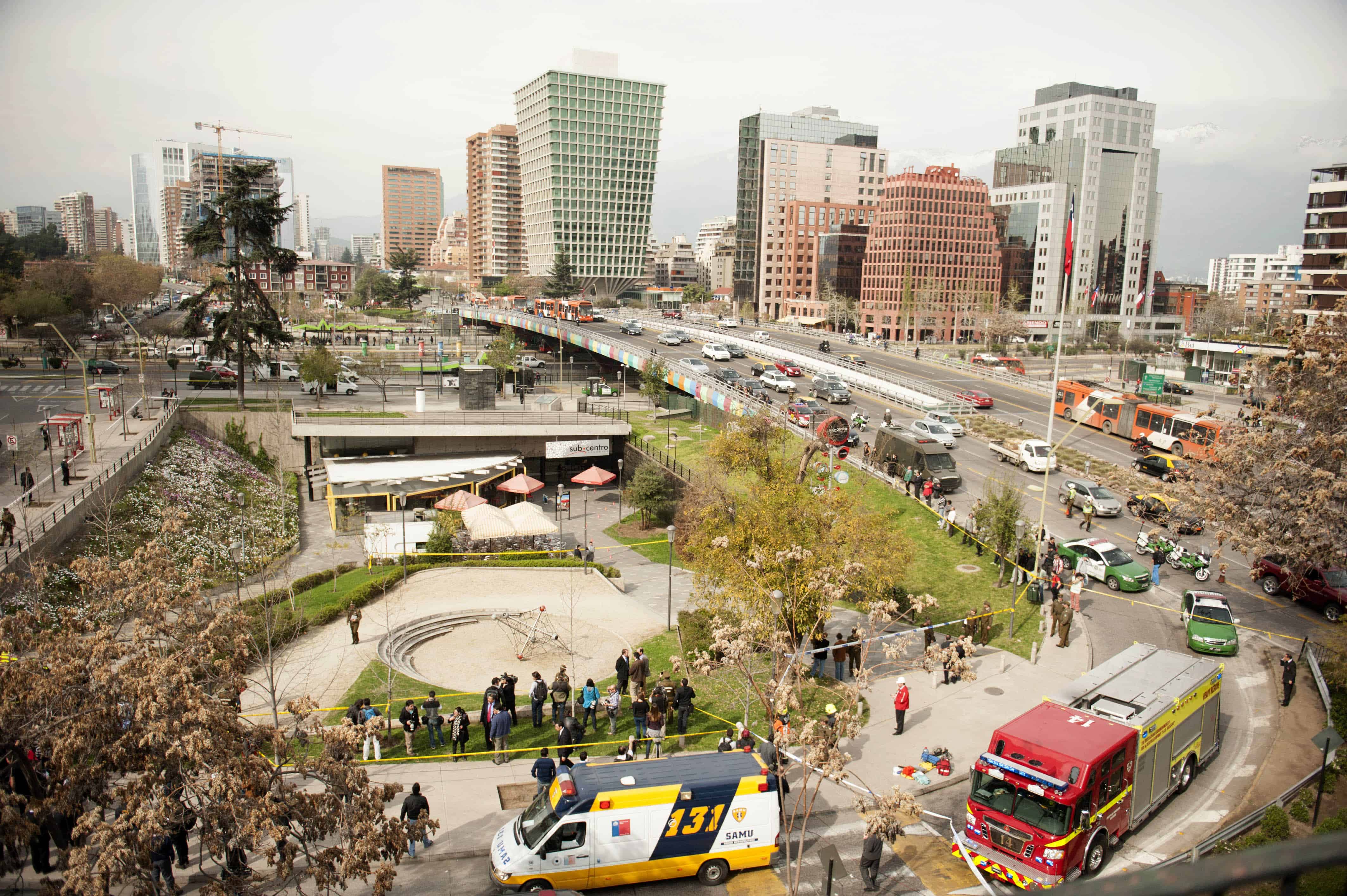 Overview of the shopping mall at the Escuela Militar subway station in Santiago on Sept. 8, 2014. An explosive device ripped through a Santiago metro station as people ate lunch in food stalls, injuring several people in a blast Chile's government called a "terrorist act." (Sergio Pina/AFP)

SANTIAGO, Chile – A homemade bomb wounded 10 people when it rocked a food court inside a packed Santiago metro station at lunch hour on Monday, with Chile’s government calling it a “terrorist act.”

The explosive device that ripped through Escuela Militar (Military School) station was made of a fire extinguisher and a clock and had been planted in a trash can, officials said.

“It was a terrible scene. A woman was sprawled on the floor, clients ran out without paying, leaving food on their plates,” Rosa Valdes, a restaurant worker, told AFP. “I’m afraid to return to work tomorrow. I will have to look inside every trash can.”

“Silvana,” a cook at a food stall next to the one hit by the explosive, said she saw people “wounded, bleeding, screaming, crying, taking pictures.”

“We never imagined that it was a bomb,” she said at the station, which serves one of the most heavily used subway lines in the capital.

No one immediately claimed responsibility for the blast, but it follows a string of unsolved small bombings in Chile and is the second one on the Santiago metro system in the last three months.

“This is an act that has the hallmarks of a terrorist act. There is no doubt about that,” said government spokesman Álvaro Elizalde, adding that the authorities would launch an “energetic response.”

President Michelle Bachelet held an emergency meeting and met three of the wounded at a clinic.

“What happened today is horrible, completely reprehensible,” the socialist leader said. “But Chile is and will continue being a safe country.”

The attack was carried out by “cowards … trying to harm people, fuel fear, and even kill innocent people,” Bachelet said. Chilean police from a bomb disposal unit arrive at the Escuela Militar subway station in Santiago on Sept. 8, 2014. Sergio Pina/AFP

“The government will not rest until these people are brought to justice. These people tried to kill innocent Chileans,” said Interior Minister Rodrigo Penailillo.

More than 100 makeshift bombs have targeted banks, gyms, embassies and restaurants in Chile in the past five years, causing relatively light damage and injuries.

Past attacks have been claimed by groups using names of old anarchist organizations.

Nobody has been convicted in connection with the attacks.

After a lull, similar bombings have reemerged in recent months.

The government stepped up security after an explosive device blew up in a subway train on July 14 and a special prosecutor was named to investigate the attacks.

Francisco Bravo, the special prosecutor, said Monday’s bomb was similar to the one used in the July attack.

The government said it would prosecute the latest attack under the country’s anti-terror law, which allows courts to impose heavier sentences than in other crimes.

The president of the opposition National Renovation party, Cristian Monckeberg, said the latest incident “could have been avoided,” adding that “a pattern is repeating itself.”