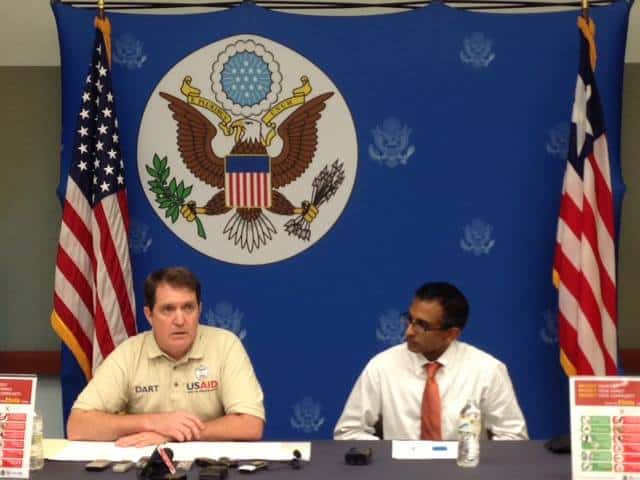 Ebola DART Leader Tim Callaghan, left, and CDC Medical Officer Satish Pillai brief media in Liberia, Africa, about what the U.S. is doing to respond to the outbreak in mid-August. ((Courtesy of USAID/OFTA Facebook))

Two Costa Rica-based USAID workers left to West Africa this month to lead disaster-relief efforts in the wake of the Ebola virus outbreak.

Tim Callaghan and Phil Gelman both work in the San José-based Latin American and Caribbean regional Office for U.S. Foreign Disaster Assistance. The office is a branch of the U.S. Agency for International Development (known as USAID/OFDA). The organization provides humanitarian assistance and resources to vulnerable populations.

Callaghan, senior regional adviser in Latin America and the Caribbean, and Gelman were selected for a six-week mission to West Africa due to their veteran experience in dealing with disasters. They’ll help coordinate the U.S. government’s disaster response to the lethal virus.

Ebola has killed more than 1,500 people in West Africa since January, according a United Nations count released on Saturday — more than all other previous Ebola outbreaks combined. USAID has committed some $19.6 million to the region, including $5 million pledge made Thursday.

On Sunday, the U.S. government delivered 16 tons of medical equipment donations to Liberia, which has tallied the highest death toll in the West African epidemic. A USAID official said the shipment included plastic sheeting to build temporary shelters and water purification kits.

Callaghan and Gelman were both involved in relief efforts in one of the most high-profile disasters in the Western Hemisphere in the last five years: the Haiti earthquake and cholera outbreak in 2010.

Callaghan, who has worked in the region since 2001, led relief efforts after the magnitude-7.0 earthquake struck the hemisphere’s poorest country. An estimated 300,000 people died from the earthquake, and more than 1.5 million people were displaced.

Gelman led the team that dealt with the cholera outbreak in October of the same year. A reported 8,562 have died in the outbreak, according to a New York Times article from April, although the number of reported cases has fallen from 350,000 in 2011 to 50,000 cases in 2013.

Some $450 million in aid was given to Haiti by USAID/OFDA in response to the earthquake. Some $44 million supported USAID efforts for the prevention and response to cholera.

The AFP contributed to this report.