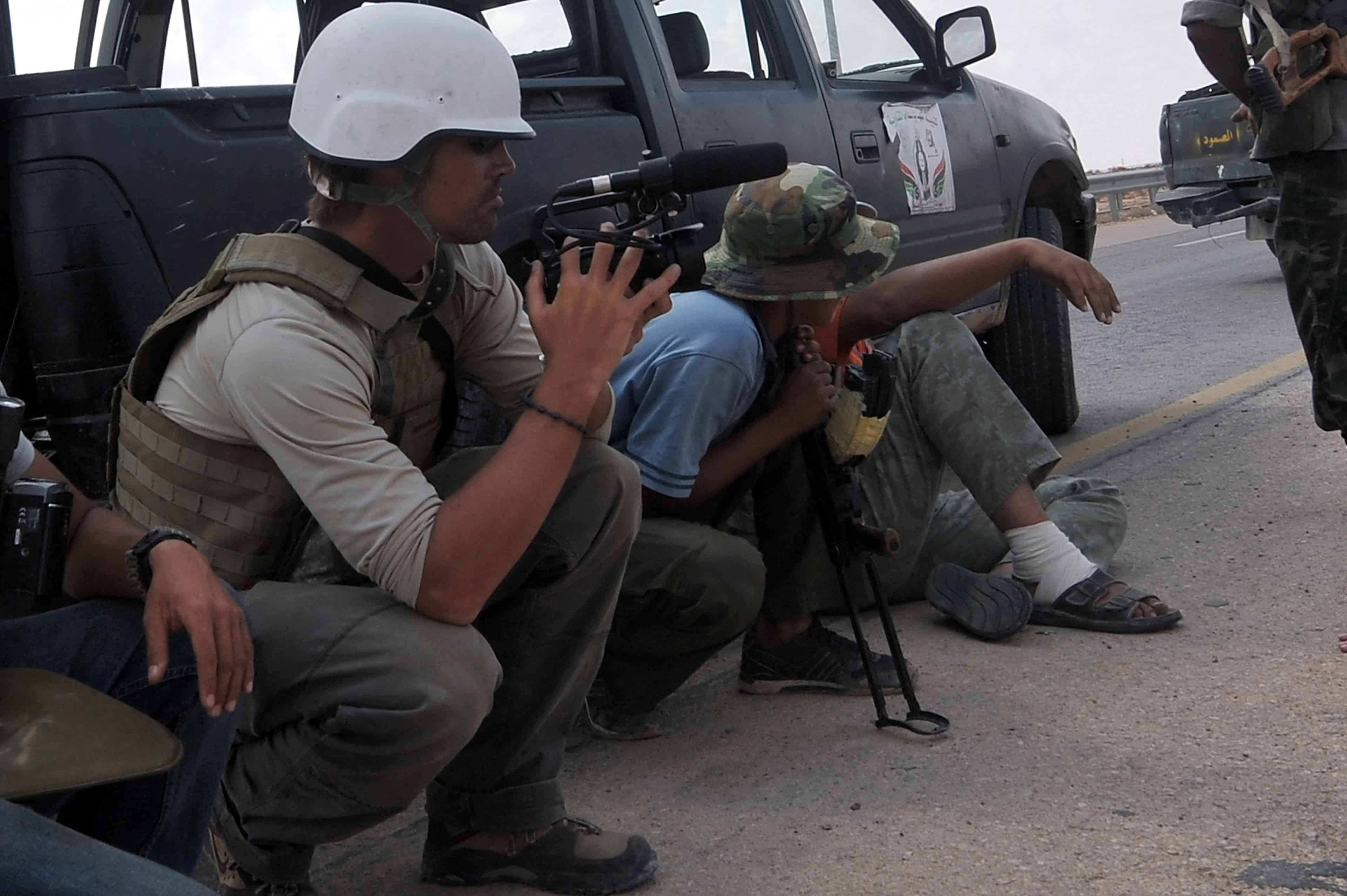 A photo taken on Sept. 29, 2011 shows U.S. freelance reporter James Foley, left,on the highway between the airport and the West Gate of Sirte, Libya. (Aris Messinis/AFP)

NEW YORK — James Foley knew the risks of living dangerously and couldn’t get enough of them.

I know because Jim was a friend of mine. When we were journalism graduate students at Northwestern University, he chose to report from the grittiest neighborhoods in Chicago. In Washington, D.C., we lived together for four months in an apartment abutting a crime-ridden neighborhood — it was a good fit for him.

And then things amped up. He went to Iraq, then Afghanistan, then Libya. He was kidnapped by loyalists of Moammar Gadhafi. His friend, Anton Hammerl, was killed — shot in front of Jim. After 44 days, he was released.

The next year, after a few months of rest and attempted relaxation in the United States, he was on a plane to Syria, which had probably replaced Libya as the most dangerous place on earth for a journalist.

The news this week of his beheading by Islamic militants, at age 40, sent me to look back at Google chats we had exchanged a few years ago. One conversation came in June 2010 when he was in Afghanistan.

Jim: Dude, I had a visa fiasco, so went to Germany to get one, took me out of Afghan for almost three weeks, now I’m back and looking to hook back up with this unit I’ve been following.

Looks to be an interesting summer. but such a hastle to travel on helicopters around here, this place is like one long waiting cue with s–t coffee.

Me: Unreal. Is it dangerous now?

Jim: Appears to be, could be interesting where I’m going.. getting some good bits of footage here and there basically I need to get on a chopper, there’s like one seat a day, and reporters are low priority, then I have to take a convoy cause they shoot stuff at helicopters coming into that place, maybe a little too dramatic.

Me: You nervous? Or at this point, does this stuff not phase you anymore?

Jim: Hmm, it’s kind of unreal, until it happens a few times, close, then you start to see why soldiers get all jittery and worse, when they get home, my conclusion — humans can’t get conditioned to getting shot at in most cases.

Jim went into journalism in his 30s, older than most entering the field. When we lived together, he spent a lot of free time creatively writing — often at night, after a full day of submitting work for class. I remember him filing pages of a notebook with stories.

He enjoyed reading David Foster Wallace, Hunter S. Thompson, Tom Wolfe and Norman Mailer — in his words, authors “who embedded themselves with the bat sh-t craziest group they could find and got some hilarious novels out of it.”

His mission after graduate school was to shed light on areas of the world that large media organizations ignored because the danger was too great. He told me in 2008 he was planning on taking a non-governmental organization job in Baghdad for the money, but the job was “boring as f-ck” because he was cooped up in a neighborhood with 24-hour security. So he left to do freelance work covering a military unit in battle. The money was never really important to him.

He freelanced for news organizations including Agence France-Presse and Global Post, going places illegally and doing things no large media organization with liability concerns would ever agree to. Go to Globalpost.com and watch some of his videos — but be prepared — a lot of it is raw and uncensored. He was so frequently in the action, putting his life at risk.

And in the end, he mobilized the world to see and react against the terrors of Syria.

He was eight years older than me, but I never felt it, even though he always called me “son.” (He called a lot of people son). We’d trade lines from movies back and forth, particularly from The Big Lebowski and Glengarry Glen Ross. We listened to hip hop and jazz together. We drank beer and hung out on the couch and talked about girls. He was low key and frequently pushed me to have deep conversations, about politics, religion and life.

Me: Man, you are a nut. Good talking to you. Come back to NYC soon. Would like to hear some good stories. Stay safe.