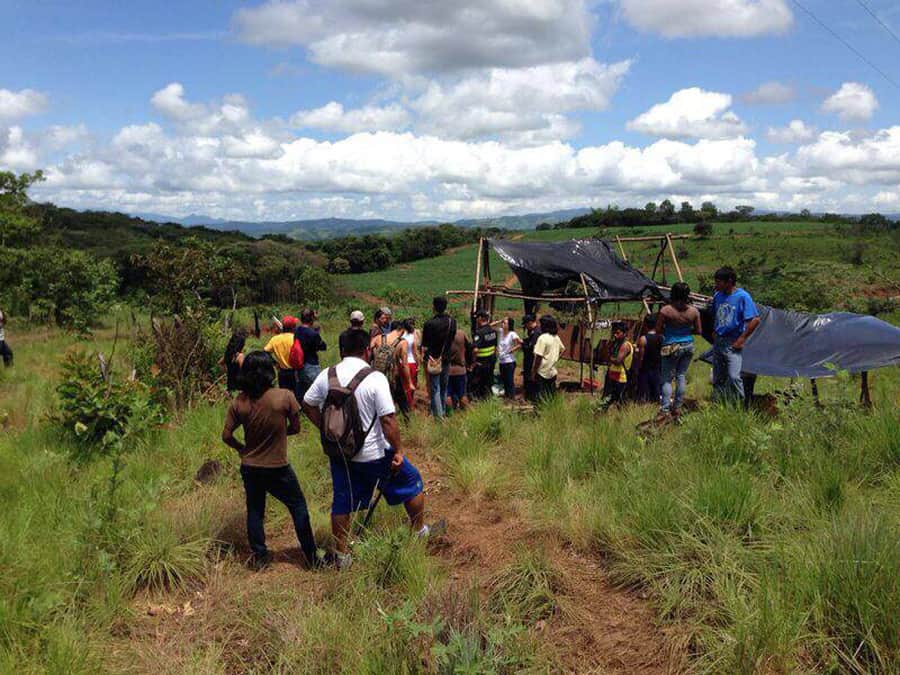 While most of the nation was celebrating Costa Rica’s long run in the World Cup Saturday, a large group of farmers in the country’s southeastern indigenous territory of Salitre were taking up arms.

The non-indigenous farmers — who illegally occupy territory in the Bribrí indigenous reserve located outside Buenos Aires, Puntarenas — mounted the attack seven days after members of the Bribrí community reoccupied land where they had built farms. According to Bribrí residents in the area, approximately 80 farmers attacked the settlement with rocks and guns, forcing the indigenous residents to flee into the mountains. Police intervene in an indigenous conflict in Salitre, in July 2014. Courtesy of Public Security Ministry

Non-indigenous people also have blocked roads, trapping the Bribrí in Salitre. According to indigenous people in the area, Bribrí residents have not been able to leave for work since Saturday.

“So far they have burned down four of our houses,” said María Suárez, 30, a Bribrí resident in Salitre. “This is our land, they can’t be here legally.”

Indigenous re-occupation in Salitre has spurred a number of violent squabbles in recent years. In January 2013, three Bribrí were sent to the hospital with gunshot and stab wounds following a similar conflict with farmers.

According to a press release from the Public Security Ministry on Sunday, police have been in the area since the conflict began to control the situation. The release said that police are in control of the situation, but according to Suárez, only two policemen are present most nights, stationed with the Bribrí on the farm.

Presidency Vice Minister Ana Gabriel Zúñiga has been leading mediation between the indigenous and non-indigenous groups for the last two weeks, and arrived in Salitre last night to meet with police and leaders of both factions.

“We have been intervening for several days to maintain the fewest number of conflicts possible between indigenous and non-indigenous people,” said President Luis Guillermo Solís Monday.

“We have signaled that the only way to resolve the problems in this area and other affected by agricultural conflicts is with negotiation. There is no other way,” he added.

“This is an immediate priority for the government,” Ricardo Sánchez, a political adviser to the vice minister, told The Tico Times. “The president has instructed the vice ministry to dedicate its complete attention to the issue.”