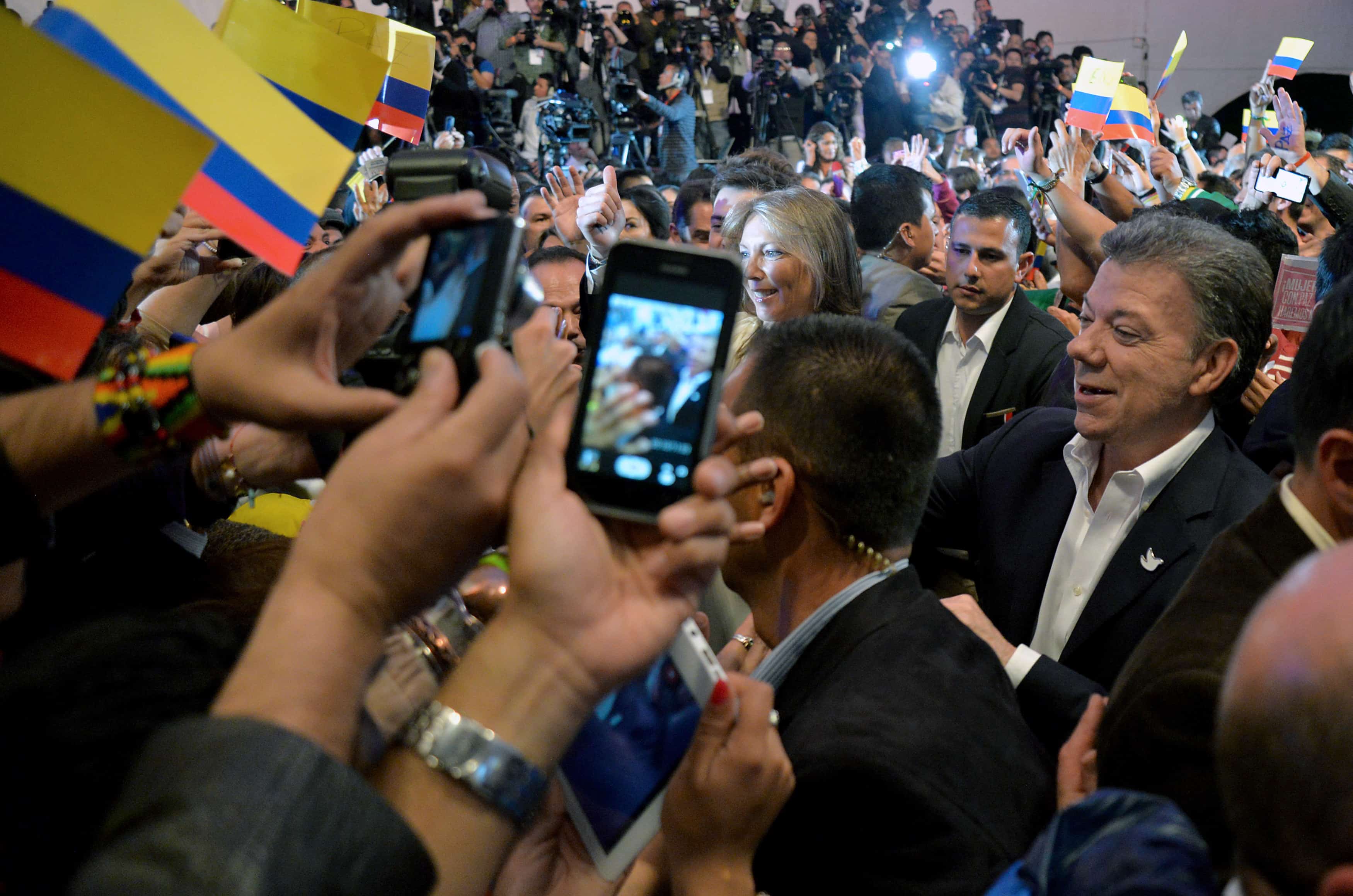 Colombian President Juan Manuel Santos, right, celebrates after learning the results of a runoff presidential vote on June 15, 2014, in Bogotá. Santos was re-elected with 50.90 percent of the vote, compared to 45.04 percent for the more conservative Óscar Iván Zuluaga. (Diana Sánchez/AFP)

Santos defeated Óscar Iván Zuluaga, a tough critic of the 18-month-old talks whose first-place finish in the opening round of voting last month forced Sunday’s runoff and threatened to derail negotiations with the guerrillas.

But with a victory margin of 51 percent to 45 percent, Santos secured a comfortable win that could give his negotiating team additional leverage with FARC commanders. It also came as a relief to supporters whose hopes for a historic treaty have increased as the talks have advanced beyond any previous truce attempt.

Greeted by supporters to chants of “Peace, peace, Colombia wants peace,” Santos emerged with tears welling in his eyes and told them that they “voted to change fear into hope.”

The president also said Sunday’s outcome carried a clear message to the rebels that “this is the end.”

“We have to finish this with seriousness, and decisively,” he said. “This is the end of 50 years of violence.”

Santos is considered one of Washington’s closest allies in Latin America — a reliable drug-war partner who wants to deepen Colombia’s free-trade ties to the United States.

But analysts say the center-right Santos won in part because of the support of the leftist Clara López, who won 15 percent in the presidential race’s first round last month. Her support base appeared to have helped Santos win critical votes here in the capital, Bogotá.

Still, the broad backing for Zuluaga, a protege of powerful former President Álvaro Uribe, seemed to reflect the degree to which Colombians harbor divided and even contradictory sentiments about ending their long-running, painful civil conflict, which has left more than 200,000 dead.

Although polls have long indicated that a majority of Colombians want peace with the insurgents, they are wary of an agreement that would allow FARC leaders to get off free after relying for years on kidnappings and cocaine trafficking to finance their rebel army.

Zuluaga, Uribe’s former finance minister, appeared frequently alongside his tough-talking former boss, leaving many voters nostalgic for a leader who treated the guerrillas as enemies to be exterminated, not bargained with. He slammed Santos for using the sensitive negotiations as a campaign pitch.

With a new four-year term and a fast-growing economy, Santos has a powerful mandate as his government heads into negotiations with FARC commanders about some of the most sensitive issues.