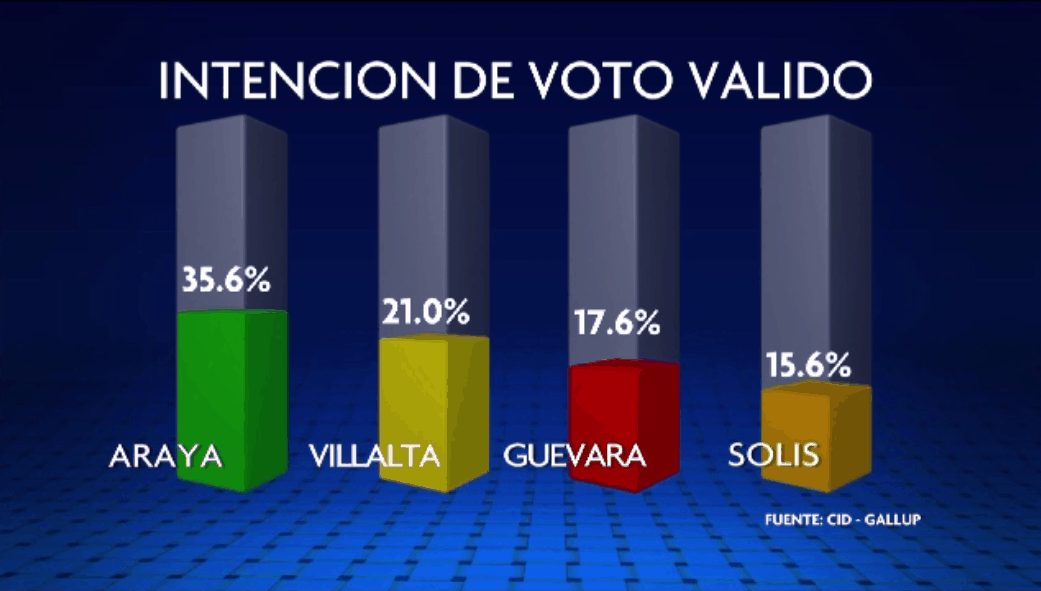 A new CID-Gallup poll conducted for Repretel Channel 6 has ruling party candidate Johnny Araya holding on to his lead less than a week before Sunday’s presidential elections. But Araya remains 5 percentage points short of avoiding a run-off, with three candidates battling for second place.

In a controversial decision Monday, the country’s largest paper, La Nación, admitted to cancelling its final presidential election poll. But at least one public opinion poll now has been released the week before the election.

Coupled with the recent polls in January (Unimer and University of Costa Rica), the most likely outcome is a runoff between Araya and Villalta, according to the polls.

Libertarian Movement Party candidate Otto Guevara sits in third place at 17.6 percent. Meanwhile Luis Guillermo Solís, of the center-left Citizen Action Party, continues his steady climb back into the race with 15.6 percent – more than double of what he captured in the last poll.  Social Christian Unity Party candidate Rodolfo Piza appears out of the race at 6.5 percent. “Other” party candidates polled at 3.6 percent.

The poll has a margin of error of 2.8 percent. CID-Gallup surveyed 1,202 total registered voters between Jan. 14-25, and some 20 percent of respondents remained undecided.

A mid-Jaunary CID-Gallup poll gave Araya 39 percent of the vote, Villalta received 26 percent and Guevara 18 percent. The latest results move closer to showing what the two other prominent polling firms in the country are showing – which is a neck-and-neck race between Araya, Villalta and Guevara.

Solís however is the lone candidate who keeps seeing his support increase. In the previous poll, support for him only tallied 7 percent. Still, with a week to go he has much ground to gain.