Paddling the Sarapiquí, with monkeys and metaphors 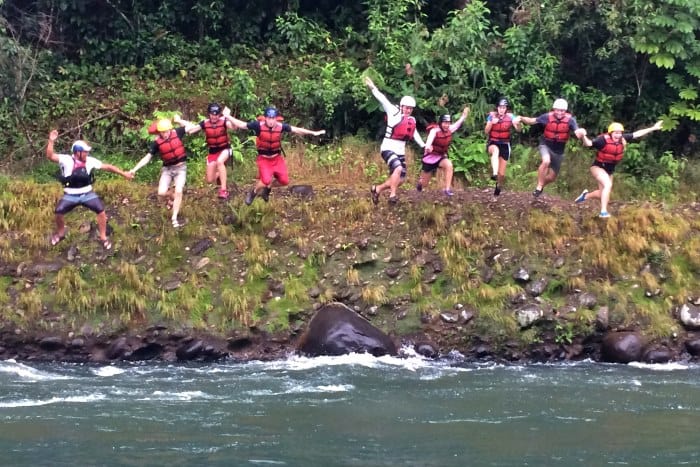 A bunch of rafters jump off a cliff into the Sarapiquí River. ((Courtesy Outward Bound Costa Rica))

There’s something objectively odd about whitewater rafting. You sit in an inflated rubber boat with the current pulling you over boulders bigger than your body, and the only way to put on a “seat belt” is to wedge your feet into crevices on the bottom edges of the boat.

It’s total lunacy. But at the Sarapiquí River, it’s what you do.

Melanie and I met with Lauren and Outward Bound Costa Rica in San José on a sunny March morning and, along with a group of writers, headed north for the Sarapiquí River. We were hoping to experience several of Costa Rica’s microclimates, so as luck would have it, our sunny morning in San José quickly turned into gray skies and rain in Heredia.

In the Sarapiquí Valley, all this rain sustains a lush expanse of lowland tropical forest known for its rich biodiversity. The United Fruit Company used to cart bananas to Puerto Viejo de Sarapiquí, where they were put on boats to the Caribbean for shipment to the United States. That ended with completion of the railroad linking San José and Puerto Limón in the late 1800s, after which the area was neglected economically.

Today the Sarapiquí Valley is known for extreme adventures both aquatic and terrestrial — whitewater rafting, kayaking, zip-lining, rappelling, horseback riding and mountain biking. It’s an increasingly popular destination that remains wonderfully unspoiled. There was no smell of tour bus exhaust, only fresh, clean air, as we put our rafts into the river on the side of a muddy road.

Our guide for this float was a Tico named Chloe, who alternated between English and Spanish and joked that he had no experience in rafting.

“This is my first time on the river,” Chloe dead-panned.

Once in the water, it was clear that this wasn’t Chloe’s first rodeo. He admitted that he divides his time as a river guide between Costa Rica and Colorado, depending on the season.

Before setting off, Jim told us that Outward Bound sees obstacles on a journey as a metaphor.

Our metaphor moment came after pulling our raft over for some cliff jumping. We dutifully climbed the cliff and jumped into the water. I couldn’t help noticing that I narrowly missed a giant boulder jutting from the side of the cliff.

Next idea: We should all hike back up and jump at the same time.

Melanie was nervous about the prospect of everyone jumping together while holding hands, and considering my close shave with a boulder, I could see the potential for disaster.

But Jim, the slender outdoorsman leading this adventure, was able to talk Melanie off the cliff by presenting it as a metaphorical challenge.

Maybe this jump that made her so nervous represented a larger leap in life that she needed to take.

OK, OK, so Melanie was in. We all joined hands and jumped. Splashdown! Success! And no blood in the water.

After hoisting ourselves back into our rafts, we finished our paddle admiring the sights and sounds of the dense forest around us.

I was excited to hear and actually see a pack of howler monkeys for the first time. They were high enough in the trees that they were rustling blurs to my eyes, but I was still excited to see what a small frame emits such a horrific sound.

We ended our day at a restaurant along the river, talking excitedly about everything we had just done. We paddled, we jumped, we landed, we survived, we were going home. There’s got to be a metaphor there.