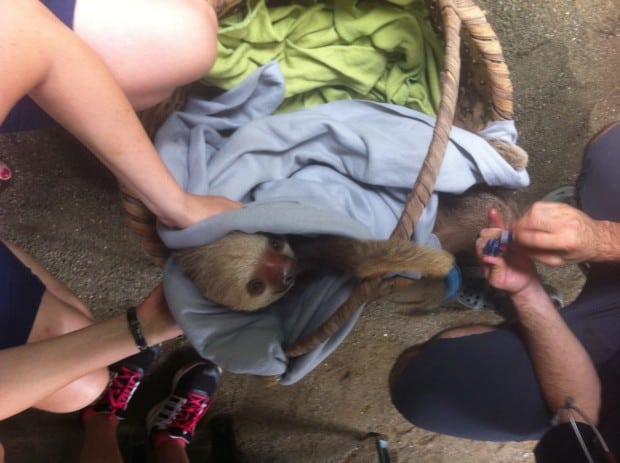 PUERTO VIEJO DE TALAMANCA, Limón — Here’s something you don’t see every day — a two-toed sloth getting its toenails painted blue.

“We paint them so we can recognize them in the wild,” says Encar García, cofounder of the Jaguar Rescue Center, a Noah’s ark of traumatized animals being groomed for reintroduction to the wild in a virgin jungle on Costa Rica’s south Caribbean coast.

That would explain why two other sloths have their claws painted red and yellow.

A Spanish-trained veterinarian, Ferran Alegre, 30, injects each of the sloths with a sedative before picking them up and moving them — by the scruff of their necks, to avoid their teeth — into a cage for transport to La Ceiba, the reserve where they will be placed in a transitional environment to return to the trees when they’re ready.

The animals routinely brought to this place by police, park rangers or ordinary citizens have all been injured, orphaned or otherwise distressed in life-threatening ways.

“A lot of our monkeys come here because people try to keep them as pets,” says tour guide Dexter Lewis, 26, standing in front of an enclosure where three baby monkeys — spider, capuchin and howler — are playing with each other and a human volunteer sitting on the floor.

“What happens is that people around here in the area, they find the monkeys, or sometimes they will kill their moms, get the little babies and try to give them as a present to their kids,” Dexter says. “They often get confiscated by the police, who end up bringing them here.”

The spider and howler monkeys are wrestling like brothers, as if unaware that they are different species. This would never happen in the wild, Dexter says, and will stop when they get bigger.

“One of the most common problems as well is that a lot of times they try to cross the road and they jump on cables, and often they get electrocuted, and most of the time their mom will end up dying,” Dexter says. “The baby, because it’s on the back, a lot of the time they don’t get the shock. … So usually the babies survive.”

Electrocution by power lines also injures or orphans sloths, and these and other species are sometimes attacked by dogs, are injured falling out of trees or their parents are shot by farmers. Enter the Jaguar Rescue Center.

Located just south of Puerto Viejo between Playa Cocles and Playa Chiquita, this rescue center (don’t even think of calling it a zoo) takes care of these vulnerable animals’ physical, mental and emotional needs — doctoring them, feeding them, mothering them.

It may seem counterintuitive, but the staff here acclimates the animals to human contact in order to free them of the need for human contact. The monkeys are frequently taken into the forest, where they hop off the humans’ shoulders and climb a tree.

“The females … when they become sexually mature is when they will start staying out because they want to find a group or find a boyfriend to join in the forest.”

Some animals will thrive here but can probably never be released, he says. He shows us a tamandua anteater feasting on a termite’s nest in a bucket, and he says when it first came here it constantly walked in circles, and the staff thought it was blind. A vet determined that it could see, but was probably brain-damaged from a head injury. It will not climb trees to find termite’s nests, so the staff has to climb trees to find the anteater’s lunch.

“Where is the pelican?” another staffer asks Dexter (a question you don’t often hear.)

“I don’t know, probably over there,” says Dexter.

The missing pelican, which can’t fly because of a broken wing, eventually finds our group and marches toward us looking ornery.

Dexter advises that we make room for it to pass, or otherwise it may peck at us. Dexter says they bring the pelican fish to eat and even take it to the beach to flex its wings in its natural environment.

Perhaps the most fabulous animal here is a young ocelot with black and brown spots and black stripes on the face who licks the arm of a volunteer before curling up for a nap.

Probably the cutest is the diminutive margay cat, which has the oversize eyes and the curiosity of any kitten.

By the way, don’t expect to see a jaguar at the Jaguar Rescue Center. Founded five years ago by Spanish primatologist Encar García and Italian herpetologist Sandro Alviani, the center was named after an orphaned jaguar they tried to save years ago. It lived only two days, and nobody has ever brought them another one.

But random mammals abound: Here’s a Central American agouti, a guinea pig cousin with a beautiful coat; there is a family of deer that sometimes gets too feisty; and here is a shy opossum hiding in a tube.

The injured birds include owls, hawks and toucans, and there are plenty of reptiles and amphibians — a crocodile blind in one eye, a large collection of snakes and a pond full of frogs.

But the stars of the show today are the sloths — who have names like Conan, Dante and Tyson — who are graduating from rehab with brilliantly painted claws.

May they soon get back to doing what sloths are supposed to do — climb a tall tree, munch a bunch of leaves and fall fast asleep.

Directions: From Puerto Viejo, take a car, taxi or bike south of town on the main road to Cocles, 2 km away. Look for the big Hotel Cameleón on the right, then keep an eye out for the Jaguar Rescue Center sign on the right. It’s easy to miss — look up www.jaguarrescuecenter.com, and the main image on that page will be on the road sign.
Hours: Tours at 9:30 and 11:30 a.m.; closed Sundays.
Cost: ₡9,500 ($19) for adults, cash only; kids under 10 free.